The visit comes as tensions between the two countries have risen in recent months.

The Turkish government nixed a visit by a German parliamentarians to a larger German force at the Incirlik airbase earlier this year.

In response Germany began redeploying German forces from Incirlik to Jordan. In early July, Germany transferred an Airbus A310 refueling aircraft to an airbase in Jordan from Incirlik. The tanker conducted its first mission from the Hashemite Kingdom on July 11th. The German Luftwaffe had also passed a group of Tornado fighters at Incirlik. Those aircraft will undergo some maintenance before redeploying to Jordan by early October.

“The relocation of the reconnaissance component is logistically more challenging due to a larger amount of partially sensitive equipment to be moved,” said Tobias Luckau a spokesperson for the German military in a written statement. Luckau also stated that the redeployment was being made do to “political reasons.” Less than a hundred German soldiers remain at Incirlik.

The Legacy of Lawrence

The Jordanian airbase at Azraq where the German forces will transfer to has had an unusual history. It began life almost a century ago in 1918 when British sought to supply an Arab rebellion against the Ottoman Empire during the First World War. The most famous British officer in Ottoman Jordan was T.E. Lawrence of “Lawrence of Arabia” fame. 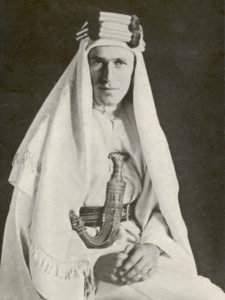 owell Thomas. “With Lawrence in Arabia”, book is in public-domain, full text available at Archive.org; originally from University of Toronto

While Lawrence of Arabia might be an obscure figure for the Luftwaffe officers stationed in Jordan in Germany he is not forgotten. Turkish President Erdogan has used the history of Lawrence of Arabia to criticize Turkey’s perceived enemies in the past.

“Lawrence was an English spy disguised as an Arab…there are new voluntary Lawrences, disguised as journalists, religious men, writers and terrorists,” he famously noted in a speech in Istanbul. Lawrence of Arabia is best remembered for the 1962 Hollywood film of the same name.

Turkey’s ongoing application to the join the European Union has been a festering source of tensions for years. However, this year those tensions spilled into the open when German Foreign Minister Sigmar Gabriel said in August that Turkey would never be a member of the European Union a comment that drew a rebuke from Foreign Minister Mevlüt Çavuşoğlu who said that Germany was “crossing the line with these comments.”

In recent months Germany has prevented Turkish political rallies in Germany, Erdogan has compared such moves to Nazi tactics. Not to be outdone Germany’s finance minister has compared the tactics of the Turkish government to those of communist East Germany.

Germany’s redeployment to Jordan is not just a byproduct of tensions between Berlin and Ankara. German-Jordanian relations are robust by comparison. Additionally, the move is part of a broader NATO strategy to develop new relationships and change regional force posture.

Jordan is both a front-line state and a vital ally in the war on ISIS. NATO’s Secretary General Jens Stoltenberg has called for more NATO involvement in Jordan as the country is one of the region’s “islands of stability.”

General James Conway, the retired former commandant of the U.S Marine Corps, said in an interview in Paris that he does not expect American forces to join the Germans in leaving Turkey for Jordan. “My experience has been unlike what we have seen in Europe, and the Pacific Middle Easterners are more reticent to have a U.S. [military] presence,” Conway said, “Now even the King of Jordan might have significant objections [to a larger U.S. presence].

For now the 2,200 American troops stationed at Incirlik will not be joining their German comrades in a shift to Jordan.

Security concerns also remain over Incirlik in particular from terrorist attack. This summer, Turkish authorities arrested a Russian national who was allegedly planning to attack the Incirlik base with a drone.

However, “green-on-blue” violence is almost unknown in Turkey. That Germany would undertake such a risky redeployment suggests the broken state of Turko-German relations at present.