10 REASONS WHY TRUMP MAY CONQUER THE WHITE HOUSE

10 REASONS WHY TRUMP MAY CONQUER THE WHITE HOUSE

Against all odds: the impossible may be possible

Against all odds: the impossible may be possible

With both Kasich and Cruz out of the race, the impossible seems possible now with populistic Donald Trump becoming the next President of the United States on the ticket of the Republican party.

Hillary Clinton is the front-runner still.

But here are 10 reasons why Donald Trump could really win in November and enter the White House against all odds:

Clinton is seen as an extension of both Obama’s presidency and her husband’s, making her a strong symbol of the establishment at a time when voters are fed up with Washington. Some voters are also fed up with the Democratic party after Obama’s two terms of office, so it is less likely that the same party can hold the White House for a third term in a row. Trump represents a departure from the establishment, similar to Sanders’ socialist platform, and that will help him against Hillary.

Trump could appeal to middle class voters who are struggling. Those who want to end the stagnation of the current economy could turn to Trump for an alternative to Clinton, who could be seen as a continuation of the Obama legacy.

In a new CNN poll, Clinton was 13 points ahead of Trump overall (54% to 41%). While she is the more trusted candidate on many issues, when it comes to the economy, voters said Trump would do a better job handling things.

Trump’s brash style allows him to dictate the agenda of interviews and debates. He is able to discuss issues he chooses, while Clinton is more reactionary. This gives her a disadvantage, as she allowed her opponents to set the terms of engagement in debates in both the 2008 and 2016 primary campaigns.

Trump can change his position on any topic without accountability, and he isn’t tied to a voting record. Here are a couple of examples:

On nuclear proliferation: “Biggest problem, to me, in the world, is nuclear, and proliferation,” Trump told the New York Times. He then advocated the idea that Japan and South Korea should obtain nuclear weapons to protect themselves from North Korea, saying “We’re better off if Japan protects itself against this maniac in North Korea, we’re better off, frankly, if South Korea is going to start to protect itself,”

On the Iraq War: He claims he opposed the Iraq War before it began, but when Howard Stern asked him in September 2002 if he thought invading was a good idea, he said “Yeah, I guess so…You know, I wish the first time it was done correctly.”

5. The Democratic Party is divided

Kasich and Cruz are both out of the race on the Republican side, leaving the reigns of the party to Trump. But, the Democrats are still busy choosing between Clinton and Sanders, leaving Hillary with less support and media spotlight.

Clinton already has 2,205 of the 2,383 delegates needed to win the nomination, while Sanders has only 1,401. There are 1,159 delegates not yet allocated, and Sanders would need almost all of them to secure the nomination. Sanders, however, has stated that he will continue to keep fighting until July’s Democratic convention in Philadelphia.

While there are some republicans who have vowed that they will never back Trump, others will support him simply out of GOP loyalty, including these prominent Republicans:

.@newtgingrich: “@realDonaldTrump may turn out to be the most effective, anti-left leader in our lifetime.” #Hannity pic.twitter.com/2jen2RkYH2

Ok. So the choice is between a fireman with modest preparation and an serial arsonist whom married into the job.

There’s a lot about Donald Trump that I don’t like, but I’ll vote for Trump over Hillary any day.

Trump has accepted $12 million in donations and self-funded his campaign with $36 million. To face off with Clinton, he will need more capital, and it looks like he will get it. According to an interview with The Washington Post, he will enter a joint fundraising agreement with the Republican National Committee, and the deal will be finalized within the week. He must then begin seeking funds from top GOP financiers and lobbyists.

The media needs an audience, and Trump’s callous way of speaking and constant controversy attracts viewers. As the prospect of Trump becoming president becomes more likely, more people are becoming afraid and tuning into the story. The result is that Trump gets more free media attention than he deserves, and that helps his campaign. 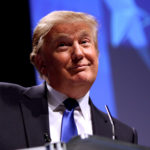 By far, the scariest reason Trump may win lies in the Electoral College map and polling numbers. While Trump has incredibly low favorability ratings, he is still only 13 points behind Clinton in the latest polls.  He is unlikely to lose many red states to Clinton, so achieving 270 electoral votes would be far from impossible, especially if he could swing former Reagan Democrats in Florida, Ohio, Pennsylvania, Virginia, and Wisconsin.