Siege And Starvation in Aleppo

Siege And Starvation in Aleppo

Assad’s attempt to crush the rebellion

Assad’s attempt to crush the rebellion

The situation in Syria is still a disaster with ISIS and the Assad regime raining fire upon the innocent people of Syria. But while the world is focused on ISIS in Mosul, the people of Aleppo silently scream,as they are starved out by a brutal enemy.

Today residents of Aleppo, Syria are waiting in lines for bread. The last major supply route to rebel-held Aleppo was captured on June 7th by the Assad regime and its Russian and Iranian backers. These particular attacks have left over 100 dead, and around 300,000 civilians are now without access to water, food, medical supplies, and fuel.

The area captured overlooks the last road into the east part of Aleppo, leaving the supply route open to artillery and sniper fire.

While the rebels have been stockpiling supplies for months, if the US and its allies don’t step in, the rebels will not be able to keep the regime at bay and Aleppo will fall along with most of the hopes of the five-year rebellion against President Assad.

Lina Khatib, the head of the Middle East and North Africa program at Chatham House in London, says the regime has used this strategy of siege and starvation before, “This could last for a very long time, thereby basically replicating some of the scenarios that we’ve seen in other areas in Syria like Hama in the past, in which the regime uses sieges and starvation as ways to break the populations in areas it is trying to control.” 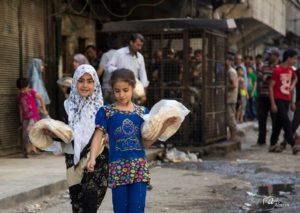 The UN and other aid agencies have declared that they only have enough food to last one month for 145,000 people, which is just enough for half the population. According to Reuters, an unnamed opposition official has said that rebel-held areas of the city have stockpiled enough food supplies for months, though some are already running out. Prices are now three to five times higher for non-perishable foods and the few fresh foods that are available. With stockpiles dwindling, citizens are being advised to adapt and ration themselves.

No relief is in sight for the few doctors currently in Aleppo, who are now unable to rotate in and out of the city. Hospitals are common targets of airstrikes by the government, and there is a risk of medical supply stockpiles being targeted as well.

The significance of Aleppo for the rebellion

Assad is turning up the pressure on the rebels across Syria, and Aleppo is his attempt at a death blow to the rebellion.

If the siege continues, it will be a major blow to the mainstream rebellion in Syria, but it will not extinguish it entirely.

Jihadists, Kurdish forces, and rebels will still exist. Tactics of the rebels will change from being larger and more organized to smaller and more individual insurgent-style. According to Lina Khatib, the head of the Middle East and North Africa program at Chatham House in London, “Even if the siege manages to break rebel groups as we know them, it will not put an end to insurgent activities against the regime. This means the transformation of tactics among Syrian rebels from operating in organized groups to operating as insurgents.”

The moderate rebels are losing sources of outside support as the US and other Western governments focus their attention on fighting extremists, particularly ISIS and Nusra. It is possible that Turkey, a major supporter of the rebellion, may also turn away from aiding the rebels following the ISIS attack on the Istanbul airport in June.

It appears to the rebels that the US is making things worse by discussing coordinated air strike options on ISIS and Nusra with Russia, a major military backer of the Assad regime. Emile Hokayem, a Syria analyst at the International Institute for Strategic Studies, says that Russia is “playing hardball, because they think the more hardball they play the more they’re going to get, and it’s happening…The U.S. unintentionally is making things worse.”

While the siege continues and the risk of starvation increases by the day for the 300,000 civilians, there is still hope for Aleppo. Rebel authorities are currently working on creating new routes to get supplies into the city. There is also the possibility of another fleeting ceasefire or a potential breakage of the blockade by rebel fighters from the neighboring city Idlib.