The 2015 Arab Opinion Index, the largest public opinion poll in the Arab region, has conducted 18,311 face to face interviews in 12 separate Arab countries. It’s findings are of great importance to anybody trying to understand were the general population stands in the conflicts we are going on in the Middle East.

The poll is conducted every year to find out how the Arab speaking world thinks about the most pressing political issues of the day:

This year questions revolved around,  Iranian nuclear deal, the accent of ISIS, and the Syrian revolution.

Furthermore the poll explore more fundamental issues such as Arab citizens’ attitudes towards democracy, the role of religion in civil society, and their genreal outlook on the political situation in their home-countries.

One of the key findings is that the Arab world as a whole is overwhelmingly opposed to ISIL.  89% of respondents said that they have negative views of the Islamic State, with only 7% viewing the terrorist organization positively. This pattern also holds up if only those are asked that view themselves as  “very religious”: 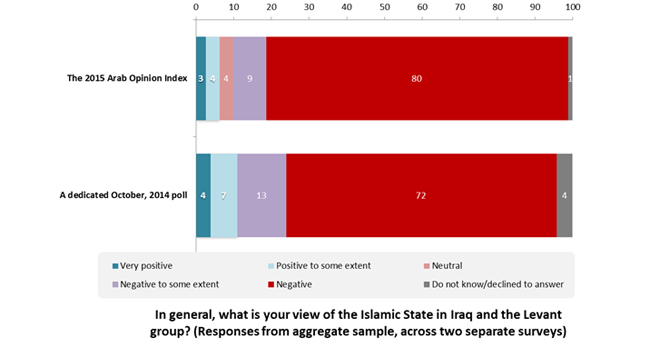 One of the issues on the top of the list for most Arabs is the continued suffering of the Syrian people.However, no consensus exists among  Arabs regarding the best way to fight ISIS and Islamic Terrorism in general, although a majority (62%) of the Arab public views regime change in Syria as a necessary precondition for peace: 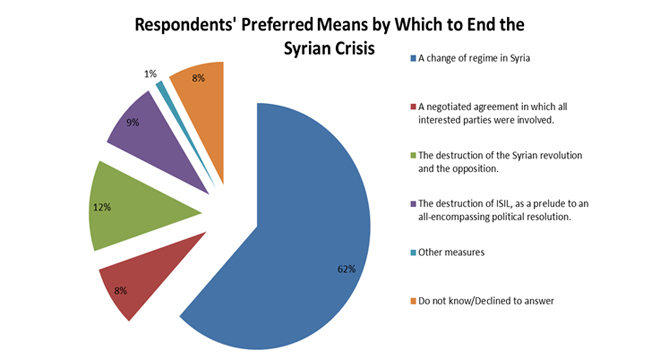