The Trump administration is set to reduce the size of several national monuments created by his predecessors.

The Trump administration is set to reduce the size of several national monuments created by his predecessors.

The battle over the fate of an Obama-era National Monument involves Native American groups, outdoor recreation merchandisers, uranium miners and disparate other groups.

While the Trump Administration is reviewing several national monuments, the fight has been fiercest over the fate of Bears Ears – a 1.35 million acre area containing pine trees, mountains, and Native American ruins.

In December 2016, Obama’s lame duck decision to create the Bears Ears National Monument in San Juan County Utah has ignited lingering federal lands management issues, created vows of a lawsuit and divided groups within the Navajo Nation.
Under the power of the 1906 Antiquities Act, the President of the United States can create national monument by fiat. Subsequent Presidents does not have the power to remove that designation but, presidents have reduced the size of the monuments.

The 1906 Antiquities Act was created specifically over concerns about the fate of Native American artifacts in the Southwest. Environmentalists have long sought to create the area within the Bears Ears into a national monument though the overwhelming majority of the land was already under various types of federal control before the monument designation. Plans to create a national monument in the area date to at least the 1930s.

What made the most recent was its inclusion of strong input from Native American groups. Of five Native American tribes including the Navajo Nation, the Hopi, the Uintah & Ouray Ute, Ute Mountain Ute and Zuni tribal governments all supported the designation.

“You can call it co-management, you can call it our seat at the table as tribes in regards to helping manage federal lands,” he told a group of Navajos, not all of whom shared his vision of for the monument.

Sitting at the back of the hall was Betty Jones who shook her head at Nez’s words. Jones is a nonagenarian Navajo medicine woman who lives in a three-room structure in the desert of Southeastern Utah.

Jones has seen San Juan County change dramatically within her lifetime. She remembers the nearby town of Blanding when it was only a single building. She also has some uncomfortable memories such as Ute bands selling their children to local Navajo for food during the winter after the Posey Rebellion, perhaps the last of the so-called “Indian wars” in the 1920s. Indeed, she feels her entire life has been a struggle with a federal government.

Speaking to a reporter for few hours in her daughter’s home on the Northern edge of the Navajo nation. Her grandchildren and their friends run in and out of a neighboring room bringing in cold air. She admonishes them in Navajo, adding “please” to the end of her sentence.

“My late husband was promised access to the land for sheep grazing and its wrong for Washington to go back on its word,” she says as she lists the various plots of land that she believes she has grazing rights, her daughter unrolls maps to claimed land areas.

The Navajo Nation’s Aneth Chapter opposes the Bears Ears National Monument as does the Blue Mountain Dine, a Utah Navajo group that is not recognized by the Navajo Nation. The majority of Navajo Nation does support the monument.

The Utah Navajo opposed to the monument like Betty Jones feel they been targeted in misinformation and marginalized. In 2016 flyers posted in Southern Utah spoke of a party to commemorate the Bears Ears National Monument months “Everyone is invited except Utah Navajos” the flier read in part.
The Utah Navajos are not alone.

Utah’s entire congressional delegation has long opposed the monument. Rep. Jason Chaffetz (R-Utah) had asked a House Interior Appropriations subcommittee to refrain from funding the controversial monument. Utah Attorney General Sean Reyes had also vowed a lawsuit against the federal government. A committee of the Utah state legislature has also looked into acquiring the monument from the federal government.

Environmental activists worry about energy interests in the Bears Ears area. While there is some oil and gas potential in the area given low prices and the remoteness of the area most operators would likely prefer projects elsewhere. Environmentalists would prefer to see the development of the area as a haven for tourists and outdoor recreation.
The Bears Ears area is home to a few scattered uranium mining claims which while economically unviable at present – this could soon change. After the Fukushima disaster, global uranium prices took a hit but, with new nuclear plants planned in Japan, India and the United States some analysts believe that uranium prices could bounce back.

San Juan County is home to the only conventional uranium mill in the United States which soon hopes to begin processing ore from a mine in Northern Arizona – a sign of the changing fortunes of the industry.
The mill and resource extraction in Utah remains controversial topics. However, within San Juan County opposition to the proposed monument is near universal.

Jamie Bayless leads a group called the Stewards of San Juan County. The group isn’t opposed to the monument per say but, the way in which it was imposed on locals without their consent. 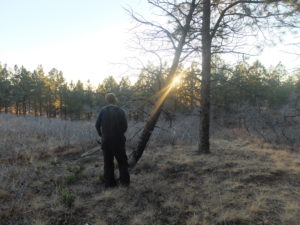 Byron Clarke is the Vice President of the Blue Mountain Dine, a local Navajo group who opposed the creation of the monument.
For years he has collected firewood from the Bears Ears for both himself and for free distribution among Navajos on the reservation.

“A lot of Navajos have been sold on the idea of co-management which is a myth,” he says.