In this interview Ghandour discusses Sudan’s foreign policy in relation to the war in Yemen Libya, Syria, and U.S sanctions

In this interview Ghandour discusses Sudan’s foreign policy in relation to the war in Yemen Libya, Syria, and U.S sanctions 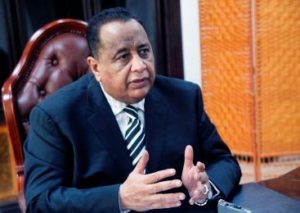 Question: What are Sudan’s foreign policy priorities at present?

A: Our priorities are first of all good relations with neighbors we always try to strike “zero problems with neighbors” and we are surrounded by six neighbors and each of those countries have either internal conflict or international problems at the moment. Taking a wider few to the East we have we Al-Shabab and Boko Haram to the West. We also have the problem of ISIS in our region. Solving these security challenges involves close coordination with our neighbors and that is our priority.

Sudan is both part of Africa and the Arab region so that is a priority before we look wider afield for allies in solving those issues. In nutshell our goal is to have our country at the heart of peaceful and integrated region.

Q: In 1995, the United States imposed sanctions on Sudan due to its support for terrorists like Bin Ladin and Carlos the Jackal. The former is now dead and the latter is now in prison after he was surrendered by Sudan to France. What is Sudan doing to ensure the Trump Administration lifts the sanctions?

A: In June 2016, we received and agreed up a five track plan between the United States of America and the Sudan.

The five tracks include counter-terrorism, an investigation into claims that we have a link to the Lord’s Resistance Army(LRA), Peace with South Sudan, Peace within Sudan and as well as humanitarian issues.

We engaged on this for 6 months with the Obama administration to relieve the sanctions and that happened in January this year. We have had several meetings on this process at the hieghest levels including with Dr. [Susan] Rice and we engaged with [Secretary of State] John Kerry. We had a lot of engagement and we are waiting for the final decision in July.

In the last week of April, we had more meetings with the U.S. government and both sides agree there has been 100% implementation from of the five track plan. Sudan has been contributing to U.S. counter-terrorism efforts since before the turn of the century and the Pentagon confirmed that there is no links between our government and Joseph Kony’s LRA.

On the basis of the last bilateral engagements things are moving forward.

Q: The fate of the sanctions aside Sudan is still-listed as a state sponsor of terrorism.

A: There will not be economic issues after July if things go smoothly. However, if the state-sponsorship designation continues it’s a diplomat paradox. Last year on 15th of June the outgoing CIA director [John Brennan] said Sudan is cooperating very well with U.S. counter-terrorism efforts. How can a country be cooperating on U.S. counter terrorism efforts yet remain on the state sponsor of terrorism list. The administration should work with Sudan to have its named removed from the state-sponsorship of terrorism list.

Q: Well to clarify Sudan is not under embargo its under sanctions.

A: I mean practically speaking it has been embargo on us because other countries are not trading with us with us due to U.S. sanctions. So Sudan shifted to Iran and other countries to help the national army to support a rebellion. A rebellion I might added aided by the same countries who were imposing this embargo. Everybody knows the South Sudan has been supported by the West and other regional countries. Iran is not our natural ally but, it was necessity. When you are pushed against a wall you find you can do anything.

Q: Earlier this year Sudanese President Omer Al-Baashir visited Ethiopia and called for the creation of a Horn of Africa economic community. His proposal was supported by his Ethiopian hosts but, what is the status this union?

A: Yes, the Horn of Africa economic community was discussed between Baashir and the Prime Minsiter of Ethiopia [Hailemariam Desalegn] and both leaders agreed it is an important issue that should be discussed. Additionally, Somalia and Djibouti have responded positively to the proposal. A meeting of experts has been scheduled for late June and then there will be a foregin ministers meeting. If things go forward there will be a summit and a declaration. We are hoping that this issue will come to a reality there is a lot in common between the countries in the Horn of Africa. There is a lot of potential for stronger economic partnerships between these countries and Sudan. Economic collaboration means collaboration on everything. This organization can work to ensure that we are better connected by road, rail and there is free movement of people and goods.

Q: Tell us a bit more about the war in Yemen which as you just mentioned was an important part of your shift away from Iran. Media reports suggest as many as 10,000 Sudanese troops are deployed in Yemen.

A: Yes, there are 10,000 Sudanese troops available. The number who are directly engaged are not less than that. We are involved in Yemen to support the legitimate government recognized by the international community that is fighting Houthi rebels backed by Iran.

The whole world will pay a price if it is not involved in stabilizing Yemen. Six Sudanese soldiers have paid the ultimate price in this conflict.

The Saudi – GCC led effort was based on a vote of the Arab League and is supported by France and the United States. We support the UN envoy on Yemen and we believe direct talks are the answer. We support the peace talks in Kuwait and President Baashir was part of a high level delegation ihere as well. The Kuwaiti Emir was very direct during negotiations with the Houthis and we are waiting for all warring parties to agree. We will continue to be engaged on that issues and direct talks with the Yemenis.

As you know Iranian officials have said “We are now taking the fourth capitol” regarding Sana’a and a reference to their control of other capitals in the region [ed: Beiruit, Bagdhad, and Damascus]

Q: Well another important country for Sudan during this period was Russia. Which leads me to the Syrian Civil War where Sudan has taken a position very close to Russia’s hasn’t it? Sudan does not believe that Assad has to go before a peace agreement can be achieved…

A: Let me separate this issue as these are two questions are relations. With the Russia we maintain excellent Russian relations. Russia has invested in our economy in particularly in gold mining. In fact we have good relations in all other fields. Russia supports Sudan and on the Security Council when we face unjustified pressure.

We have been clear on this with our other Arab allies. President Baashir said this again at the recent Arab League meeting in Amman, Jordan. Syria need direct negotiations between rebel groups and Assad. The Syrian Civil War will not be solved by foreign powers. It will be solved by discussions amongst the Syrian people. If what we said had been listened to earlier those hundreds of thousands of people would not have lost their lives

Q: There is a major conflict on your borders in Libya. What role is Sudan playing in Libya?

A: We are very concerned about the situation in Libya…This is a conflict with clear consequences for the world beyond our region as well. For example, the fighting Libya has made it difficult to combat illegal migration from our region through Libya or Algeria and onto Europe. One of concerns is of course the conflict in Libya will impact the on-going peace process in Darfur. In Darfur other than one or two holdouts there is now peace throughout the region. However, we are concerned that there are 600 rebels from the Minnawi faction of the Sudan Liberation Movement who are fighting in Libya with General Haftar’s forces. Those rebels could return any time with supported from Libya and re-ignite the war in Darfur.