How the Pope helped seal the deal

How the Pope helped seal the deal

Most problems had been resolved. The entire climate conference in Paris was waiting for a final statement. But the negotiators were still at work behind closed doors. There were still some issues to resolve and the historic accord was close to failure.

One of the issues was with Nicaragua, a small country in Central America.

It’s chief negotiator, Paul Oquist, simply refused to agree with the text that had been hammered out in many hours of painful back and forth. He and Nicaragua’s president Ortega fear that the Paris Agreement is to weak and will lead to a rise in temperatures of more than 4 degrees Celsius. Nobody could convince him to relent.

Then the somebody had an idea: Enlisting Pope Francis in the negotiators’ cause to find common ground.  The Pope had previously spoken plainly about the need to combat climate change. He left a mass especially to call Nicaragua, a deeply catholic country were the church wields considerable influence.

One of the most influencial catholics is Miguel Obando y Bravo. He was the Archbishop of Managua from 1970 until his resignation on 12 March 2005. On 25 May 1985, he was selected by Pope John Paul II to be cardinal in Central America. He was one of the cardinal electors who participated in the 2005 papal conclave that elected Pope Benedict XVI.

After the intervention of the Vatican and the Pope with his deep roots in South America,  the delegate from Nicaragua was still not content with the agreement but he abstained from blocking the document which was finally accepted by 196 states.

The Pope is very active promoting a better world with active Christian values. 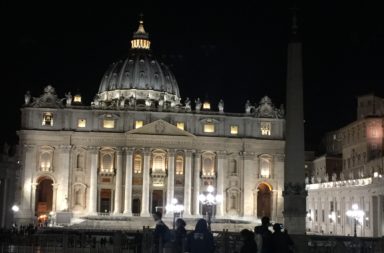