Eight women have been arrested for online modelling in Iran.

Their crime: not wearing headscarves.

In yet another crackdown on women using social media to post pictures, Iran has arrested eight women who work with online modelling agencies. This is an effort to stop women in Iran from sharing pictures on Instagram and other online portals, if their heads are uncovered by the traditional headscarf.  The objective is to preserve Islamic tradition. About 170 people have been rounded up for further investigations due to their involvement with online modelling – including make-up artists and fashion salon managers.

Their pictures online are considered as “threats to morality and the foundation of family,” as the female models have their heads uncovered.

Announcing the court’s decision, prosecutor Javad Babaei claimed that such representation of women in social media had been “making and spreading immoral and un-Islamic culture and promiscuity”.

Just for the record, it is compulsory for women in Iran to cover their hair in public since 1979.

Social media is a tricky space where one shares updates and pictures from the privacy of one’s home, but it is in fact sent out to a wide audience. Therefore, it is difficult really to say whether using social media is a personal, private activity which is witnessed by other users of the site, or is a completely public interaction.

However, cyberspace is part of a virtual world and is different from an actual physical space. Therefore, these arrests seem completely absurd. However, the Iranian authorities seem unshaken. If anything, they are actively increasing their efforts to clamp down on women’s use of social media.

Mostafa Alizadeh, spokesman for the Iranian Centre for Surveying and Combating Organised Cyber Crimes, asserted, “Sterilising popular cyberspaces is on our agenda. We carried out this plan in 2013 with Facebook, and now Instagram is the focus.”

Though arresting women for this reason seems like an extreme step, the Western world should not be too quick to judge the traditional beliefs held by the Middle East. To clarify this better, here is an enlightening cartoon drawn by artist Malcolm Evans: 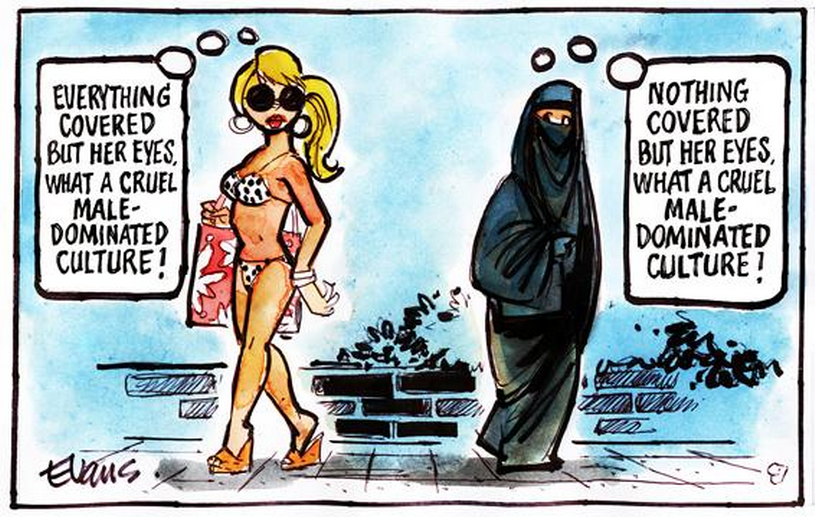 The crucial point here is that women should have the freedom to choose how they wish to portray themselves on social media, and should not be forced to dress one way or the other.