Demonstrating to the world: 'a war is only won after you have turned your enemy into a friend' (Eric Hoffer)

Demonstrating to the world: 'a war is only won after you have turned your enemy into a friend' (Eric Hoffer)

The following is the full text of a speech given by Japanese Prime Minister Shinzo Abe at Pearl Harbor.

Abe spoke on Kilo Pier overlooking the USS Arizona Memorial, part of the World War II Valor in the Pacific National Monument, in Joint Base Pearl Harbor-Hickam, Hawaii, adjacent to Honolulu, Hawaii, as part of a ceremony to honor those killed in the Japanese attack on the naval harbor.

I stand here at Pearl Harbor as the prime minister of Japan.

If we listen closely we can make out the sound of restless waves, breaking and then retreating again. The calm inlet of brilliant blue is radiant with the gentle sparkle of the warm sun.

Behind me, a striking white form atop the azure is the USS Arizona Memorial.

Together with President Obama, I paid a visit to that memorial, the resting place for many souls.

It was a place which brought utter silence to me.

Inscribed there are the names of the servicemen who lost their lives. Sailors and marines hailing from California and Michigan, New York and Texas, and various other places, serving to uphold their noble duty of protecting the homeland they loved, lost their lives amidst searing flames that day, when aerial bombing tore the USS Arizona in two.

Even 75 years later, the USS Arizona, now at rest atop the seabed, is the final resting place for a tremendous number of sailors and marines.

Listening again as I focus my senses, alongside the song of the breeze and the rumble of the rolling waves, I can almost discern the voices of those crewmen. Voices of lively conversations, upbeat and at ease, on that day, on a Sunday morning. Voices of young servicemen talking to each other about their futures and dreams. Voices calling out the names of loved ones in their very final moments. Voices praying for the happiness of children still unborn.

Each and every one of those servicemen had a mother and a father anxious about his safety. Many had wives and girlfriends they loved. And many must have had children they would have loved to watch grow up.

All of that was brought to an end. When I contemplate that solemn reality, I am rendered entirely speechless.

“Rest in peace, precious souls of the fallen.” With that overwhelming sentiment, I cast flowers on behalf of Japanese people, upon the waters where those sailors and marines sleep. 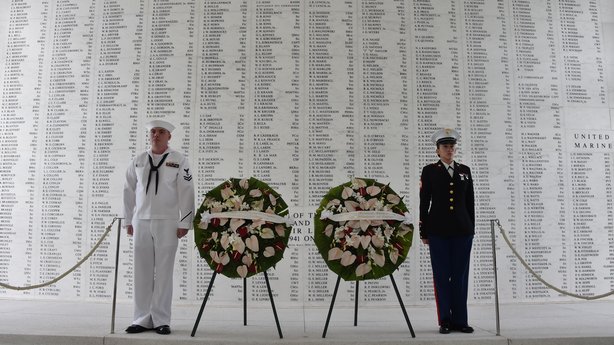 President Obama, the people of the United States of America, and the people around the world:

As the prime minister of Japan, I offer my sincere and everlasting condolences to the souls of those who lost their lives here, as well as to the spirits of all the brave men and women whose lives were taken by a war that commenced in this very place, and also to the souls of the countless innocent people who became victims of the war.

We must never repeat the horrors of war again.

This is the solemn vow we, the people of Japan, have taken. And since the war, we have created a free and democratic country that values the rule of law and has resolutely upheld our vow never again to wage war.

We, the people of Japan, will continue to uphold this unwavering principle, while harboring quiet pride in the path we have walked as a peace-loving nation over these 70 years since the war ended.

To the souls of the servicemen who lie in eternal rest aboard the USS Arizona, to the American people, and to all peoples around the world, I pledge that unwavering vow here as the prime minister of Japan.

Yesterday, at the Marine Corps Base Hawaii in Kaneohe Bay, I visited the memorial marker for an Imperial Japanese Navy officer. He was a fighter pilot by the name of Commander Fusata Iida who was hit during the attack on Pearl Harbor and gave up on returning to his aircraft carrier. He went back instead and died.

It was not Japanese who erected a marker at the site that Iida’s fighter plane crashed. It was U.S. servicemen who had been on the receiving end of his attack. Applauding the bravery of the dead pilot, they erected this stone marker. On the marker, his rank at that time is inscribed, “Lieutenant, Imperial Japanese Navy,” showing their respect toward a serviceman who gave his life for his country.

“The brave respect the brave.” So wrote Ambrose Bierce in a famous poem.

Showing respect even to an enemy they fought against; trying to understand even an enemy that they hated — therein lies the spirit of tolerance embraced by the American people.

When the war ended and Japan was a nation in burnt-out ruins as far as the eye could see, suffering under abject poverty, it was the United States, and its good people, that unstintingly sent us food to eat and clothes to wear. The Japanese people managed to survive and make their way toward the future thanks to the sweaters and milk sent by the American people.

And it was the United States that opened up the path for Japan to return to the international community once more after the war. Under the leadership of the United States, Japan, as a member of the free world, was able to enjoy peace and prosperity.

The goodwill and assistance you extended to us Japanese, the enemy you had fought so fiercely, together with the tremendous spirit of tolerance were etched deeply into the hearts and minds of our grandfathers and mothers. We also remember them. Our children and grandchildren will also continue to pass these memories down and never forget what you did for us.

The words pass through my mind; those words inscribed on the wall at the Lincoln Memorial in Washington D.C. where I visited with President Obama.

“With malice toward none, with charity for all … let us strive on … to do all which may achieve and cherish a … lasting peace among ourselves and with all nations.”

These are the words of President Abraham Lincoln.

On behalf of the Japanese people, I hereby wish to express once again my heartfelt gratitude to the United States and to the world for the tolerance extended to Japan.

It has now been 75 years since that “Pearl Harbor.” Japan and the United States, which fought a fierce war that will go down in the annals of human history, have become allies with deep and strong ties rarely found anywhere in history.

We are allies that will tackle together, to an even greater degree than ever before, the many challenges covering the globe.

Ours is an “alliance of hope” that will lead us to the future.

What has bonded us together is the power of reconciliation, made possible through the spirit of tolerance.

What I want to appeal to the people of the world, here at Pearl Harbor, together with President Obama, is this power of reconciliation.

Even today, the horrors of war have not been eradicated from the surface of the world. There is no end to the spiral where hatred creates hatred.

The world needs the spirit of tolerance and the power of reconciliation now — and especially now.

Japan and the United States, which have eradicated hatred and cultivated friendship and trust on the basis of common values, are now, and especially now, taking responsibility for appealing to the world about the importance of tolerance and the power of reconciliation.

That is precisely why the Japan-U.S. alliance is “an alliance of hope.”

The inlet gazing at us is tranquil as far as the eye can see. Pearl Harbor. It is precisely this beautiful inlet, shimmering like pearls, that is a symbol of tolerance and reconciliation.

It is my wish that our Japanese children, and President Obama, your American children, and indeed their children and grandchildren, and people all around the world, will continue to remember Pearl Harbor as the symbol of reconciliation.

We will spare no efforts to continue our endeavors to make that wish a reality. Together with President Obama, I hereby make my steadfast pledge.

Thank you very much.