The NATO Summit: What You Need to Know!

The NATO Summit: What You Need to Know!

The meeting united leaders to gear up against Russia

The meeting united leaders to gear up against Russia

Overshadowed by the devastation in the United States, Obama was in Poland for the NATO Summit, with a great deal of progress made, but much was still left on the table

July is the month of conferences for the United States with both the Democratic National Convention and the Republican National Convention, but the big one this week was the NATO summit in Warsaw, Poland. Leaders from all 28 of the NATO countries arrived to discuss area security, with the notable leaders being President Obama from the United States, David Cameron from the UK, Angela Merkel from Germany and Recep Tayyip Erdogan from Turkey. These few leaders made headlines for the developments at the NATO Summit. 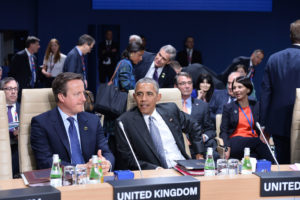 The United States made a lot of progress at the NATO summit by working with the other member countries to increase pressure on Russia. Included in this is 1,000 troops that will be stationed in Poland by the end of 2017.

Overall, the US has cut the number of troops from 9,800 to 8,400 overall, favoring a reduced but more strategically placed force, as the threat to the NATO region is becoming increasingly clear. 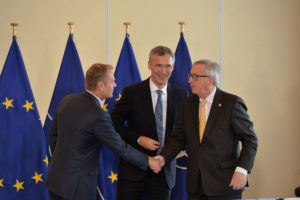 The US-led NATO signed a Joint Declaration with the EU for an intelligence sharing network. This will allow the two entities to act better, as they will now have more complete information on regional threats.

Russia’s ambassador to NATO, Alexander Grushko warned the group of a “spiral of confrontation” as he accuses NATO of building a “new Iron Curtain” separating and isolating Russia from Europe. A decision like this could have “military consequences” warned the Russian ambassador.

This all comes amid Russia announcing the deployment of nuclear missiles to Kaliningrad, a small part of Russia located between Poland and Lithuania. 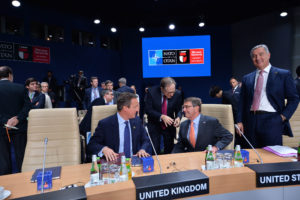 UK and the Brexit

This was a big topic of discussion, to reassure the world that while the UK has elected to leave the EU, they will remain a member of NATO, and will continue to play a major role in European security, with 500 UK troops being stationed in Estonia.

This summit comes at the perfect time, as tensions hit a new high between Germany and Turkey, with Turkey banning German MP’s from entering Turkey and a German satirist being prosecuted for insulting the Turkish President. After a meeting between the two heads of state, but no concrete progress was made. Erdogan made it clear that he needed the German government to publicly deny supporting the resolution that passed through parliament last month that recognized the Armenian genocide. 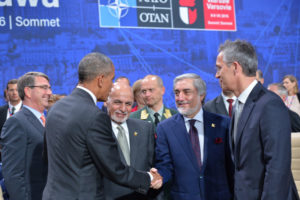 The security in Afghanistan is “precarious”, and as such, the NATO allies have elected to continue to aid the Afghan military in troop training until at least 2017. There will be about 13,000 troops remaining in Afghanistan, with an additional 3,000 from the United States.

Angela Merkel and other NATO allies have expressed a fundamental shift in Afghan policy, saying that the Taliban, while radical, are so prevalent that they must be a part of the solution in Afghanistan. “We have made it clear to everyone that in parallel with the political process, dialogue with the Taliban is necessary to advance a political solution” she said at the close of the summit. The Chief Executive Officer of Afghanistan (Yes, Afghanistan has a CEO…), Abdullah Abdullah, said “the threat of terrorism in our region is growing,…The security situation is not as it should be.”

Poland seemed to be the right venue for this summit, as members expressed concern over the Polish government asserting control over state media amid a dispute with the courts. The current government is very right-wing, and they trying to assert control over the appointments to the Constitutional Court and how it works. This has led to street protests and the EU has opened an investigation.