Nuclear weapons are here to stay, according to a report just released by The Stockholm International Peace Research Institute.

SIPRI is an independent international institute which does research into global arms and conflict. The annual report, titled Trends In World Nuclear Forces, discusses the world’s current nuclear arsenals and each country’s plans for the future.

The think tanks’ data shows that the number of nuclear weapons in the world is slowly in decline. On the surface, this appears to be a good thing for those in favor of disarmament and a safer planet. However, the report also shows that none of the countries with nuclear arsenals are prepared to give them up. In fact, their investment levels are all rising.

The world is preparing for fewer, but better and more modern, nuclear weapons.

There are currently nine countries with nuclear weapons: the United States, Russia, the United Kingdom, France, China, India, Pakistan, Israel and North Korea. Altogether, there are approximately 15,395 nuclear warheads among these countries, down from 15,850 in early 2015.

The decrease in nuclear weapons is mostly from the US and Russia, who post-Cold War still hold in excess of 93% of the world’s nuclear weapons. Despite the bilateral Treaty on Measures for the Further Reduction and Limitation of Strategic Offensive Arms (New START) in 2011, both countries remain slow at cutting back their inventories. Both countries are also actively investing in modernization programs, so there’s no sign of global disarmament measures any time soon. 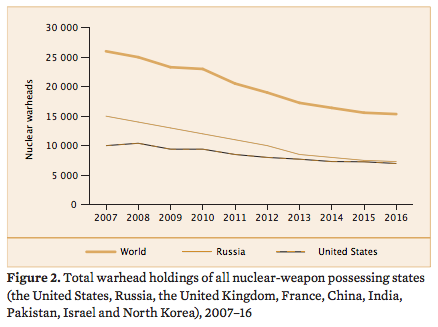 The US: Obama talks disarmament while investing in nuclear modernization.

Obama recently became the first sitting US president to visit Hiroshima. In his speech there, he made remarks clearly inconsistent with the US’ current nuclear strategy, by calling for a world without nuclear weapons.

“We may not be able to eliminate man’s capacity to do evil, so nations and the alliances that we form must possess the means to defend ourselves. But among those nations like my own that hold nuclear stockpiles, we must have the courage to escape the logic of fear and pursue a world without them.

We may not realize this goal in my lifetime, but persistent effort can roll back the possibility of catastrophe. We can chart a course that leads to the destruction of these stockpiles. We can stop the spread to new nations and secure deadly materials from fanatics.”

The US’ current stockpile contains approximately 4500 warheads. The US investment plan includes spending $248 billion from 2015-2024 on maintenance and updates, and some say the modernization program could cost up to $1 trillion over the next 30 years.

Hans Kristensen of SIPRI commented on the inconsistency of the rhetoric with the policy saying, “The ambitious US modernization plan presented by the Obama Administration is in stark contrast to President Barack Obama’s pledge to reduce the number of nuclear weapons and the role they play in US national security strategy.”

As previously reported on by Globalo, the US is planning to purchase 32 tons of heavy water as part of a deal with Iran to ensure compliance with their agreement’s constraints on Iran’s nuclear program. However, this $8.6 million deal will strengthen Iran’s nuclear program by allowing them to maintain and profit from a US-subsidized heavy water industry which can be used in the future to develop a plutonium bomb.

Russia’s current arsenal has about the same number of warheads as the US’, approximately 4490. They are currently replacing their Soviet-era weapons systems with more modern ones, while trying to maintain around the same number of weapons as the US. In the future, there is likely to be a further reduction in Russia’s inventory due to national financial constraints. 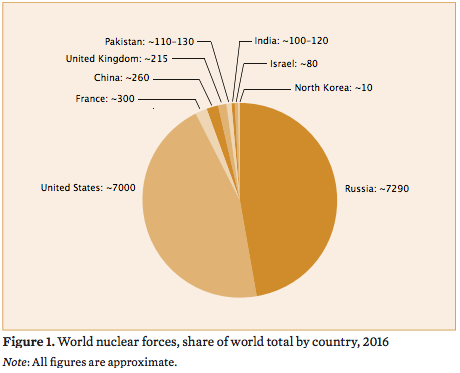 While other countries may have much smaller arsenals compared to the US and Russia, they are all deploying or planning to deploy new nuclear weapon delivery systems.

While not mentioned in the SIPRI report, but covered by Globalo, it is claimed by the Armenian Prime Minister Bagratyan that they have nuclear capabilities and the ability to develop them further. Yerevan has ties to both Iran and Russia since the dissolution of the Soviet Union, so this may be possible, and would be destabilizing for the Caucasus region if true.

Head of the SIPRI Nuclear Weapons Project, Shannon Kile believes the outlook for the world’s nuclear weapons situation is grim. Kile commented in a press release, “Despite the ongoing reduction in the number of weapons, the prospects for genuine progress towards nuclear disarmament remain gloomy. …All the nuclear weapon-possessing states continue to prioritize nuclear deterrence as the cornerstone of their national security strategies.”

In spite of Obama’s words at Hiroshima calling for disarmament, nuclear weapons are here to stay.