The next president of the United States of America will be a woman.

This is the result of a fact finding of GLOBALO, looking into the preference of voters.

Trump trails Clinton now and would need 100 more electoral votes, she only needs 14 to win. The gap is widening against the New York businessman.

Less than one month before the election dated November 8th, 2016.

These are the latest nation wide polling data from nine sources: 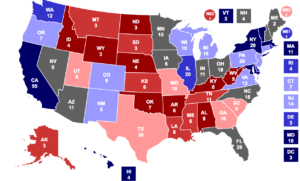 The Washington Post published the latest results of the Survey Monkey poll October 18, 2016:

I am starting to believe that the House will flip on election day. Democratic lead in generic ballot is growing. https://t.co/Ye1GFRW97z

As if we didn’t know Trump was finished…..he’s melting in the polls faster than snow in summer…..hallelujah! https://t.co/8kB09GvB31