THE 3 BIGGEST DEFEATS OF ISIS

THE 3 BIGGEST DEFEATS OF ISIS

Lost 14 % of its territory and three cities - Mosul and Raqqa next?

Lost 14 % of its territory and three cities - Mosul and Raqqa next?

The Islamic State (ISIS, Daesh) is still the most formidable terror force the world has ever seen.

It firmly controls two large cities with Mosul in Iraq and Raqqa in Syria.

In the current environment of low oil prices, reigning over large populations from whom it can extract taxes, is fast becoming the most important source of income for ISIS.

1. Sinjar. In November, Kurdish and Yazidi fighters took back Sinjar, in Iraq. This was accomplished with no substantive support from the Iraqi army.  The Alliance between Yazidis and Kurds was formed when PKK forces rescued thousands of Yazidis that had been singled out for execution in one of the worst mass killings committed by ISIS in the ongoing conflict. Together they also secured  parts of a strategic road between Syria and Iraq, thereby making it harder for Islamic State fighters to travel back and forth between the two countries. Apart from the rescue of thousands of entrapped civilians, the defeat of ISIS in and around Sinjar was one of the most significant tactical victories against the Islamic State.

2. Tikrit. The liberation of Tikrit saw Islamic State fighters face off against a coalition of Iraqi Army soldiers, some sunni mitias, a substantial Shia militia force, and coordination and tactical support from Iranian Quds force under the command of Gen. Qasem Soleimani. Ground troops were supported from the air by the US Air-Force. The cit was taken in march, but it took months to drive out remaining ISIS fighters. While the liberation of Tikrit was an important tactical victory that substantially hurt the Islamic State, to this day it is not complete. Residents of Tikrit are slow to move back into their homes, as the mostly Sunni population fears Shia militias who have committed acts violence against them during the clearing of the city, destroying hundreds of Sunni houses and businesses. Tikrit is one of the places in Iraq most vulnerable to future flare-ups of sectarian violence.

3. Ramadi. The Iraqi army was careful to avoid a second Tikrit when it moved against Ramadi, another ISIS stronghold which had been taken in May 2015.

No Shia-paramilitary was used to avoid sectarian tensions.

The Iraqi army had played a less than glorious role in the loss of the city when it fled before advancing ISIS fighter despite being better armed and equipped, and although it greatly  outnumbered the enemy.

Around Christmas 2015 Iraqi forces have entered the city center. They carefully moved their ways through booby-trapped streets and buildings as they cleared it of remaining ISIS fighters and suicide bombers.

The fight is far from over, and even when ISIS is defeated, the region will look very different to what it was before the conflict.

“Coupled with other recent ISIL losses across Iraq and Syria, including at Tikrit, Bayji, al Hawl, the Tishrin Dam and Sinjar, the seizure of the government center clearly demonstrates that the enemy is losing momentum as they steadily cede territory,” said Army Gen. Lloyd J. Austin III, the U.S. Central Command commander. “Looking ahead, I expect our partners on the ground in both Iraq and Syria, with coalition assistance, to continue to roll back ISIL gains as we work together to defeat this enemy.”

“The Iraqi security forces, including the counterterrorism service, the Iraqi army, the Iraqi air force, the federal and local police and the tribal fighters, have demonstrated their resolve in the fight for Ramadi,” said U.S. Army Lt. Gen. Sean MacFarland, the CJTF-OIR commander. “I also want to commend the thousands of troops of the coalition who have made this success possible … This success belongs to them as well, and we will all work together to defeat our common enemy.”

The next target of the coalition forces is Mosul in Iraq, with more than two million people the largest city in the hands of the terror organization. A lot of military is needed for this task.

“2015 was a year of liberation, 2016 will be the year of great victories, terminating the presence of Daesh (ISIS) in Iraq and Mesopotamia,” he said. “We are coming to liberate Mosul, which will be the fatal blow to Daesh.”

End of November Kurdistan Region President Masoud Barzani suggested  that his forces, the Kurdish Peshmerga, could travel to Raqqa, Syria and participate in an assault to liberate it from the Islamic State (ISIS). It is the “capital” of the self-proclaimed Islamic State “caliphate.”

“With many victims the Peshmerga have achieved considerable victories, and our current priority is to fight ISIS,” Barzani explained. “Until we eliminate this organisation in Iraq and Syria, the threat of terrorism will remain present in the region and the world. Under a strong international coalition, it is possible that the Peshmerga also form part of the forces that will free the city of Raqqa.”

The coalition will continue to take out top-leaders of ISIS in Iraq and Syria with air strikes and special forces, like a dozen killed in 2015.

Peace-negotiations by the UN about Syria will start early 2016.

The oil-and-money-flows will be strangulated more effective as well. Including more attacks on oil-trucks.

To defeat ISIS in Iraq and Syria a Grand active Containment and Roll-Back Strategy with 33 elements, soft and hard factors of peacemaking, is needed, which is still in the making.

Here is an overview of who controls how much territory on the lands that formally make up Syria and Iraq: 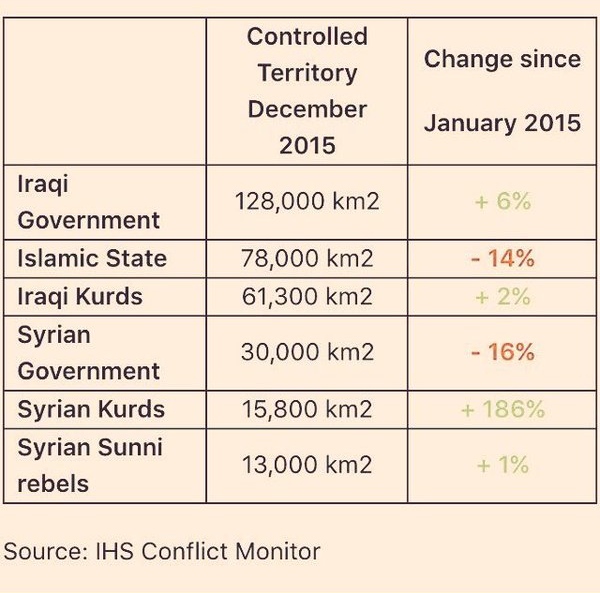