Two senators are standing out from the sea of compliant Republicans. John McCain and Lindsey Graham are the loudest and most vocal critics of the new President Trump. Could this signify a power struggle? Or perhaps they are just two Mavericks.

The word “maverick” harkens back to the Wild West in America and thus has a deep connection with the American soul. The original definition is that of a wild and unbranded calf. Now it has become to mean a rebel, a daredevil, a courageous outsider who stays true to himself and his principles.

John McCain has been adorned this nickname, at 80 years old he has earned himself a reputation. The Republican senator from Arizona was re-elected in November by a big margin. “Democrats, Republicans and John McCain,” the former President George W. Bush once said – McCain’s positions very often differ significantly from the party or president’s official position.

These days, “Maverick McCain” has his crosshairs set on Donald Trump, and the talk in Washington is getting louder. Scarcely a day passes where McCain does not challenge the new president’s direction or ideals. Most recently over the talk of abolition of trade agreements that would leave the government imposing penalties on exports to the United States.

But it is on the topic of torture that the clash between Trump and McCain is most stark. The senator was a prisoner of war in Vietnam, and subject to torture, but in the past Trump had insulted McCain saying, “I prefer people who don’t get caught”.

Since then Trump has mocked McCain on his insistence to comply with the law when it comes to torture. Trump has said recently in interview that he believes torture “absolutely works” INSERT LINK. McCain came out swiftly and said, I do not care what the President of the United States wants. We will not torture.”

Even when it comes to the smaller things, McCain does not simply let things pass. For example, the “tough” call to Australian Prime Minister Malcolm Turnball has left many asking questions as to why Trump would crash heads with one of America’s most important allies. Here McCain immediately intervened and spoke with the Australian Ambassador emphasising that good co-operation between the two countries is essential and must continue. 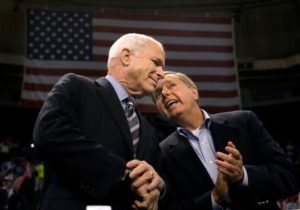 It’s in these moments that McCain looks like a shadow president, waiting to move into the Oval Office and relieve Trump of these duties.

A strong ally of McCain and another perennial thorn in the side of Trump, Graham is a senator from South Carolina. His attacks on trump are occasionally mixed with a strange sense of humour, such as when he warned via Twitter that a trade war with Mexico would lead to more expensive beer and tequila.

Simply put, any policy proposal which drives up costs of Corona, tequila, or margaritas is a big-time bad idea. Mucho Sad. (2)

McCain and Graham have come out in a joint statement to call Trump’s immigration order a “self-inflicted wound in the fight against terrorism”. Of course Trump reacts in the usual thin-skinned manner calling the pair “weak” and saying that they intended to “start WWIII”

…Senators should focus their energies on ISIS, illegal immigration and border security instead of always looking to start World War III.

The pair on Putin

Both senators are also taking on Trump’s fairly strange amorous relationship with Russian President, Vladimir Putin. “I will not be satisfied until Congress and the White House work together to punish Russia for interference in our election,” Graham said.

Graham has long been clear about his distaste for Putin, calling him “a criminal, a dictator, an autocratic ruler who kills his opposition in the streets of Russia.” McCain is in lockstep with Graham on this one too.

Going forward with the rest of the Republicans

It’s not clear whether these daily entanglements between the maverick pair and Trump will cause any real power struggle or help shape the direction of the Republican Party in the future. It might be just mere hopefulness to think that. 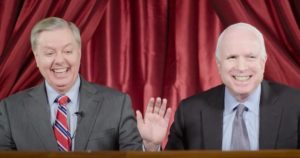 Although the McCain and Graham are no the only Republicans dissatisfied with Trump – Justin Amash, Senators Susan Collins from Maine and Lisa Murkowski from Alaska, recently appealed against decisions by the new president – it seems that many Republicans seem to prefer a much less confrontational approach to the new administration.

Ohio Senator Rob Portman has said that if he doesn’t agree with the President, he will let him know “in a constructive way”. This caution is because although many traditional Republicans do not see eye-to-eye with Trump, they have a lot to thank him for, bringing an unpredictable result to the election and conquering both chambers of Congress in the process.

The juicy meat on the bone that Republicans see of finally being able to implement large-scale conservative projects like comprehensive tax reform and a healthcare overhaul is just too much to risk the image of in-fighting for. The overall agenda is more important to them. This can also be seen in many of the uncontested confirmations of Trump’s cabinet, which surely would have been under more scrutiny in objective minds.

McCain and Graham are part of the old guard, secure in their positions, not afraid of the base that Trump commands, but others are more fearful, afraid to be branded as disloyal for years if they are too rebellious.

They do not want to be “Mavericks”. 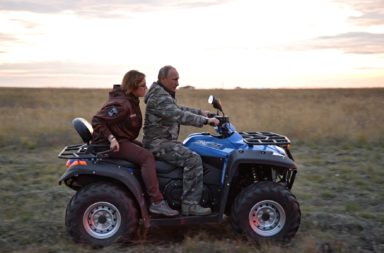 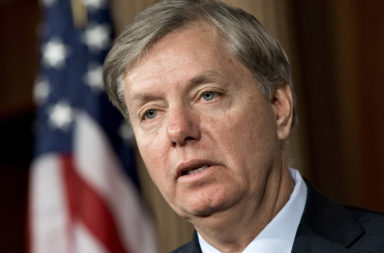 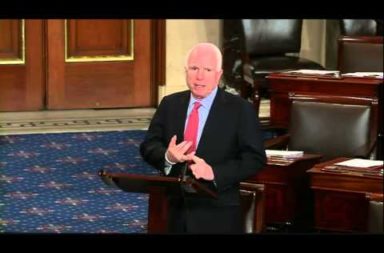 John McCain on Russia in Syria and U.S. Interests