Four elements are propping up the hermit kingdom

Four elements are propping up the hermit kingdom

President Trump has said in recent weeks that he is willing to take on North Korea, with or without the help of China – but he will need help from Beijing if he is to tackle the streams of income that keep the regime afloat.

The US and its allies have attempted to continuously bottleneck the North Korean government’s income and cut it off completely from the global banking system, but that has only led to Pyongyang finding creative ways to dodge the sanctions.

“We’ve been over-prescribing sanctions on the North Korean regime to the point where it has become a superbug,” said John Park, director of the Korea Working Group at the Harvard Kennedy School.

The US needs to persuade China to halt trade with North Korea, with many calling on Washington to punish Chinese companies that are thought to be doing business with North Korea.

This commodity is the biggest source of foreign income with millions of tonnes being sold to China every year, accounting for about a third of official exports in 2015. This was thrown into doubt recently when China said in February that they would halt all coal imports from North Korea for the remainder of 2017.

However, despite the strong rhetoric, experts believe that Chinese claims of clamping down on trade sound tougher than they actually are. Beijing sees North Korea as a buffer between China and South Korea – a key US ally.

“The objective of the coal ban is clearly not to bring down the North Korean regime,” Stephan Haggard, a visiting fellow at the Peterson Institute for International Economics, wrote after it was announced. Rather it is their desire to return to talks.

Trade is still possible due to lax enforcement and off-the-books deals. Coal is not the only North Korean export that the Chinese buy; they also import iron ore, seafood and clothing.

China’s position on North Korea is as follows: 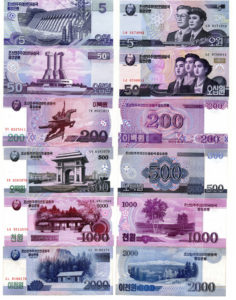 It is widely believed that North Korea has built up a very healthy rainy day fund, coming from the constant coal sales to China, especially when the spike in global commodity prices happened in the previous decade. These funds are used to buy whatever the regime wants for its weapons programs.

The money itself is kept in China, allowing North Korea to easily avoid the sanctions that aim to keep it out of the global financial system. Restricting access to that cash is ultimately in the hands of the Chinese authorities and is dependent on their political will to use domestic law to track the funds down.

Investigations conducted by the US and United Nations concluded that North Korea is using front companies to gain access to global banks. One option is to fine a Chinese bank for helping North Korea avoid sanctions. A large fine would send shock-waves through the Chinese financial system and would ultimately force banks to evaluate their compliance procedures.

Since early 2016, North Korea has also been generating income by hacking banks. They are linked to attacks on financial institutions in 18 countries; according to a new report from Russian cybersecurity firm Kaspersky.

This is a growing area of expertise for North Korea, and a big source of revenue going forward.

In March 2016, a cyber heist of Bangladesh’s central bank made headlines with Kaspersky saying the same hacking operation originating from North Korea was also used in Costa Rica, Poland and Nigeria.

This illicit form of income joins the prohibited trade of weapons and drugs in North Korea’s dark chequebook.

Pyongyang is host to a wealthy elite, but the majority of North Korea citizens are impoverished and suffering under famine. Even though it is one of the most closed economies in the world, the regime is still able to squeeze money out of its own people.

One way of doing this is by sending its citizens abroad as forced foreign workers in places like Russia, China and the Middle East, according to a U.N. report from 2015. They are thought to work in industries such as mining, logging, textiles and construction.

Money is also taken from its citizens by setting up department stores and selling cell phones, along with black market trading within the country and across the border with China.