The terrorist media machine is sputtering

The terrorist media machine is sputtering

Over the years, I identified the pace at which a jihadi group releases content as one of the general indicators of its health. When AQAP and AQIM were in control of territory, they were churning out a lot more content than after they withdrew. Similarly, as Ansar al-Sharia in Libya lost ground in the fight with Haftar’s forces, defections to The Islamic State, and leadership death(s) it became far less active in producing media content. Conversely, when these groups were rising, this would be reflected in more media.

With the rise of The Islamic State’s (IS) hold over more and more territory in Iraq and Syria and its ability to consolidate these gains in late 2014 and early 2015, there was a rise in the amount of media content it released. I noticed this because I had to spend more time each day sifting, saving, and posting IS content to Jihadology. By contrast, in the past month or so, I have noticed that it has taken me less time than I had become accustomed.

It is one thing to feel this in my “gut,” and another to try and prove it. So I measured output in the following three categories:

The data is on three-month rolling basis beginning in January 2015 and ending at the end of November 2015. I chose these measurements because I knew from prior research that 63% of IS’s media output came from pictures and just 20% from video messages. The focus on non-military content makes sense too: IS will conduct military and insurgent attacks whether it is in control of territory or not (possibly even more so if it is hurting). Non-military content may therefore be a better proxy for its wider capabilities and general state. 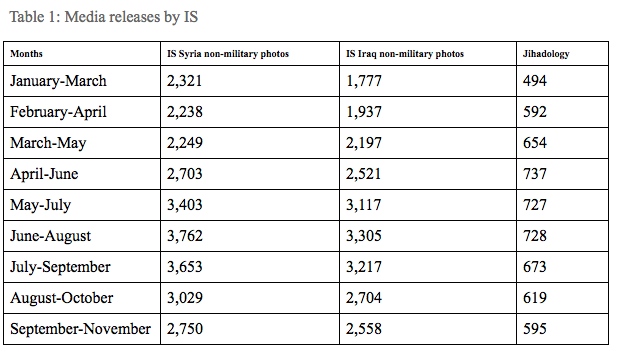 As my data shows, there was a steady rise in photos from January-March period to the June-August period, with a drop off for every three-month category since. It also demonstrates that IS was putting out more content in Syria than Iraq, suggesting the consolidation had been further advanced in Syria.

Similarly, for the posts on Jihadology, there was a rise from the January-March time span until April-June. This should come as no surprise since it takes longer to film, edit, and produce a video than taking pictures.

I believe there may be two reasons for this decline: the killing of IS media operatives, and/or the loss in territory. We know of a number of media operatives that have been killed or seriously injured in airstrikes such as Junaid Hussain, Mohammed Emwazi, Abousamra, and Denis Cuspert (as well as other individuals we likely do not know the names of whether foreign or local). In addition, IS has lost territory in northern Raqqa governorate in Syria and many locations in Iraq, most recent Bayji and Sinjar, with Ramadi potentially teetering as well.

Beyond the quantity of releases, the quality has diminished too. According to Cori E. Dauber, who is a specialist on visual communication, IS’s provincial videos, which are the ones it releases most often have declined, except the ones from Wilayat al-Raqqah where it is headquartered. Releases from al-Hayat continue to be high quality, but are less frequent. Moreover, J.M. Berger told me that he has anecdotally seen IS’s social network become less cohesive in part because of the drop in media, though he cautions there may be other factors at play, too.

Put together, there are signs that IS’s much vaunted media machine has declined over the past half year. It remains very active, of course, but there seems to have been a peak between mid-spring and mid-summer this year. This, I believe, could be indicative of other structural issues IS could be having on the ground. It also suggests that military victories rather than counter messaging has a stronger effect on the media capabilities of jihadi groups.

This article was first published on the ICSR website
@azelin
@ICSRCentre