Dr. Fritz G.A. Kraemer (1908- 2003) discovered and mentored Henry Kissinger and Alexander Haig. The real “Dr. Strangelove” in the Pentagon from the 1950th until 1973. Complete with his trade marks, a monocle and a walking stick. The last Prussian on the Potomac River in Washington DC.

On the picture he gives U.S.President Richard Nixon a lecture in 1973, watched by National Security Advisor Henry Kissinger in the back.

Here is his unique story.

Born in Essen in 1908, Kraemer – an intellectual with two PhD’s – emigrated to the United States in 1938. He scraped a living as a farm worker for five years.

In 1944 he was conscripted and thus became a U.S. citizen. That same year he met the 19-year old soldier Henry Kissinger, who had also emigrated from Germany. Kraemer helped form his thinking and world view and fought with him in the 84th U.S. Infantry Division for the liberation of Europe. Kissinger himself wrote about it in the book True Keeper of the Holy Flame, which was published by Globalo founder and Kraemer protegé Dr. Hubertus Hoffmann in 2012:

“Fritz Kraemer was the greatest single influence of my formative years. An extraordinary man who will be part of my life as long as I draw breath. “ 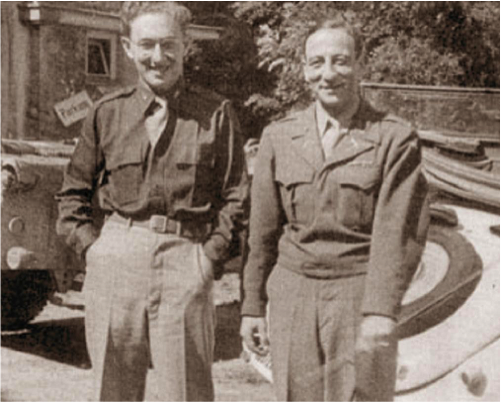 Dr. Fritz Kraemer with his protégé Henry Kissinger as soldiers of the 84th U.S. Infantry Division in Germany, 1945, fighting for the liberation of their former homeland

Fritz Kraemer saw himself as a missionary of freedom and a mentor for unknown young talents who should take over responsibility for their country as the new elite.

He was co-founder of the American school of thought ‘Peace Trough Strength’ (“No provocative weakness, please!” became an often cited dictum) to improve the world and promote the consideration of human psychology in international relations – for foreign policy with a soul.

Kraemer criticized moral relativism and a fearful and weak bourgeoisie that, according to him, did not understand the imminence of the threat from totalitarian radicals. As a student in the Weimar Republic, Kraemer experienced the German Empire and the rise of Adolf Hitler and from 1944 he fought for the liberation of his homeland from totalitarianism with the United States Army.

In the Pentagon he became the “grey eminence” during the Cold War, an authority on Germany and an educator of high-ranking officers and politicians.

In 2003, he passed away and was buried with full military honors at the Arlington National Cemetery. His former pupil Henry Kissinger, with whom he had not spoken since the mid 1970’s, delivered the eulogy.

“For me, Dr. Kraemer’s lifetime of service confirms the importance of the Nation’s elites in pursuing and advancing the value of a free society. I can think of no individual whose patient tutelage made a more meaningful contribution to the shaping of my own worldview.“

U.S. President Richard Nixon whom Kraemer briefed alongside Kissinger in the Oval Office on October 24, 1972:

“I like him and read his stuff – I appreciate to have an intelligent appraisal by someone who really understands great forces at work in the world. It’s been very helpful.”

The futurologist Herman Kahn, founder of the Hudson Institute, writes:

In 2012, the former Chief of Staff of the German Bundeswehr and highest-ranking NATO General Klaus Naumann observed that, “Fritz Kraemer is more up-to-date than ever. People of this caliber are the exception in all ages, but today among our superficial, value-free, “me” generation they ought to be a protected species.”

“We need a responsible elite in our democracies. They must assume key functions in our society. It is not about privilege or wealth, but about special responsibility. We should seek out men and women of excellence, support them permanently as mentors, instruct and encourage them. Too few personalities dedicate themselves to this task. They rather rally celebrities than care for unknown young talents. “

“We are too often prone to mediocrity in our egalitarian democracies, because hardly anyone loves the one who supersedes others. There is a danger that our foreign and security policy will become mediocre and dull. Thus, we must constantly enrich our politics with fresh talents with good ideas and ideals. Many politicians ‘start as a grape and end as a raisin ’. During their long careers they have left part of their soul on every rung of the ladder of success, compromising and sailing with the wind. Great tasks await us in this world, but small interests govern. We must actively change reality and the world for the better instead of passively adapting to a bad reality.”

“Our bourgeois society is idle and coward at heart. It does not recognize the imminence of the few determined radicals, or only do when it is too late. “

“The youth should not get lost in materialism but stay true to themselves. A fulfilled life requires idealism, not materialism. We need true individualism, striving against the stream, courage and self-discipline. “

“Be a person in your own right and do not mindlessly follow the masses as an opportunist. “

You can read more and buy the book by Globalo- Founder Dr Hubertus Hoffmann about his long-time mentor Dr Fritz Kraemer in  www.worldsecuritynetwork.com/fritzkraemer.