His next victims are not women, Mexicans, Muslims or female journalists, but the North Atlantic Treaty Organization (NATO).

NATO is most important and the essence for American foreign and security policy. You may compare it to the Washington Monument for Washington DC or the Statue of Liberty for New York.

It links the United States with Europe as a strong lifeline.

See the GLOBALO report from NATO Headquarters how the alliance has to find its role in 2016.

It protects America as far forward as Europe.

It avoids the mistake after World War I and before World War II, when the Americans withdrew their troops, thus weakening the allies with another war coming soon after.


Without NATO, the United States loses influence in Europe and will be  isolated in the Americas.

It contains aggressive Russia as well, thus is a balance of global power for any US president, but NOT for this ” I-Know-Nothing-But-Everything-Better” candidate.

With his unique mixture of ignorance, arrogance, a deep vacuum of know-how and big-mouth-talk, The Trump axed NATO now too.

At a campaign meeting he told the crowd in Wisconsin that he would be fine if NATO broke up.


When many Russian soldiers “on holiday” are fighting in Ukraine and the Baltic states and Poland feel threatened by a more aggressive Kremlin, Mr Trump wants to break up the European insurance company called NATO, thus deliver the Russian a free victory on a silver plate- how crazy is this man?

He is right to demand an increase in defense spending- like Obama did in Hannover recently too- but to demand that “the U.S. must be prepared to let these countries defend themselves. We have no choice” means a blunt invitation for Mr. Putin to cut the transatlantic cable. It will not push them to spend more, but promote appeasement, which is demanded by populistic national parties all over Europe today. It is “provocative weakness” (Fritz Kraemer). 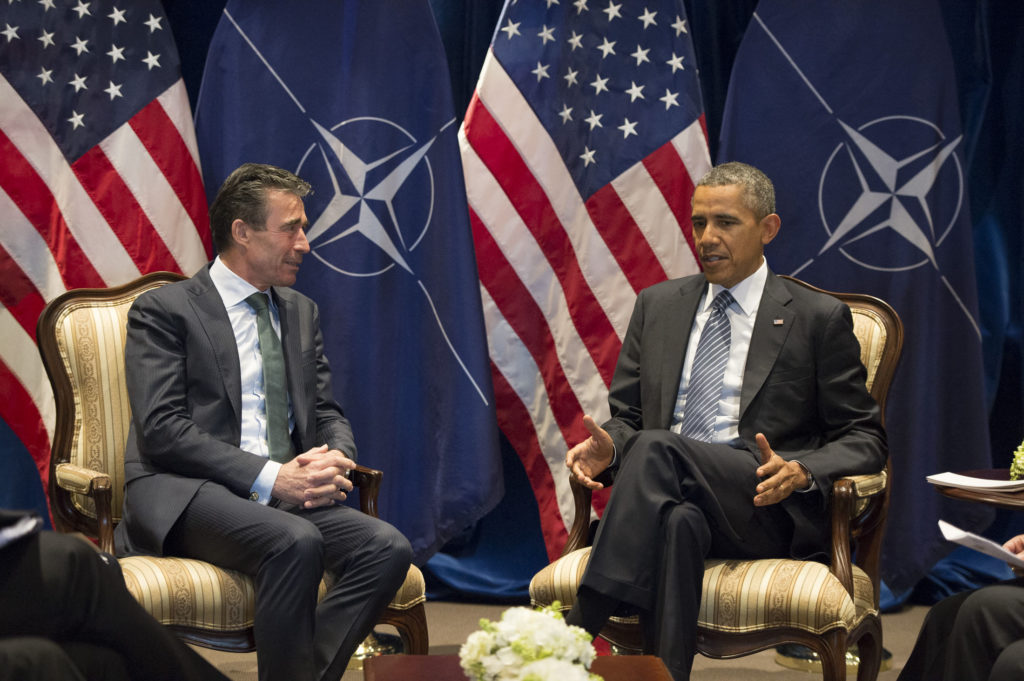 The only candidate who likes Putin by the way and he loves him- now we better understand why Putin is a Trump fan.

Is he promoting Russian or American national interests?

He is not under any pressure to give up NATO, but gets the alliance busted for free.

Again Trump shows: he is a loose canon with the mind-set and irresponsibility of a five-year-old schoolboy.

With his big hands on nuclear weapons after January 2017?

Donald Trump has an argument nevertheless when he criticized that “other NATO countries are not paying their fair share” in comparison with the United States”. Let us look into the details.

Security for the Europeans has still an agreed price tag of two percent of the GDP and is not a gift granted by the Americans. New, fair burden-sharing is a must in a globalized world with greater orientation of the U.S. towards Asia.

In Europe, defense budgets have declined for too long.

On average, defense spending of European Allies was 1.62 percent of the GDP, with 20 out of 28 NATO members spending less than this average and only 6 European countries (Estonia, France, Greece, Poland, Turkey, and the United Kingdom) spending more.”

Is this fair and a mark of solidarity within Europe and the transatlantic region?

Even considering the very expensive nuclear arsenals of the U.S., UK and France, the other nations, especially Germany, with below 1.5 percent, must invest more in the hard factors of crisis-response and peace-making in NATO.

“According to NATO,” the CSIS wrote in a paper, “the 26 European allies (minus Canada and the United States) combined spent $282 billion on defense budgets in 2011 (or about 27.2 percent of the NATO total). While that isn’t an insignificant sum, in comparison, the United States spent $731 billion (70.5 percent). Washington policymakers are now arguing that NATO must quickly move toward a 50/50 rather than a 75/25 alliance.

All member states must commit themselves to spending enough for a modern defense capability within the Alliance of a minimum of 2 percent of gross national product. There can be no free-riders forcing unfair burdens on others. NATO needs fair load-sharing, a necessary foundation of solidarity. If any states spend less and therefore harm solidarity within the common defense system, they will have to pay a solidarity compensation of half of the difference to NATO budgets.

What Trump did not mention and does not know:

Too bad that when he wants to become the US President, he does not know the facts.

His foreign policy is foolish, simple-minded, naive and dangerous for America.

You cannot run the United States of America like a reality-show, a building, or the broken Trump University.