Who is the man who calls himself a "democratic socialist?"

Who is the man who calls himself a "democratic socialist?"

Bernie Sanders is the underdog of the presidential run. First no-one took the Senator of Vermont seriously but since he won eight caucuses  he could be dangerous for Hillary Clinton. Even Clinton is still 700 delegates ahead Sanders has 18 weeks left to win against the former First Lady. But who is the democratic candidate? Here are 10 facts about Bernie Sanders you need to know.

1.Sanders would be the first Jewish President

The democratic presidential candidate Bernard Sanders grew up in Brooklyn in a Jewish district. His father Elias Sanders immigrated at the age of 17 from the South of Poland to the United States in 1921. His mother came from Western Russia to the States. Sanders was the first Jewish who won a U.S. presidential primary.

2. Sanders’ wife Jane is most important for him

Jane O’Meara Sanders is married to him since 1988. According to Greg Guma (75), who was a close friend from Sanders, is she the one who makes him more human. As she tells private stories like he does laundry or he likes to cut firewood. Guam said: “She is the one who let him steam off, and he needs that.”

According to the “New York Times” he raised 96.3 Millions for his campaign. And almost all of it just from the donations under 200 Dollars. Under 100.000 are from Super Pacs or other Pacs. He wants the normal people to donate for him to change America to start a political movement. So the big companies and billionaires can not influence politics anymore.

But also rich people like the ice cream Founders Ben Cohen and Jerry Greenfield do like Sanders opinion. Their newest ice cream is called “Bernies-Yearning.” It’s one percent chocolate on top and the rest is mint and then you have to stir it. Like Sanders wants America to stir the one percent of the rich with the other 99 percent of the poor and middle-class. The entrepreneurs support him cause they do remember him as the mayor of Burlington and that the wouldn’t be as liberal as it is today without him.

Till his forties he had no regular income. Sometimes he worked as carpenter or documentary filmmaker. His family wasn’t wealthy. When his father died he got a little heritage and he bought a piece of land in the north of Vermont. About this he told “The Atlantic”: „It was just fantastic. … I mean, I grew up in a three-and-a-half-room apartment, never owned a damn thing, and owing a piece of land I could walk on was just incredible! This brook is my brook! This tree is my tree!“

Everything he has now is selfmate.

6. From left-radical to the Mayor of Burlington

In the seventies he ran as member of the Union Liberty Party for several political offices but never gained more than six percent. The Union Liberty Party is a radical-left Anti-War-Party which was found by the former congressman William H. Meyer, Peter Diamondstone and others in 1970. When Sanders had no success winning a political office as a member of the party he decided to stood for the elections of the mayor of Burlington completely independent in 1981 and won. This step made him the longest-serving independent politician in the United States. And Burlington became one of the most liberal cities in the U.S..

7. Sanders calls himself a „democratic socialist.“

Before the caucuses no one really believed in him or took his campaign for real. Everyone thought he is a freak. Trump called him a “communist” a “maniac”. Sanders has been left-radical and he has been a socialist. Today he still calls himself a “democratic socialist”, but “I don’t believe the government should take over the grocery store down the street or the means of production.” The young voters do like the political underdog Bernie Sanders. They do understand him and they don’t associate „socialist“ with the cold war like the older generation does.

8. From the political underdog to the Senate

After being a mayor he started his political career in Washington. For 16 years he was a deputy of the congress for the State Vermont. In 2007 he won the election of the US Senate against the republican candidate Richard Tarrant. He became one of the strongest politicians.

9. Sanders changed from radical to liberal

When Bernie Sanders was young he demonstrated against the Vietnam War he joined a left-radical league. He was a typical socialist for some a communist. But today the democratic presidential candidate changed. It started already when he became mayor of Burlington. He stopped a demonstration against General Electric, which fabricated machine-guns for helicopters. 80 people were arrested. A former friend Greg Guma (75) was at the demonstration as well. They had a close friendship planned in Guma’s apartment demonstration against the Vietnam War. But when Sanders was mayor something changed. For him it was more important now to save the jobs at General Electrics then stopping the production of machine guns.

10. Against capitalism but without it will not work

As Senate he has an annual income from 170.000 Dollars. His net worth is assumed 500.000 Dollars and most of it is in investment fonds, which invest in companies. But all of this is under the name of his wife. Cause he as a socialist would not invest in these companies.

So what do you think about Bernie Sanders? 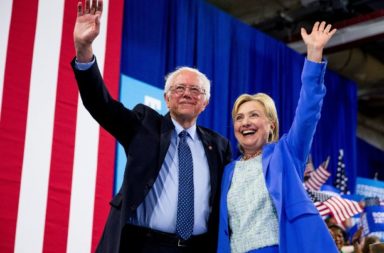