“The business model of Wall Street is fraud”

“The business model of Wall Street is fraud”

She is cosy with Wall Street, including Goldman Sachs.

But the star of the young active people in the Democratic party, Bernie Sanders, is back to his fiery best and calling for heads to roll at Wells Fargo.

“The business model of Wall Street is fraud”, he said again.

Former presidential candidate Bernie Sanders has launched a fresh round of attacks at disgraced bank Wells Fargo in the wake of an $185million settlement with federal regulators last Thursday.

We’re committed to rebuilding trust with our customers and the public. https://t.co/asQjncyzbA

CAPTION: Wells Fargo. Current mood – apologetic. Reacting to CEO John Stumpf’s admission that he and other executives knew about the bank’s illegal account-opening scheme in 2013, the fiery senator is back in the spotlight with a flurry of criticism this week against a “two-tier justice system” that shields top executives from criminal prosecution. As his interviews, tweets and blogs in the last week show, he’s out for blood… “Wall Street won’t change until we make it clear that no bank is too big to fail and no CEO is too big to jail” Blog $200 billion in fines, 0 prosecutions As expected, Sanders saved some choice words for the Wells Fargo executives that oversaw the opening of over 2 million unauthorized and costly accounts for their customers without consent.

How many people at Wells Fargo are going to jail? Zero. But if you smoke marijuana in this country, you get a criminal record.

The outspoken senator followed up a letter to financial regulators by publishing a blog post pointing out that “Wells Fargo’s abuse of its customers is not an aberration” among major banks “that have paid more than $200 billion in fines and settlements since 2008, but not one Wall Street executive was prosecuted.” Citing April’s $1.2 billion settlement for the bank’s “reckless and shoddy” underwriting of home loans from 2001 to 2008, the Vermont senator tore into the incentives-driven culture of the banking industry. “Let’s be clear, the business model of Wall Street is fraud. In my view, there is no better example than the recently-exposed illegal behavior at Wells Fargo.” Sanders will not go quietly The former presidential candidate also used an interview with The Nation to reaffirm his commitment to populist economic and social issues by warning Hillary Clinton that he would not go quietly after November’s election. “The day after the election, when Hillary Clinton wins, you can be assured that I and other progressives will be saying to President-elect Clinton, “Take a good look at the Democratic platform that you supported—because together, President-elect Clinton, we are going to implement that platform. We’re going to involve millions of people in the process who are going to break up the large Wall Street banks, who are going to make public colleges and universities tuition-free, who are going to be very aggressive on climate change and transforming our energy system.” A busy week has reminded everyone that the 75-year old Brooklyn native and Vermont senator remains a force to be reckoned with and is keen to continue the crusade against corruption on Wall Street that has been at the centre of his political platform for years.

Will Hillary #feelthebern? Winner of 13 million votes despite an eventual bitter loss for the presidential nomination, the self-described independent Sanders commands a small army of extremely active and media-savvy followers who could yet remain a serious obstacle in the race for the White House. As is common, many took to social media to add their weight behind Sanders’ condemnation.

TODAY.10AM.The American people vs Wells Fargo CEO John Stumpf. It’s not the first time we’ve met. We doubt it will be the last. #feelthebern pic.twitter.com/xlOTFziY2q

As Sanders looks to utilize his considerable influence and remain a political force for years to come, the crusade against Wall Street shows no signs of fading and many express doubts about Clinton’s record on the issues that matter to the liberal left. It’s not hard to see how Hillary’s reaction to the continued revelations about Wells Fargo and Wall Street in general could prove decisive come November. 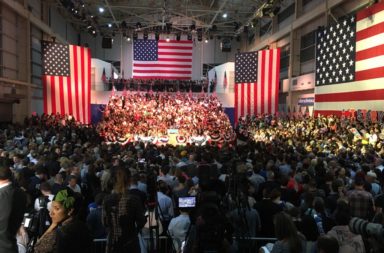