AFTER THE BRUSSELS TERROR

AFTER THE BRUSSELS TERROR

After the devastating attacks in Brussels, many are wondering why this has happened in Brussels.

The Molenbeek area of Brussels was a notorious hotbed of jihadist activity.

But Belgian politicians, procecutors, judges and police handled the threat too relaxed and unprofessional since years.

What we know so far:

Are there more bombs to come?

A twitter user has said “Do not bring victims to Saint Pierre Hospital, there are more bombs in the chamber”. This account has since been suspended. Experts have said that this account is linked to ISIS. 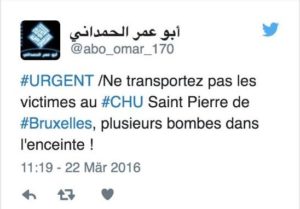 The user also made reference to bombs in Germany, saying that “You will see more bombs and more deaths! Soon in Germany too!” Sergei Markov, an adviser to Vladimir Putin, said in a Facebook post that the next terrorist attack will be in “most likely, alas, Berlin”

Arrests have already been made in France over another suspected plot that was in the advanced planning stages.

As many as 6000 European people have gone to support ISIS, says Professor Peter Neumann of Kings College, and the new wave of attacks is beginning.

President Obama has said from Havana, “we stand in solidarity with them in condemning these outrageous attacks against innocent people”, and that “we can and we will defeat those who threaten the safety and security of people all around the world”.

What does this mean for travelers?

Expect security at airports around the world to be heightened. The US has warned travelers to “be vigilant”.

Our advice is to check-in online if possible, and do not loiter in the airport. Go immediately to the check-in desk and then directly to the security checkpoints.

Photo shows the exploded metro in Brussels where 20 people were killed.Twitter user @alxdm. Modified by Globalo.