The man who tanked Britain's economy

The man who tanked Britain's economy

The world was shocked on Friday when Britain voted to leave the EU, and world markets plummeted on the surprising news.

David Cameron, the Prime Minister of the UK called for the referendum, and has since resigned since the vote did not turn out the way he campaigned.

The “Leave” campaign, which barely scraped by with a win was represented mainly by the former Mayor of London Boris Johnson.

Who is Boris Johnson?

Born in New York City in 1964 (age 52), Boris Johnson was brought up very well educated and began his career as a journalist for The Times in 1989. He worked as a journalist for The Daily Telegraph where he was strongly a euro-skeptic. After that, he became an editor at another institution, and was eventually elected as a Member of Parliament in 2001. As a member of the Conservative party, he was elected as the Mayor of London in 2008 and served until 2016. A major part of Boris’ success was the recovery of London after the financial crisis, as well as seeing London hold a successful Summer Olympics in 2012. Boris was also a strong campaigner to Leave the EU.

Why did he support Leaving the EU?

Boris Johnson has always been a Euroskeptic. He has always believed in the power of Britain, and fought for the sovereignty of the country. He has shown a great distrust for the EU and Brussels, and has expressed concern over the growing influence and regulatory control that the EU holds over Britain. He has been very vocal about his opposition that EU laws override domestic laws on issues like intellectual property and patents, agriculture, and competition policy. “Insisting that the EU is about economics is like saying that the Italian Mafia is interested in olive oil and real estate,” Boris said in a speech at the Leave Headquarters. His arguments focus on the idea that the EU has chanced, and they have become increasingly undemocratic. He brings up that the EU is passing 60% of the laws that pass through England, and this has eroded the independence of the UK.

He attacked the claims of a “reformed EU” saying that in the past three years, nothing has actually changed with the EU. He said that the single market of Europe would spur growth, however he claims that “the rate of growth flattened again – 14.6 per cent lower than the previous 20 years when there was no single market.”

He has also argued against the “Peace-in-Europe” argument (that the EU keeps European countries from going to war with each other) by saying that the EU is not necessary for this, as NATO serves a similar purpose.

Finally, he turned to immigration, the key factor of this entire campaign. With the EU legislating on refugee policy and immigration policy, it completely removes border control from the UK, and this is unacceptable to the Leave campaigners.

What did he say during the campaign?

Boris has been in the news a lot for his outrageous and highly offensive claims, and he has basically been compared to Donald Trump, which when you see his hair, that’s not such a crazy comparison.

Boris has ended up in a lot of hot water over his public claims, most notably when he compared the EU to Hitler in May of this year. He said that the EU has the same goal as Hitler: to create a single superstate. This was branded as extremely offensive given the horrifying and violent methods used by the Nazis, and the EU has never been violent towards its member states.

A month before, Boris was again putting his foot in his mouth when he attacked President Obama in April, bringing up his race when Obama removed a bust of Winston Churchill from the Oval Office. Boris then said that Obama had an “ancestral dislike of the British empire”, alluding to Obama’s part Kenyan heritage. Even the grandson of Churchill spoke out against Boris, saying that the comments from Mr Johnson was “totally wrong on almost everything”.

What is Boris’ future?

The Brexit was a huge moment for Boris. If his side had lost, his political career would be over. he would have made a lot of arguments that did not resonate with the people, and he has said things that were deeply offensive to many. But he didn’t lose. His side won, and that was huge for Boris, especially when the news came out that the current Prime Minister, David Cameron, had chosen to resign. This means that the conservative pro Leave majority will be looking for someone to take the helm for the Brexit to occur, and Boris is definitely poised for this challenge, since he has so passionately pushed for the Brexit. 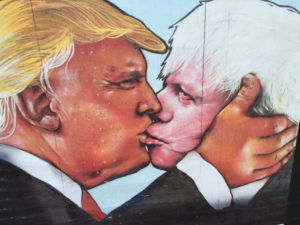 But in his quest to make Britain strong, did he err in judgement? As of now, Scotland has already called for special talks to remain in the EU, and polls already indicate big support for a second Scottish Independence Referendum, which is not out of the question according to the Scottish leader Nicola Sturgeon. So then the question is: is Britain better out of the EU, even if that means that they must go on without Scotland?

Boris is a very dedicated and intelligent man, who is gifted with charisma and humour, and he is adored by many. Nick Clegg, the ex-Deputy Prime Minister, called him “Donald Trump with a thesaurus”. Well, Donald Trump is currently running for President, so is Boris as PM so ridiculous?