“Change has to come from Outside this Broken System"

“Change has to come from Outside this Broken System"

Trump's "Contract with the American Voter"

Trump's "Contract with the American Voter"

If you love him, or you hate him. It is worth reading.

This speech shows as well why still more than 40 percent of Americans support him after endless scandals. They are frustrated, by Old Washington, and admire him as a kind of Political Messiah to safe America and make it great and good again.

It documents Trump as a radical man, a revolutionary, who promises to turn the capital upside down.

His latest speech shows as a president Trump will exit climate change, free global trade  and isolate the US from the world, like no president before had even dared.

His presidency would be the exit of America from globalization and the beginning of an egoistic trade war with China and the rest of the world.

He is a pure isolationist in the old tradition of America in the 19th century. Away from the good old transatlantic and Asian relationships of the last 70 years.

If he wins there will be two major global winners too: good chances for China in Asia and for Russia in Europe to use and fill this American power-vacuum from 2017 to 2020. Retreated America will loose its status as the number one global power.

GLOBALO documents the DONALD J. TRUMP CONTRACT WITH THE AMERICAN VOTER, which the Republican candidate announced in a major speech in Gettysburg , PA,  October 22, 2016, for his first 100 days in office.

“I’m not a politician, and have never wanted to be one. But when I saw the trouble our country was in, I knew I couldn’t stand by and watch any longer. Our country has been so good to me, I love our country, I felt I had to act,” said Mr. Trump in his address.
“Change has to come from outside this broken system. The fact that the Washington establishment has tried so hard to stop our campaign is only more proof that our campaign represents the kind of change that only arrives once in a lifetime,” he continued.
“I am asking the American people to rise above the noise and the clutter of our broken politics, and to embrace that great faith and optimism that has always been the central ingredient in the American character. I am asking you to dream big.
“What follows is my 100-day action plan to Make America Great Again. It is a contract between Donald J. Trump and the American voter – and begins with restoring honesty, accountability and change to Washington,” he concluded. 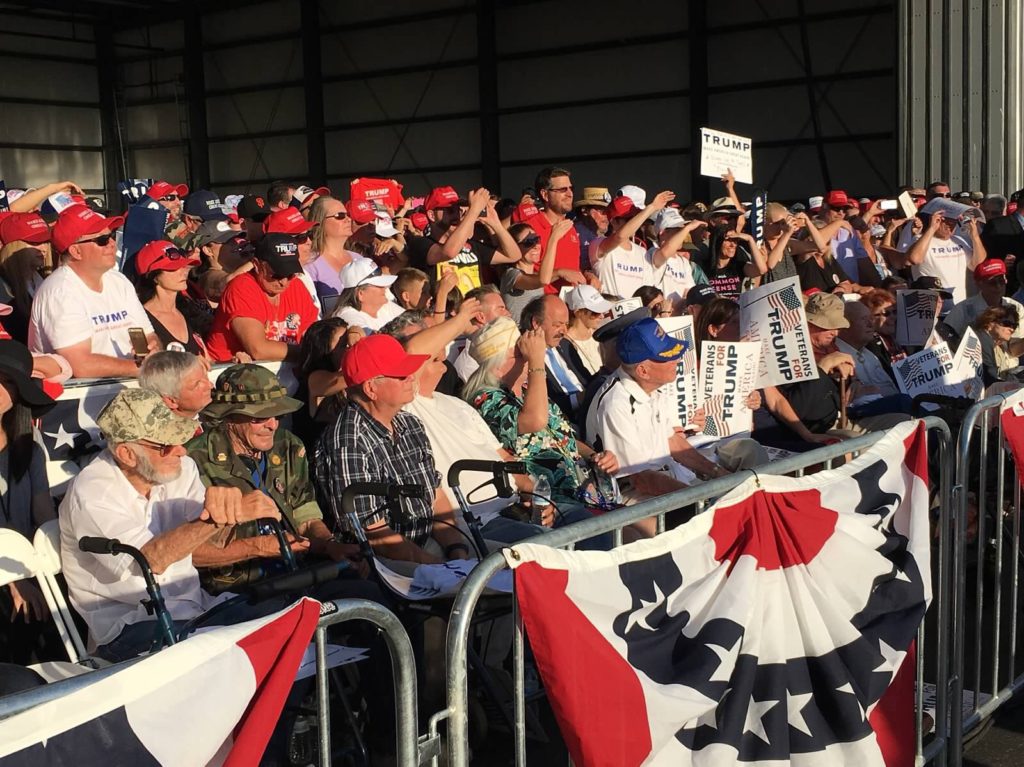 “Therefore, on the first day of my term of office, my administration will immediately pursue the following six measures to clean up the corruption and special interest collusion in Washington, DC:

FIRST, propose a Constitutional Amendment to impose term limits on all members of Congress;
SECOND, a hiring freeze on all federal employees to reduce federal workforce through attrition (exempting military, public safety, and public health);
THIRD, a requirement that for every new federal regulation, two existing regulations must be eliminated;
FOURTH, a 5 year-ban on White House and Congressional officials becoming lobbyists after they leave government service;
FIFTH, a lifetime ban on White House officials lobbying on behalf of a foreign government;
SIXTH, a complete ban on foreign lobbyists raising money for American elections.

On the same day, I will begin taking the following seven actions to protect American workers:

FIRST, I will announce my intention to renegotiate NAFTA or withdraw from the deal under Article 2205
SECOND, I will announce our withdrawal from the Trans-Pacific Partnership
THIRD, I will direct my Secretary of the Treasury to label China a currency manipulator
FOURTH, I will direct the Secretary of Commerce and U.S. Trade Representative to identify all foreign trading abuses that unfairly impact American workers and direct them to use every tool under American and international law to end those abuses immediately
FIFTH, I will lift the restrictions on the production of $50 trillion dollars’ worth of job-producing American energy reserves, including shale, oil, natural gas and clean coal.
SIXTH, lift the Obama-Clinton roadblocks and allow vital energy infrastructure projects, like the Keystone Pipeline, to move forward
SEVENTH, cancel billions in payments to U.N. climate change programs and use the money to fix America’s water and environmental infrastructure

Additionally, on the first day, I will take the following five actions to restore security and the constitutional rule of law:

FIRST, cancel every unconstitutional executive action, memorandum and order issued by President Obama
SECOND, begin the process of selecting a replacement for Justice Scalia from one of the 20 judges on my list, who will uphold and defend the Constitution of the United States
THIRD, cancel all federal funding to Sanctuary Cities
FOURTH, begin removing the more than 2 million criminal illegal immigrants from the country and cancel visas to foreign countries that won’t take them back
FIFTH, suspend immigration from terror-prone regions where vetting cannot safely occur. All vetting of people coming into our country will be considered extreme vetting.

Next, I will work with Congress to introduce the following broader legislative measures and fight for their passage within the first 100 days of my Administration:

1. Middle Class Tax Relief And Simplification Act. An economic plan designed to grow the economy 4% per year and create at least 25 million new jobs through massive tax reduction and simplification, in combination with trade reform, regulatory relief, and lifting the restrictions on American energy. The largest tax reductions are for the middle class. A middle-class family with 2 children will get a 35% tax cut. The current number of brackets will be reduced from 7 to 3, and tax forms will likewise be greatly simplified. The business rate will be lowered from 35 to 15 percent, and the trillions of dollars of American corporate money overseas can now be brought back at a 10 percent rate.

2. End The Offshoring Act Establishes tariffs to discourage companies from laying off their workers in order to relocate in other countries and ship their products back to the U.S. tax-free.

5. Repeal and Replace Obamacare Act. Fully repeals Obamacare and replaces it with Health Savings Accounts, the ability to purchase health insurance across state lines, and lets states manage Medicaid funds. Reforms will also include cutting the red tape at the FDA: there are over 4,000 drugs awaiting approval, and we especially want to speed the approval of life-saving medications.

7. End Illegal Immigration Act Fully-funds the construction of a wall on our southern border with the full understanding that the country Mexico will be reimbursing the United States for the full cost of such wall; establishes a 2-year mandatory minimum federal prison sentence for illegally re-entering the U.S. after a previous deportation, and a 5-year mandatory minimum for illegally re-entering for those with felony convictions, multiple misdemeanor convictions or two or more prior deportations; also reforms visa rules to enhance penalties for overstaying and to ensure open jobs are offered to American workers first.

9. Restoring National Security Act. Rebuilds our military by eliminating the defense sequester and expanding military investment; provides Veterans with the ability to receive public VA treatment or attend the private doctor of their choice; protects our vital infrastructure from cyber-attack; establishes new screening procedures for immigration to ensure those who are admitted to our country support our people and our values

10. Clean up Corruption in Washington Act. Enacts new ethics reforms to Drain the Swamp and reduce the corrupting influence of special interests on our politics.

On November 8th, Americans will be voting for this 100-day plan to restore prosperity to our economy, security to our communities, and honesty to our government.

This is my pledge to you.

And if we follow these steps, we will once more have a government of, by and for the people.”