Accusations of state-sponsored violence, imprisonment and even murder of Chechnya's gay community have lead Ramzan Kadyrov to makes his most shocking comments yet.

Accusations of state-sponsored violence, imprisonment and even murder of Chechnya's gay community have lead Ramzan Kadyrov to makes his most shocking comments yet.

Inflammatory comments from the Head of the Chechen Republic point to more violence and persecution ahead for Russia’s gay community.

Condemnation of Chechen Republic leader Ramzan Kadyrov’s complicit approval of homophobic violence has come from many sources but notable by it’s absence is criticism or even disapproval by Russian authorities.

Further questioned as to whether he believed America was an enemy of his country, Kadyrov stated:

“America is not really a strong enough state for us to regard it as an enemy of Russia. We have a strong government and are a nuclear superpower. Even if they completely destroy our government, our nuclear missiles will launch automatically. We will turn the whole world over to screw it from behind.”

The Russian response was to at once play down the comments while insisting that there is no problem with the revelations of assault and imprisonment.

“As for Kadyrov’s interview, frankly speaking, very often, his words are taken out of context,” Vladimir Putin’s spokesman Dmitry Peskov told reporters, adding that if the comments were taken in the intended context, “nothing out of the ordinary was said there.”

How Dangerous Is It To Be Gay In Chechnya?

Last week Russian investigative newspaper Novaya Gazeta released disturbing articles reporting on the secret prisons in Chechnya where gay men were allegedly held and tortured and publishing the names of 27 detainees it claims were killed by Chechen security forces.

It purported that victims of the crackdown on men who were either homosexual or perceived to be gay were routinely held at a detention center near the city of Grozny.

“Torture is going on with electric shocks, beatings with cables,” a reporter told the BBC, adding that “all the people arrested are homosexual men or perceived as being gay.”

Homophobia is very widespread in the mainly Muslim Chechnya and authoritarian leader Ramzan Kadyrov has been accused of stoking violence with his inflammatory comments.

Fear has been steadily growing, leading Natalia Poplevskaya of the Russian LGBT Network to warn last month that there was “an organised campaign to detain gay men” in Chechnya with impunity given to Kadyrov as a result of his close ties with Vladimir Putin.

Chechen authorities have denied the allegations, with government spokesman Alvi Karimov stating “You can’t detain and repress people who simply don’t exist in the republic.”

A recent report released by Human Rights Watch confirmed that police in Chechnya collected, threatened and attacked gay or bisexual men. The report concluded that Russian federal authorities had a huge role to play in bringing to justice a series of egregious human rights violations by Chechen authorities.

“Men subjected to these gay purges have endured a gruesome ordeal in Chechnya,” said Graeme Reid, director of the lesbian, gay, bisexual and transgender rights program at Human Rights Watch. “The Kremlin has a duty to bring to justice those responsible for the violence and protect all people in Russia, regardless of their sexual orientation.” 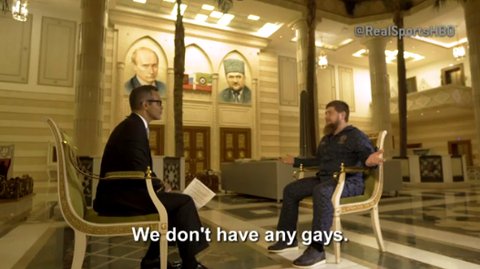 “Take them far away from us. To purify our blood, if there are any here.”

In May, Angela Merkel condemned the evidence of homophobia arising from Russia, often captured on video and uploaded to social media, and made clear that homophobia is a key issue of contention between Russia and Europe.

The German Chancellor called on Russian President Vladimir Putin to help protect gay rights in both Chechnya and Russia amid mounting violence and terror for Russia’s gay and LGBT communities.

Mrs Merkel had raised the issue during her very first visit to Russia in 2015, holding talks with Putin at his summer house in Sochi, and recently echoed her criticism, describing “negative reports on the treatment of homosexuals, particularly in Chechnya” that she had received.

“I asked President Putin to use his influence to guarantee the rights of minorities,” Merkel added in a tense news conference.

Relations between the Germany and Russia have been on the rise since Russia’s annexation of Crimea from Ukraine and further disagreements over Syria.

Gay rights have proven to be a huge source of friction between Russia and both Europe and American and the tacit support that Crimean authorities are expressing for unjustifiable state violence will cause international discomfort and further damage to a tense and suspicious diplomatic atmosphere.