How The People Will Take Zimbabwe Back From Mugabe

How The People Will Take Zimbabwe Back From Mugabe

Globalo Interview With A Former Minister and Senator Sekai Holland

Globalo Interview With A Former Minister and Senator Sekai Holland

Globalo has interviewed the former Minister and Senator Sekai Holland of Zimbabwe, an amazing woman who discussed the economy, human rights, and Zimbabwe’s future with us. She believes ordinary people will peacefully take back the country, and its material wealth, from its ruler Robert Mugabe.

Sekai Holland has never been afraid to speak out.

Q: Zimbabwe has been ruled by Robert Mugabe more or less since 1980. What do you think will happen when “Bobby” dies?

A: I think the obsession with Mugabe is quite amazing. And that is what has given him a long life. The key question is the future of the people of Zimbabwe. What we saw this summer was promising. On [July 6th, 2016] we saw people staying home in massive and non-violent protests. People were not going to work, and banks were closed. The regime elites simply did not know what to do when confronted with this non-violent protest.

Q: Zimbabwe is seeking debt restructuring. This September we may see approval for International Monetary Fund loans of up to US$1 billion that will be given to Zimbabwe…

A: It’s not going to happen. Talk of debt restructuring for Zimbabwe has been ongoing for three years.

Q: So you don’t think this will go through in September?

A: Not unless Zimbabwe is given an economic boost without fulfilling the conditions. I don’t believe that it is going to happen. Even if they get the money, the damage to the society is such that even with a billion dollars and some economic improvement, the people are going to want a change in their government.

Q: Yes, Zimbabwe is having some financial troubles at present. There are fears the Zimbabwe Dollar could be re-introduced. They have tried to introduce the Chinese Yuan toward the end of your time in government, how did the people react to this?

A: With the Chinese yuan issue it was a non-starter. The Chinese did not accept this, and neither did the people of Zimbabwe. This was just an idea of the regime. It is one thing to build some buildings in Zimbabwe it is another to let Zimbabwe use the Yuan. The people are not going to use the Yuan; they will continue to use the dollar because this currency is more likely to be accepted internationally and with neighboring countries.

Q: Yes, the dollars they use though in Zimbabwe are quite old. I have a dollar bill I got in Zimbabwe and the even the American banks won’t take it….

A: Which one do you still have?

Q: It’s a one dollar bill that’s torn. A memento of a bus-ride from Harare across Mozambique to Malawi.

A: (smiling) Yes, the dollars we use in Zimbabwe aren’t just torn they are dirty which is symbolic of the country’s economic isolation.

Q: Elsewhere in Africa, the removal of a long-time dictator has often led to the Civil War. For example, in the Congo, the removal of the Mobutu Sese Seko has led to the world’s bloodiest conflict since World War II that to some extent is still ongoing. Do you think that could happen in Zimbabwe?

A: In Zimbabwe, the people are beginning to unite, and they are tired of the inability of the society to organize itself in opposition to the regime.  Mugabe is an old man. By all standards of traditional African society, he should be an advisor to his family and have stepped down long ago. His continued rule is just an anomaly in the African context.

Q: Right, and this regime is also sheltering some war criminals as well like Mariam Haile Mengistu who killed at least 2 million people while the head of a communist regime in Ethiopia?

A: Yes, Mengistu is an advisor to Mugabe. Mengistu is also an old man now, and he lives in the eastern region but, he has a house in Harrar as well. The regime doesn’t hide the fact that one of the most brutal leaders in African history is living in the country and giving the government strategic advice. It is the same with the Interahamwe, the Hutu extremists who are responsible for the Rwandan Genocide. Some of their leaders are now in Zimbabwe. People guilty for both the Ethiopian and Rwandan Genocides are living in Zimbabwe. The ICC and is looking for these people and the international community is not putting pressure on Zimbabwe to turn them over; it is a baffling situation.

Q: Well this summer, we had the Chilcot report on Tony Blair and the invasion of Iraq. According to Former South African President Thabo Mbeki, Tony Blair planned an invasion of Zimbabwe. Given how things have gone in the last decade, do you think that would have been wise to remove Mugabe by force?

A: Well, it never happened, so it’s impossible to say.

Q: Given the lack of international pressure, how do you think change will be brought to Zimbabwe and in democracy?

A: In a small and humble way, many individuals will play a role in bringing change to the nation. South Africa was one of the most powerful regimes in the world, but small efforts by many removed them.

Q: With a more inclusive form of government, Zimbabwe has the resources to be a wealthy country, doesn’t it?

A:  Zimbabwe is a wealthy country. We have 54 rare metals, there are uranium deposits, and of course diamonds.

Our mineral wealth has been making people rich for a long-time. Unfortunately, those who control the wealth have robbed it from the country.  Look at Cecil Rhodes who came to the country in the 19th century [and named the country Rhodesia]. He made a fortune, which he internationalized much of it, in diamonds. Just now today in the past few years, have people finally taking down his statues and removing his name. Today, we have $15 billion in missing the revenue from diamonds which Mugabe has failed to explain the fate of. I come from the Southwest of the country where diamonds are produced. This is an industry without much transparency. When major diamond discoveries are announced in Northern South Africa, I know that many of those discoveries are being made on the Zimbabwe side of the border but, the people do not see the wealth.  One day we will be able to use this wealth to enrich our country. 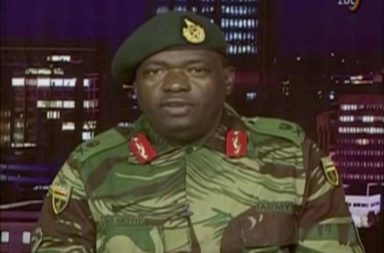 Mugabe Out: Who is in Control of Zimbabwe?