Khamenei sees US as a vicious enemy

Khamenei sees US as a vicious enemy

On Iranian TV on Sunday, the whole world was introduced to Iran’s new missile defense system, a S-300 surface-to-air system supplied by Russia.

This type of missile system is long range and can intercept ballistic missiles to protect large buildings or military bases. The S-300 is one of the most effective and powerful missile defense systems in use today. It is fully automated but can also be operated manually.

You can see a picture of one below: 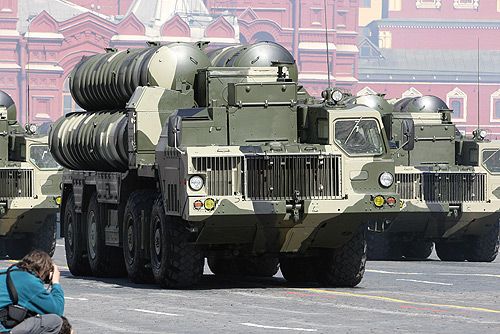 It was deployed to protect their nuclear capabilities, a scary prospect since an international deal was just implemented to curb their nuclear projects. The deal, reached by Iran in 2015 with six major powers, limits their nuclear power projects and in return nuclear sanctions have been lifted.

The site in central Iran south of Tehran that it protects is an underground uranium enrichment facility called Fordow. At the facility in question, enrichment of uranium has been paused since January.

“Our main priority is to protect Iran’s nuclear facilities under any circumstances,” says Brigadier General Farzad Esmaili, the commander of the Islamic Revolutionary Guards Corps.

It is not confirmed whether or not it is operational yet, but Esmaili says “Today, Iran’s sky is one of the most secure in the Middle East.” According to Russian Deputy Prime Minister Dmitry Rogozin, Russia has fulfilled only half of the order so far. It will be completely delivered by the end of this year.

Close encounters last week in the Persian Gulf have led the US to criticize Iran for putting them into a “dangerous, harassing” situation that could have escalated. One such incident you can watch happen in the video below, where four Iranian warships went by US vessels, the USS Nitze and Mason, with their weapons uncovered and manned:

Supreme Leader Ayatollah Ali Khamenei said the missile system is only for defense against US attacks but “the Americans did their utmost to prevent Iran from getting it.” He didn’t specify how.

He continued his aggressively anti-US rhetoric saying that “continued opposition and hype on the S-300 or the Fordo site are examples of the viciousness of the enemy.”

America should be looking out for Iranian aggression in the future.