How Merkel has failed on the migrant crisis

How Merkel has failed on the migrant crisis

The most significant mistake by any German government since WW II

The most significant mistake by any German government since WW II

The most significant mistake by any German government since WW II:

It’s all about timing, and German Chancellor Angela Merkel and her foreign minister Frank-Walter Steinmeier (picture) have missed the opportunity to keep the Syrian refugees within Turkey as they did not provide funding to the Turkish government between 2012 and 2015 – four long lost years.

Only in late 2015 and now 2016 did Germany and other EU member states begin to provide enough funding for them to stay in the refugee camps in Turkey.

They had to leave the camps to Europe to survive.

Globalo documented this journey of a family from Aleppo to Germany in our co-production Watani – My homeland.

Germany ( and the EU) missed the option to leave more than one million Syrian refugees in Turkey.

Merkel has recently had to launch a passionate defence of her stance on migrants since her open door policy began in September 2015. She has since promised her party faithful in a recent speech to reduce the numbers entering the country and has warned that Germany would eventually be ‘overwhelmed’ if this were not the case. Her speech was followed by an eight minute standing ovation.

That’s the number estimated by the U.N. in its largest ever appeal for a standalone crisis. This is the amount needed to help all those affected by the crisis both inside and outside of Syria in 2015, according to their estimates. This is up $2 billion from the year prior. However, both appeals were only 50% funded.

The growth is staggering, and exponential

This makes Syria the world’s largest refugee population under the United Nations’ mandate.

It is the largest exodus since the Rwandan genocide 20 years ago. 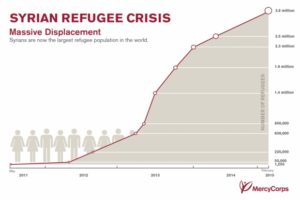 Their infographic highlights the problem.

WFP has three main goals under its Syria response: