This is not an old USSR-aged James Bond or action movie. This is real “Back to the USSR!”.

Putin soon will put new atomic missiles on special military trains- like in old times of the communist empire.

Trains with nukes were used as part of the atomic forces. Russia’s “Ghost”-train returns.
Until the beginning of the 2000s, Russia’s military used these mysterious nuke trains.

Now the project is revived with new missiles like other modernization programs.

The development of the new Barguzin-type missile-carrying nuke train is underway, to be deployed in 2019/2020.

This military train is designed to carry missiles and remains in constant motion traveling around the Russian hinterland and aiming at strategic targets in the West.

Russia is keen to flex its muscles and gain international and national “respect”, some call it fear.

Military manoeuvres, troop transfers to the Western Front and fighters in Syria – all signs which experts say are the hallmarks of a “Cold War 2.0”. 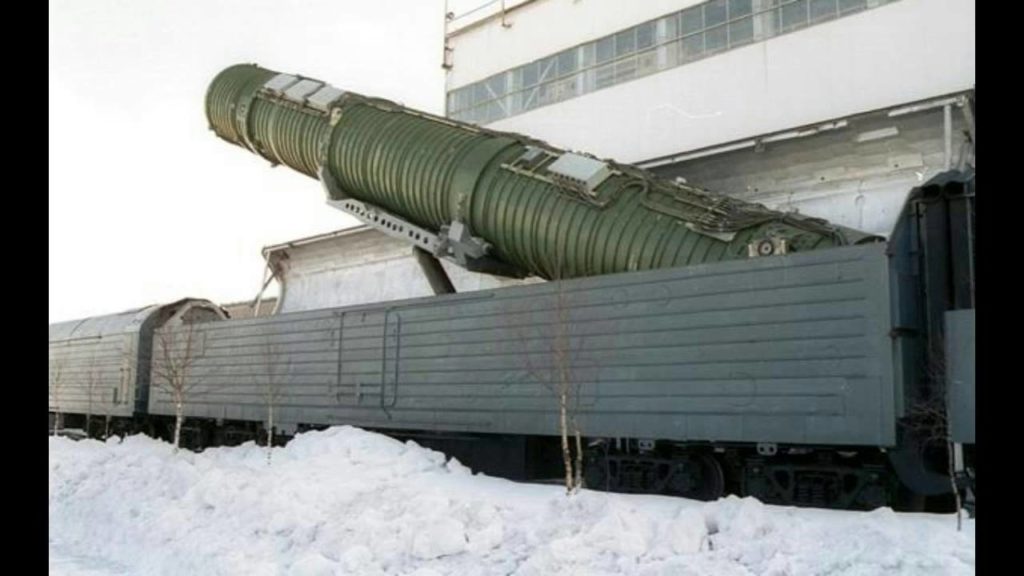 It can travel 1500 miles a day and thus remains (maybe) difficult to detect.

Will this new nuke train change anything, is it more dangerous? Enhance “respect” for Mr Putin and his military?

This is Ice-Age in NATO-Russia Relations

Since the NATO summit in Warsaw in July 2016, the imaginary divide between Russia and the West has been widening. The Russian annexation of the Crimean Peninsula in 2014 is fuelling fears in Eastern Europe.

In Warsaw, NATO decided to deploy 1000 troops in the Baltic ex-Soviet republics of Estonia, Latvia, Lithuania and Poland. Germany is also leading battalion.

For Moscow, this rearmament of Eastern Europe by the West crosses the line. “NATO is an aggressive block”, says Kremlin speaker Dmitry Peskov. In Russia’s military doctrine of 2014, the alliance is classed as an opponent. Thousands of soldiers have moved to Moscow as a reaction to protect Russia’s west flank. In May, the government had announced the creation of three new divisions with 10,000 men each.

Observers are sceptical about what is going to happen. Since the number of soldiers in 2016 has hardly changed – still about one million – the movement of more troops from Central Asia is likely to be postponed. Russia’s 2017 military budget is still going strong at nearly $50 billion, but has shrunk by a quarter compared to 2016.

Like a bastion, the port of Baltijsk is fortified in the Baltic Sea area Kaliningrad (formerly Königsberg). Here, strictly guarded by the public, lies the bulk of the Baltic fleet of Russia. The enclave of Kaliningrad is securely surrounded by NATO countries Poland and Lithuania. Only recently, the army moved battalion battleships here to protect the coast. Rumors about the deployment of air defense missiles had previously fueled fear in the West.

Russia is also expanding its presence in Crimea and Syria. With air defense missiles (type S-400), Moscow has a security dome of several hundred kilometers across these areas and thus makes it hard to reach for foreign jets.

For more than a year, Russia has been fighting in Syria, more than initially expected. The war is also a shop window for the armaments industry. According to expert Dmitri Trenin, the most important effect is the perceived growing respect: “Russia behaves as such in the Middle East, to make it clear to the Americans that it is not a regional power, but a world power.”

Dangerous encounters of fighters over the Baltic Sea.

The Kremlin has long been fond of building bases in Syria like they did in the Cold War in Vietnam and Cuba – in the South China Sea and the Atlantic. Official talks have not yet been held.

“The West is superior to Russia in all areas except nuclear,” says Trenin from the Moscow Carnegie Center. “In such a situation, the weaker is ready to take risks.” This would result in the dangerous encounters of Russian and Western fighters above the Baltic Sea, which have been occurring for months. If a mishap occurs here, a catastrophe could develop.

If we compare today’s situation with the Cold War, we are around the beginning of the 1950s. These events could have destroyed the earth, in the event of an atomic war. Therefore, the world today needs more than ever the teaching of history. “This teaching is called peaceful coexistence.”