When Putin looks in the mirror, what does he see? Not an aggressor as so many are depicting him in the West, but rather a defender of a wounded and misunderstood nation.

When Putin looks in the mirror, what does he see? Not an aggressor as so many are depicting him in the West, but rather a defender of a wounded and misunderstood nation.

After U.S. President Donald Trump’s unprecedented performance at a press conference with Vladimir Putin at the Helsinki Summit on July 16, Trump was criticized across the political spectrum for apparently siding with Putin rather than the U.S. intelligence community about Russian interference in the 2016 election.

According to some Russian observers, Putin relishes his international image as “a Bond villain.” But as Joss Whedon, the creator of the cult classic TV show Buffy the Vampire Slayer once remarked, “Bad guys don’t think that they’re bad guys, bad guys think that they’re heroes.”

This wisdom applies equally to Putin: He doesn’t think he’s the bad guy, he thinks he’s the hero. He’s not the supervillain Blofeld from the James Bond series, he’s Bond.

Widely depicted in the United States as a hostile leader who aggressively challenges American interests around the world, Putin, not surprisingly, sees things quite differently. From Putin’s point of view, Russia is playing defense.

The key to understanding what Vladimir Putin is up to is to understand his ideas, habits and emotions. Current poor relations between Russia and the West are due to a fundamental mismatch in outlooks between Putin and his close associates and most Western leaders. These starkly different mentalities, more than conflicting interests – although these exist as well – are the main source of today’s difficulties and the main barrier to better relations.

The central notion in the Putinist mentality is that Russia must be a strong state and a great power. Feelings of resentment toward the West in general and the U.S. in particular, and vulnerability in the aftermath of the 1991 Soviet collapse, help fuel this drive to restore Russian power. Putin wants to upend what he sees as an unfair, American-dominated international order that exploited Russian weakness. He feels like he is ignored at best, and actively conspired against at worst.

Putin has made these views clear on many occasions. Addressing parliament back in 2003, he stated, “A country like Russia can live and develop in its existing borders only if it is a great power. In all periods when the country was weak – politically or economically – Russia always and inevitably faced the threat of collapse.”

This fear of disorder and collapse was evident in his reaction to the horrific 2004 Beslan terrorist attack, when a school in southern Russia was seized and 334 people died, more than half of them children. Putin said the attack happened because Russia “appeared weak. And the weak are beaten.”

More pointedly, Putin asserted, “They want to cut from us a tasty piece of pie, others are helping them.” The “they” he was referring to were terrorists, and the “others helping them,” he left no doubt, was the United States.

Putin’s famous 2007 Munich speech laid out this worldview at great length. He complained about a U.S. effort to build a world with “one center of power, one center of force, one center of decision-making. A world of one boss, of one sovereign.”

In 2014, Western sanctions were imposed after Russia annexed Crimea and provided political, economic and military support for separatist rebels in southeast Ukraine. Putin angrily declared, “They will always try to put [our bear] in chains. And as soon as they chain him, they will rip out his teeth and claws… We are defending our independence, our sovereignty, and our right to exist.”

The mentality of Team Putin is captured by the image of Russia as a threatened bear or besieged fortress.

Seventy years ago, U.S. diplomat George Kennan’s famous 1947 essay described how to stop the expansion of Soviet power. It was called “containment.” Kennan recommended that the U.S. “confront the Russians with unalterable counter-force” to limit Soviet attempts to spread its influence and power across the globe.

Now, containment as a strategy for dealing with Putin’s Russia is back in vogue. But it’s hard to practice containment against a state that thinks it is containing you.

Containment was designed for the Soviet Union, a revolutionary totalitarian regime with a utopian and transformative ideology. Putin’s Russia is conservative, not revolutionary. In fact, Putin hates revolutions, whether in Eastern Europe or the Middle East, and seems to be afraid of them. For Putin, revolutions are not spontaneous domestic uprisings brought on by popular dissatisfaction, but events that are instigated by someone, often outsiders.

Putin’s Russia is also authoritarian, not totalitarian. As the political scientist Juan Linz argued in 1975, authoritarian regimes are not ideological so much as guided by a certain mentality, a “way of thinking and feeling, more emotional than rational.”

This Putinist mentality, with its conviction that Russia must be a great power, its suspicion of U.S. intentions and its feelings of resentment, lost status and vulnerability, drive a foreign policy that many in the West see as confrontational and aggressive.

Russia’s rulers, in contrast, view it as prudent, defensive and a necessary response to Western pressure and hostility.

“It’s an emotional story of Russia not being treated like a superpower,” one Russian journalist observed. “For many of them, it’s a personal story.” In his March 2014 speech announcing the formal annexation of Crimea, Putin bitterly complained, “They deceived us time after time, took decisions behind our back, presented us with fait accomplis.”

Dealing with today’s Russia will require a more nuanced response than containment – one that combines containment, engagement and reassurance.

Understanding Putin’s mentality doesn’t mean that Russian actions such as military intervention in Ukraine or electoral interference in the U.S. can be overlooked or excused.

What it does mean is that given these diametrically opposing storylines about heroes and bad guys, this relationship will need to be well managed. Deals can still be made in key areas such as arms control. However, a sustained improvement in U.S.-Russian relations is likely out of reach for the foreseeable future.

Finally, there is one huge wild card: Trump, based on his performances in Brussels and Helsinki this month, seems unsure about who he believes are the U.S.‘s primary foes. He seems more concerned about his perceived domestic enemies than Russia’s international behavior.

If Trump continues to try to flip the script in U.S.-Russian relations, upending the dominant narrative about heroes and bad guys, he certainly will face pushback from both U.S. allies and most U.S. politicians, including some of his own national security team and members of his own party. 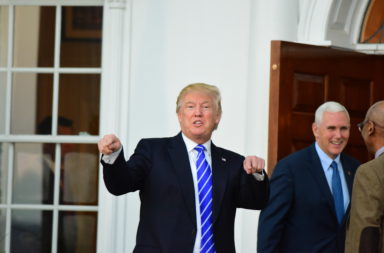 Has President Trump Violated His Oath of Office?