Remember? When the ill-fated jet Malaysian Airways MH 17 flight went down in July 2014, all 283 passengers and 15 crew members on-board were killed. It happened high in the air above the Donbass region in the eastern part of Ukraine.

People around the world were shocked, and reached out in solidarity to the family members of the victims. What was even more startling though, was the emergence of the truth behind this fatal crash. This Malaysia Airlines flight did not have any technical fault, nor was it hijacked. In fact, it was mistakenly shot down allegedly by pro-Russian insurgents with a Russian BUK-anti-aircraft missile  which exploded in front of the nose (picture below).

U.S. intelligence officials later furnished crucial data, which seemed to suggest that Moscow supported the training of insurgents in Ukraine, who eventually were responsible for this crash. However, the Russian government denied any such association and claimed that the Ukrainian government was to blame.

Who was behind the shooting down of the MH17?

The family members of some of the MH17 crash victims are already certain of who the culprit is. According to reports, families of eighteen victims have sued Ukrainian rebel commander Igor Ivanovich Strelkov in an American court, as they are convinced the flight was shot by forces under his command. They are claiming damages amounting to about 900 million US dollars, under the Torture Victim Protection Act of 1991.

According to a report, Strelkov was also worked for Russia’s GRU military intelligence service, even as he led the violence in Ukraine. Created by the Russian Federation and the Soviet Union, BUK missiles can fly at thrice the speed of sound, and can also attack targets above 70,000 feet. Ukrainian intelligence operatives have collected photographs which show that three Buk-M1 systems were transported out of eastern Ukraine, merely hours after the MH17 crash. Apparently, one of these systems was missing one missile – which could possibly be the only that brought MH17 down. 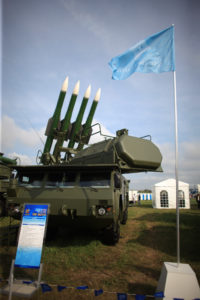 Speculations about Igor Strelkov’s involvement in the crash were rife when a Dutch newspaper De Telegraaf claimed he was a ‘murderer,’ which underscored the possibility that he was behind the MH17 disaster.

These claims have potentially arisen from the theory which claimed that Strelkov had shared on the social media service VKontakte about shooting down a Ukrainian military transport plane around the same time that the MH17 was reportedly shot. It appears as if Strelkov mistook the identity of the passenger flight. Though Strelkov took off this social media post immediately after, this sparked off debate whether Strelkov was indeed the mastermind behind the shooting. Following this, Strelkov organised a press conference on 28th July 2014, refuting any role in taking MH17 down, and instead declaring that his militants were mainly targeting only “black-skinned” mercenaries. Strangely, Strelkov was then dismissed as the defence minister of the Donetsk People’s Republic. Apparently, this dismissal was requested by Strelkov himself.

Are these claims true?

However, it is important to understand that Strelkov himself does not post on these sites. According to a claim that was circulated in the days following the crash, Strelkov had only posted messages on an internet forum dedicated to the antique trade – since April 2014. Writing under the username “Kotych” which means “Cat,” Strelkov has posted on the forum http://forum-antikvariat.ru.

The posts which then appear on Strelkov’s behalf on sites such as VKontakte, Facebook and Livejournal are indeed shared and maintained by Strelkov’s fan following, Ukrainian activists- or simply pranksters. This makes is very difficult to judge if a particular post of these sites is indeed what Strelkov has said, or simply a morphed version recreated and shared by others.

If this is the case, the question remains, why is it believed that Strelkov could be the possible culprit? To understand this more clearly, let us have a look at Strelkov’s political and military associations through history.

Just a few months before the MH17 crash, Igor Strelkov was being accused of a serious charge. On 15th April 2014, the Security Service of Ukraine launched a criminal proceeding against him- accusing him of being a Russian recruiter and a leader of armed “saboteurs.” It was also alleged that Strelkov was the main organiser of the terror in the Sloviansk Raion region of Ukraine. It was claimed that he previously aided the Russian military to capture Ukrainian units in Crimea, during the Crimea crisis in March 2014. In Crimea, Strelkov was actively involved in the arbitration regarding the defection of Ukrainian Navy commander Denis Berezovsky.

Strelkov and the Ukrainian crisis

When the Ukrainian crisis erupted, it breathed new life into the otherwise dull media attention given to Russian politics. Russia’s role in this crisis was represented by the face of Igor Strelkov, with a study by Russian journalist  Andrei Arkhangelsky  revealing an interesting finding. According to the study of Russian talk radio stations, Strelkov’s name was mentioned much more often than Putin’s. This underlines the general sentiment towards Strelkov at that time – he inadvertently emerged as the Russian lead hero of the drama that played out as the Ukrainian crisis continued. Putin was benefiting by Strelkov’s aggressiveness, as he helped to make parts of Ukrainian territory volatile – which Putin could use to argue the claim that Kiev was out of control and the Ukraine revolution had reached a dead end – thus unseating the power of the new Ukrainian authorities. However, things were derailed for Strelkov after the MH17 crash, since he was now being suspected of international terrorism –much to Putin’s embarrassment.

It is no wonder then, that the bereaved family members of the MH17 crash victims firmly believe – that if it has been anyone who commanded the shooting down of the plane in Ukrainian territory; it has to be Igor Strelkov.