'The man-made islands not Chinese territory'

'The man-made islands not Chinese territory'

As China has grown unexpectedly quickly, it comes as no surprise that they want to assert their dominance in the region. But have they gone too far? An International Tribunal thinks so, ruling against them in the South China Sea.

The rise of China is unprecedented in this world. Just 20 years ago, most of China was impoverished and was made up of small villages and towns. Now, those small fishing villages have become sprawling metropolises and the former fishermen are hopping into their Ferrari’s to go shopping at Louis Vuitton. Times have certainly changed.

With this incredible economic growth has come the growth of China as a world power and global leader. The world sphere was previously dominated by the United States and Russia, but China has quickly eclipsed Russia to become the world’s number two superpower. With that power comes responsibility (Thanks Uncle Ben), and China has not proven to follow this accepted mantra. They do not offer to help other countries in a military standpoint, and they fail to lead the world in tackling international evils like ISIS. The world still looks to the United States and NATO for these sorts of actions. China has been using its tremendous military might to bully and vie for control of the South China Sea.

What is the South China Sea?

The South China Sea is a sea that is located between Southern China, Vietnam and the Philippines. It has been the historic fishing grounds for fishermen from all countries in the region, and China is claiming the majority of the sea as their own.

Why is There Controversy? 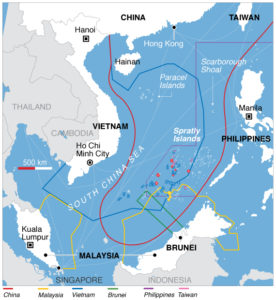 International law says that the territorial waters of a country extend 12 nautical miles from the coast of a country. Exclusive economic waters extend 200 miles from the coast. These rules were set up by the United Nations Convention on the Law of the Sea (UNCLOS) in 1982. This leaves a significant amount of the South China Sea as international waters and a non exclusive economic zone. Given how small the sea is, and how many nations are vying for control of it, China feels that it is prudent to claim it all now. China has even gone so far as to build islands in the South China Sea, setting up a military base on it, and declaring it territory of China, therefore extending a 200 mile circle around it as their territory. This was their tactic around the rules, and they have claimed other islands as their own as well, which has often resulted in conflict. Both the Spratly Islands and the Paracel Islands were spots of armed conflict between China and Vietnam.

What Did the International Tribunal Say?

The International tribunal, which China has said it ‘does not recognize’, ruled against China in its territorial claims. It said:

What Does it Mean?

This also sets an interesting precedent, as it does not recognize man made islands in international waters to have their own exclusive economic waters. So if a country chooses to build man-made islands that host a population in international waters, the will not have exclusive rights to the waters around that island. This is interesting, because China could now challenge the ruling by building a bigger  island in international waters outside of the exclusive economic zones of the neighboring countries, and leave a permanent and sustainable population on it. This would then challenge the ruling of the courts, and could possibly result in territorial expansion via island construction. This would be an enormous waste of money, but they did already build one island for this purpose, so what is to say they don’t build another?

What Will Change in the Future?

Honestly, since China has already rejected the ruling, and the court has absolutely no enforcement mechanism, nothing will happen. China will continue to dominate the South China Sea while the other countries fight for their territorial waters. The international community will complain, but as a permanent member of the Security Council, as well as being an integral part of the global supply chain, China is too important to cut off or sanction, and they are too strong to be pressured by the international community.