Watch in this GLOBALO video what happens when Donald Trump as U.S. President would push the button.

The GOP nominee now asked : “Why not use them?”

For him the world is like a soap, a trash war movie, Trump’s Gotham-city, to act as U.S. president Rambo-style.

The only man who can decide whether to use the thousands of American nukes would be Donald Trump, when elected in November. One reason why every American patriot must avoid to have this New York Dr Strangelove in the White House. 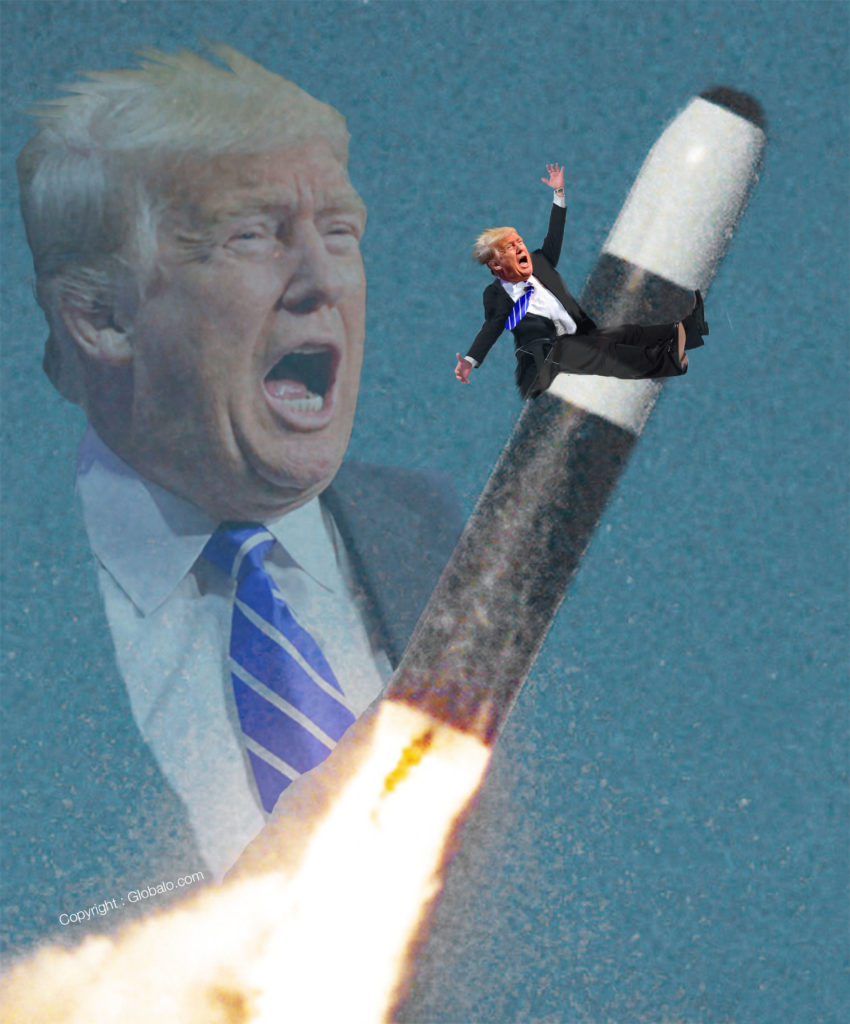 President Obama denounced Republican presidential candidate Donald Trump days ago, calling him “unfit to serve.” He noted Trump’s lack of knowledge about global affairs, his temperament, and his constant inappropriate comments as reasons for being an unsuitable candidate for president. He also urged Republicans with withdraw their endorsements of Trump.

Since those comments by Obama, a new cause for concern has arisen. It has come to light that Trump made statements implying he might be willing to use nuclear weapons.

Morning Joe host Joe Scarborough revealed that, according to an anonymous foreign policy advisor, Trump had reportedly asked three times during a briefing: “If we have them, why can’t we use them?”

Trump’s campaign denies these statements, but that doesn’t mean using nuclear weapons isn’t something he would consider. In March, Trump said in an interview, “Somebody hits us within ISIS, you wouldn’t fight back with a nuke?”

Trump’s statements signal to nations like Russia and China that the US under Trump would be willing to use nuclear weapons to solve tactical issues, like dropping a nuke on ISIS, which would destabilize a carefully crafted balance and lead to a major expansion in nuclear proliferation.

John Noonan, a security expert who used to advise Jeb Bush and Mitt Romney, believes Trump’s statements on nuclear weapons are dangerous for this reason. He took to Twitter to explain that other countries with bad intentions are restrained only by our ability to use nuclear weapons, but that the point of nuclear weapons is that they are never used. This is the key to deterrence theory.

Under Trump, the world would be a much more dangerous place. Incidents like Hiroshima, where 80,000 died instantly and 100,000 died of the effects later, would be more likely to occur again.

7. The nuke triad, which Trump doesn’t have a clue about, has been the single greatest contributor to global peace for decades. You heard me

9. Because Trump would be undoing 6 decades of proven deterrence theory. The purpose of nukes is that they are never used. Trump disagrees?

Trump is no stranger to contradiction though. Despite those other comments, has also said he is against nuclear proliferation, but that “it’s going to happen, anyway.” He also has said he believes nuclear weapons are “the biggest problem the world has.”

Earlier in the campaign, he encouraged Japan and South Korea to have nuclear weapons to protect themselves from North Korea’s in-development weapons program, as a deterrent. His statements were: “At some point we have to say, you know what, we’re better off if Japan protects itself against this maniac in North Korea,” and “We’re better off, frankly, if South Korea is going to start to protect itself.”

There are currently nine countries with nuclear weapons: the United States, Russia, the United Kingdom, France, China, India, Pakistan, Israel and North Korea. Altogether, there are approximately 15,395 nuclear warheads among these countries, down from 15,850 in early 2015. Read more about the current nuclear trends in our previous article here.