THE TRUTH ABOUT THE EU-TURKEY DEAL

THE TRUTH ABOUT THE EU-TURKEY DEAL

Europe faced crisis, and sold their soul to make it stop.

Europe faced crisis, and sold their soul to make it stop.

The EU promised Turkish President Recep Tayyip Erdogan a whopping $6.7 billion as well as political allowances if his government would take back refugees who reach Greece through Turkey.

It has been viewed with skepticism from the start, but now, the Brussels-Ankara refugee deal is in risk of downfall.

Refugees are getting locked up in Turkey and it seems like the better educated Syrians are barred to carry on to Europe.  In a letter to the European Commission, one of the commitments made by Ankara was to provide short-term protection to Syrians returning. 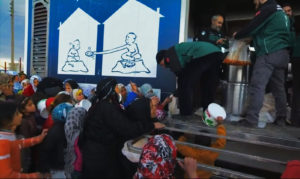 German Chancellor Angela Merkel praises the deal with Turkey as a kind alternative to shutting Europe’s internal borders. The first Syrians, who were brought into Turkey from Greece, were part of a new agreement and were taken straight to a detention center. This fact remains not only in violation of international refugee law, but also serves as an insult to Merkel.

The story of Ayasha Nour is horrible and makes you wonder what is actually going on. She never wanted to experience being locked up without understanding what exactly was happening to her. She was a French teacher from Damascus, but she had to spend twenty days in Moria in a refugee camp on the Greek island of Lesbos. She had to sleep on the floor in a congested tent with it being cold and not having enough to eat. She kept asking the Greek officials for when a decision would be through regarding her asylum application, but they never answered. “Sometimes they would say a week, sometimes a month and sometimes a year,” said Nour.

In April, by the time the month came to an end, the Syrian gave up all hope of ever reaching north of Europe, so she returned to Turkey. The European Union’s border protection agency took her along with eleven other Syrian refugees on a flight from the island of Lesbos to south –east Turkey. She said that before she left Lesbos, the officials had assured that she could apply for refuge in Turkey and would be granted to move freely there. But soon after landing in Turkey, she and the other returning refugees were taken away like they were criminals. She has been in a detention camp in a city on the Turkish-Syrian border called Düziçi, for weeks now. “It’s like Moria, only worse,” she told. She uses an alias in fear of reprisals from the Turkish guards. The imprisonment of Syrian refugees rears doubts over the debated refugee agreement between Europe and Turkey. It definitely gives off an idea of the deal being on the verge of falling apart, only two months after the commencement of the program.

Many refugees in Düziçi did not make it to Greece. Some were randomly arrested in Turkey; while others were incarcerated for begging on the streets, according the reports of the Turkish human rights organization Mülteci-Der. “Nour” was trying to make it to London to reunite with her husband. She is pregnant, and still not permitted to leave the camp to see a doctor. “I don’t know what will happen next or when I will finally be released,” she said dejectedly.

The center is off-limits to media, NGO’s and counselors. A member of the European Parliament from Germany’s Left Party, Cornelia Ernst visited the facility in May and called the conditions there were shocking and that the detainees are permitted to leave their cells for only few minutes every day.

It is becoming ever more challenging to maintain the prerogative that Turkey is a safe place for refugees. In early May, Human Rights Watch documented cases of five Syrian refugees who were shot dead while trying to enter Turkey, supposedly by Turkish border groups. The EU has sent 390 refugees from Greece back to Turkey since early April. Approximately 8,000 migrants remain in the Aegean islands. The European Commission believes that Greek appellate judges may stop ‘one in three’ deportations of Syrians. “This strikes at the core of the deal,” said an official form Brussels. 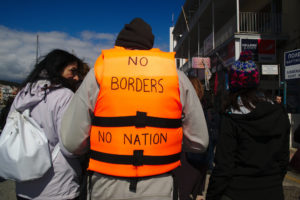 The European Union is clinging to the deal even though the climate is tense between Brussels and Ankara. Erdogan threatened to cancel the agreement completely if EU refuses to grant Turkish citizens visa-free travel. But Europe countered that Ankara needs to change the Turkish anti-terrorism law first.

“During my time as prime minister it was announced [this] would come in October 2016. I don’t understand why bringing it forward four months is presented as a win. I’m saddened by the presentation of small things in a bigger light,” Erdogan said last week. The ambiguity in Turkey has come at a very bad time in Syria. The negotiating period has crumbled and peace talks are at a dead end. Staffan de Mistura, the UN’s Syria envoy, warned that a lasting finale to fighting in Aleppo, where a 48-hour truce has been settled on was vital. “The alternative is truly quite catastrophic. We could see 400,000 people moving towards the Turkish border,” he said.

The sudden change of power in Turkey will leave an impact on the country’s relations with Europe and the fate of the refugee deal. The rising struggle for power between Turkey’s Prime Minister Ahmet Davutoglu and President Recep Tayyip Erdogan reached its inescapable end on last month, when Erdogan forced Davutoglu to resign. The ruling AK Party held an extraordinary convention on May 22 to elect its new leader.  The penalties will not only alter Ankara’s relations with Europe but also for many European countries. They will be faced with the growing number of illegal immigrants on their coasts.

The EU appears weak, as they bend their policies to quiet down the Turks in the face of the majority of the population disagrees. Turkey should free the imprisoned journalists and make them strike article 301 where insulting “turkishness” is punishable offence. Above all make them accept the truths of the Ottoman Empire’s accountability for the Armenian Genocide. Until this is done, Turkey will continue to be known as “the sick man of Europe”.

The first win came in March, a deal with the EU, brokered by Germany, in order to stem the flow of refugees across the Aegean Sea.  The president however has shown little interest despite Turkey being on the threshold of winning visa-free travel to Europe for its citizens. Erdogan that he would refuse to bow to EU demands that reform terrorism legislation, one of 72 criteria Turkey will have to meet in order for the deal gain momentum.

“We will go our way, you go yours,” Erdogan said in a speech, directing it at the EU leaders.  “We are at a point of no return,” he said. “I am confident that a new constitution and all other requirements will institutionalize.” He added that this was not for his own ambition, but is “a necessity for the country”.