15 PROMINENT FIGURES OF THE ANTI-TRUMP MOVEMENT

15 PROMINENT FIGURES OF THE ANTI-TRUMP MOVEMENT

A surprising amount of well-respected Republicans are #NeverTrump

A surprising amount of well-respected Republicans are #NeverTrump

Influential politicians and prominent public figures in America are lining up to denounce the 2016 GOP nominee for President, Donald Trump.

Trump’s inflammatory rhetoric has been a source of controversy, as his comments against women, immigrants, and the entire religion of Islam are considered erratic and inappropriate by many. His nomination has caused a crisis in the Republican party, leading many republicans to instead support the likely Democratic nominee, former Secretary of State Hillary Clinton.

Leon Panetta, former Secretary of Defense and Director of the CIA

Panetta cautions against gambling on Trump. He just told CNN that “Trump is talking about the world in a way that takes us back to the 1930’s.” He spoke out against Trump’s “crazy positions” like “isolationism, America first,” and “distributing A-bombs around the world.” He says that the difference between Clinton and Trump comes down to the challenge of providing world leadership, implying that Trump simply isn’t up to that task.

David Petraeus, former Director of the CIA  and commander of forces in Iraq and Afghanistan 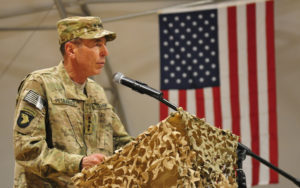 Petraeus wrote an op-ed for the Washington Post about the dangers of Trump’s anti-Muslim rhetoric, tactfully and without mentioning him by name. He spoke out against “blanket discrimination against people on the basis of their religion,” and not just on moral grounds. He said his concerns were also valid because, “those who flirt with hate speech against Muslims should realize they are playing directly into the hands of al-Qaeda and the Islamic State.” Instead of discriminating against and alienating Muslims, we should acknowledge that they are “the allies whose help we most need to win this fight [against extremist terrorism].” 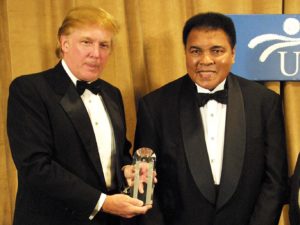 Former friend of Trump, Muhammad Ali spoke out against Trump’s idea of banning Muslims in the US shortly before he died. Known as a defender of civil rights for African Americans, and a proud Muslim, he reiterated in a statement called “Presidential Candidates Proposing to Ban Muslim Immigration to the United States,” that Islam was a religion of peace. He said, “Speaking as someone who has never been accused of political correctness, I believe that our political leaders should use their position to bring understanding about the religion of Islam and clarify that these misguided murderers have perverted people’s views on what Islam really is.” He also accused Trump, without mentioning him by name, of alienating people from learning about Islam and exploiting Islam for political points.

Rubio, Trump’s former direct competitor, has said after he dropped out of the race that he will support Trump. However, that support is apparently very conditional. Trump’s recent statements about U.S. District Judge Gonzalo Curiel being biased against him in the Trump University case due to his ethnicity have been decried by many as ignorant. Rubio is among them. He has come out against Trump’s statements on the judge in the Trump University case that “It’s wrong and I hope he stops…I don’t think it reflects well on the Republican Party. I don’t think it reflects well on us as a nation.”

Senator Sasse has called Trump out for his racism after Trump’s comments about the judge in the Trump University case. He tweeted that “Saying someone can’t do a specific job because of his or her race is the literal definition of ‘racism,’.” He was the first Republican in Congress to say he would never vote for Trump, though he wouldn’t support Clinton either. He thinks conservatives should opt for a hypothetical third option, saying “Why shouldn’t America draft an honest leader who will focus on 70% solutions for the next four years? You know…an adult?” He offered no concrete example of a viable alternative candidate though.

Flake is one of many who have opposed Trump’s statements about the judge in the Trump University case. He said to MSNBC that the comments were “disturbing” and a “new level” of offensive rhetoric for Trump. He said, “Because it’s not just … ill-informed or ignorant statements, but they suggest that when he’s president, you know, after November, that … perhaps he ought to go after that judge. That’s a whole new level. So that’s — it’s very disturbing.”

Gingrich, who was the Speaker of the House, House Minority Whip, a Member of the U.S. House of Representatives from Georgia’s 6th district, and a 2012 candidate for the GOP nomination, has decried Trump’s attacks on the judge in the Trump University case. He was a Trump ally, but he called Trump’s attacks “inexcusable” and “one of the worst mistakes” Trump has made. He said on Fox News that “He [Trump] is now the potential leader of the United States, and he’s got to move his game up to the level of being a potential leader.”

Salter has been writing essays against Trump since last July, saying “Are we in such dire straits that we must dispense with civility, kindness, tolerance and normal decency to put a mean-spirited, lying jerk in the White House?” In an article for Real Clear Politics, he brought forward the idea that Trump is bringing out the worst in Americans to satisfy his own vanity. He is supporting Clinton instead. 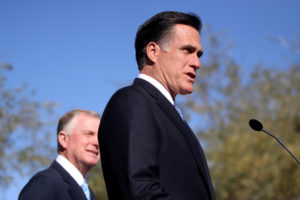 Romney gave a speech back in March calling Trump a fraud, a misogynist, and a threat to the country. When Trump became the nominee in May, he stuck to that position. He said “I see way too much demagoguery and populism on both sides of the aisle and I only hope and aspire that we’ll see more greatness.” He is also not supporting Clinton at the moment.

Mark Levin of the Mark Levin Show, was a Cruz supporter and is also “never Trump.” One of his reasons was due to the tactics of a Trump staffer, Roger Stone, who is often referred to as Trump’s “henchman.” When talking to Politico, he claimed the staffers were using “bully dirty tricks Nixonian tactics.”

Glenn Beck, the conservative media personality, host of The Glenn Beck Program, and founder of The Blaze, is #NeverTrump. Beck was a Ted Cruz supporter instead. Beck claims Trump isn’t a bona fide conservative, and that Trump winning the nomination provides a clear path for Clinton to the White House. He claims, “This is a crisis for conservatism,” and “there will once again be no opposition to an ever-expanding government.” He sees Trump as a dangerous figure, comparing him to Adolf Hitler circa 1929, when Hitler was just a “funny” character who “said the things that people were thinking.”

David Ross Meyers wrote an editorial for Fox News titled “A message for my fellow Republicans: If you back Trump you will not be trusted again.” His opinion is that Trump’s motivation for running for president is nothing but personal ambition. He says, “He [Trump] is exactly the kind of demagogue that our founders feared might try to seek the Presidency for his own personal gain.” Trump’s lack of judgment, character, and emotional stability make him an unacceptable choice for an office which would give him control of the US military and nuclear weapons. He says “The GOP, which has spent decades claiming to be the party of national security, should have been the first to declare Trump unfit for the presidency.” Trump’s attacks on core conservative principles like freedom of speech and religion are also problematic. Meyers acknowledges Clinton’s qualifications to be president, though he may disagree with her policies.

Charlie Baker, the republican governor of Massachusetts, told reporters at the Boston Globe back in March that he would not vote for Trump in November. He is holding to that position according to his statements in May to the New England Cable News NBC affiliate. He says his issues with Trump are primarily due to his temperament and statements against women, Muslims, and religious freedom. Though he won’t be voting for Trump, he has said that he has no plans to vote for Clinton either. He said, “I’ve certainly found this to be one of the most troubling election cycles,” Baker said.

Ben Howe, a popular conservative voice who is a contributing editor at the RedState blog, has come out against Donald Trump on Twitter. When it comes down to a choice between Trump and Clinton, he’s #ImWithHer. He addressed all the others who are #NeverTrump, urging them to accept the implication that they must vote for Clinton. Explaining his reasons for being anti-Trump, he wrote the following brief tweet:

Trump’s outrageous comments and irresponsible policy positions have led many prominent figures to come out against him. Among them are leading influential voices in American politics, including two CIA directors, two governors, three senators, and several prominent conservative media figures. Trump’s constant controversies many keep his image present in the news cycle, but ultimately it will lead to a clearer path to the White House for Hillary Clinton.