In yet another shocking display of unwarranted violence, ISIS (IS, ISIL or Daesh) has beheaded a teenage boy for listening to pop music.

Additionally, two other youngsters were shot dead for giving the traditional Friday prayers a miss, in the ISIS dominated city of Mosul in Iraq.

As reported by ARA News, the boy who was executed was only 15 years old and was listening to music in his father’s grocery store. He was spotted by Isis during their patrol. According to sources, the boy Ayham Hussein was listening to “Western music.” He was then referred to the Sharia Court, which declared the decision to behead him. The boy’s lifeless body was then given over to his family on Tuesday.

Interestingly, there were no earlier formal laws announced by the Sharia Court, which declared a ban on listening to Western music. Thus, this incident has shocked the people. It is also believed that this is one of the first cases of its kind in Mosul.

To add to this gory incident, Mosul also witnessed another show of extremism, where two young boys were arrested last Friday for not attending prayers at a mosque. After the Sharia Court declared that such an act would lead to execution, these two youngsters were shot dead outside the same mosque on Sunday.

ISIS violence in Iraq is reaching ever more disturbing levels. 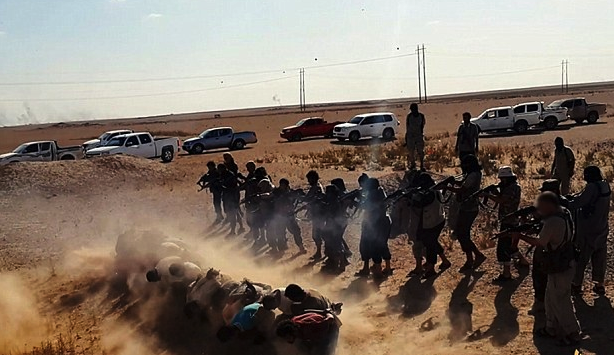 This is definitely not the first time that ISIS has caused wanton bloodshed in Iraq.

In May 2015, over 600 Yezidis were executed by ISIS militants in northern Iraq. “Without a direct intervention by the international community, Iraq will be witnessing more genocides against innocent people at the hands of the IS terrorists,” said Shahin Shingali, a combatant in the ranks of the Peshmerga army.

In fact, it seems like ISIS is prepared to kill and murder at the drop of a hat – even if it needs to kill some of its own fighters.

In December 2015, ten fighters who attempted to leave the battlefield and escape to safety were captured and tried for “high treason” by the Islamic State. After being declared guilty, these ten fighters were executed in Mosul city. They were beheaded mercilessly. Media activist Abdullah al-Mallah shared more details about the execution of Isis fighters, “The militants were found guilty for evacuating a post at the battlefront where clashes took place between them and the Kurdish Peshmerga forces. The Sharia Court of Mosul decided to behead them in front of hundreds of ISIS members in order to prevent others from taking such a move without the permission of their military leadership.”

This shocking news is yet another wake-up call for international leaders to unite and put an end to the violence perpetrated by extremist groups.

It is a crime against the Holy Qur’an and its messenger, as well as the exemplary life of the Prophet Muhammad. ISIS does not recognize the true meaning of Islam, which is peace and tolerance. A fatwa by 126 high-ranking scholars against the Islamic State and its inhuman and un-Islamic methods has been issued.