How the Americans voted him into the White House - Analysis & Numbers

How the Americans voted him into the White House - Analysis & Numbers

Against all odds – like a Black Swan Donald Trump made it into the White House.

He didn’t even get more votes than Clinton.

Hillary got more votes in the US presidential election than Donald Trump. She won the popular vote. 59.4 million people voted for her, with 59.2 million voting for Trump.

Anyone who wants to enter the White House must win more than half of the 538 votes, ie, at least 270. The “winner takes all” model ensures clear majorities, but at the same time the actual campaign only concentrates on about a dozen of the 51 voting regions. The remaining states are usually fixed one way or the other and do not require much campaigning.

He won Florida, Pennsylvania, Ohio, Wisconsin and North Carolina. Clinton won Virginia, Nevada and Colorado, but that was not enough to propel her to victory.

Unfortunately for Clinton and her supporters, the Electoral College system prevented her from winning, and she lost 279 to 228. This system is designed so that each state has an allocated number of Electoral College votes.

This is not the first time that this has happened.

Why the polls running up to the election were so wrong

A preliminary glance at exit polling data shows a stark racial divide – but the full picture is much more complicated, and offers clues to why polls were so badly off.

Many people are wondering who exactly Donald Trump has to thank for his stunning victory, among the 129 million voters.

The conundrum about this shocking victory is that all we have to analyse at the moment is exit polls, and it was polling that was so inaccurate through the campaign cycle. 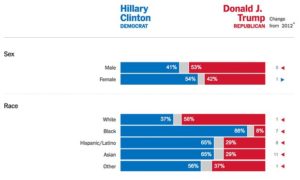 Perhaps this is not surprising for a candidate who was endorsed by the Klu-Klux-Klan. But what is surprising is that Trump was able to beat Romney’s numbers with minorities.

However, it is not prudent to categorise people into one demographic. An American voter is not poor or black or female or college educated, they are mixed into many different groups.

With that in mind, combining the numbers shows that Trump had a huge advantage in one demographic in particular. White voters without a college degree.

That group might also offer some clues as to why polls were so badly off. Analysts have found that the states where Republican support was underestimated correlate with the states with a large non-college-educated white share of the population.

Other factors include the millions of votes that went to third-party candidates, and overall lower turnout for Democratic voters.