A deal signed in Italy with tribes operating in southern Libya may be the last element of the barrier the EU has been constructing to exclude Africans from Europe. “To seal the southern Libyan border means to seal the southern border of Europe,” declared Italian foreign minister, Marco Minniti, following the signing ceremony in early April.

The deal, negotiated in secret with leaders of the Toubou and Awlad Sulaiman ethnic groups, holds real benefits for European politicians under pressure to halt the arrival of more African migrants and refugees. Minniti explained to the Italian newspaper La Stampa that:

The Libyan border guard service will be active all along the 5,000km [3,106 mile] long south Libyan border. And in the north, migrant sea traffickers will be dealt with by the Libyan coast guard which was trained by Italian experts, and which will be equipped with 10 motor boats from April 30.

The Libyan deal is the latest part of a barrier constructed to protect Europe’s soft southern underbelly – the Mediterranean. It may not be a physical barrier comparable to Donald Trump’s wall along the US-Mexican border, but it is nearly in place.

The routes that Africans have used in the past to reach Europe are fast being sealed. There is currently next to no transit by sea from West Africa through the Canary Islands. Just 144 people made it to Spain by this route between July and September 2016 according to the most recent statistics from the EU’s border force, Frontex. More crossed from the Spanish enclaves of Ceuta and Melilla on Morocco’s northern coast, but they numbered just under 3,000. 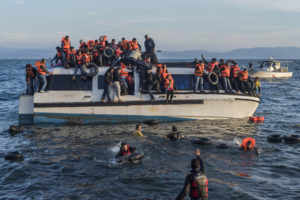 The route through the Sinai and Israel also has been closed. The brutal treatment of Eritreans and Sudanese in the Sinai by mafia-style Bedouin groups, who extracted ransoms with torture and rape, was certainly a deterrent in the past. But this route was fully sealed in December 2013 when the Israeli authorities built an almost impregnable fence, blocking entry via the Sinai.

Libya and Egypt have remained possibilities for migrants, but both are now becoming increasingly difficult to cross. The latest African Intelligence report from Frontex makes this clear.

Egypt became more attractive following the brutal killing and enslavement of Africans attempting to use the Libyan route. Many are Ethiopian and Eritrean Christians, who are subjected to the most appalling abuse by members of so-called Islamic State (IS).

But even Egypt has its drawbacks. As Frontex makes clear, many refugees dodge the authorities to avoid being forcibly repatriated to their countries of origin. This has left Libya – dangerous as it is – as one of the few viable routes into Europe. Blocking this has been critical to the success of the EU’s strategy, as a recent official assessment by the European Commission made clear:

Libya is of pivotal importance as the primary point of departure for the Central Mediterranean route.

This is why the deal signed in Italy is so important. As Frontex has explained, having the co-operation of the tribes in the area is vital if the route through the southern Libyan border is to be sealed:

The Tuareg and Toubou groups dominate the local human smuggling business thanks to the fact that their clansmen are spread on both sides of the border.

The Italian proposals are very much in line with agreements the EU reached with African leaders during a summit held in Malta, in late 2015. 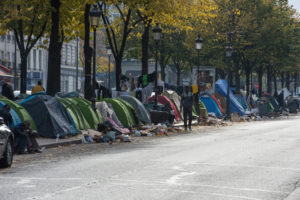 The two sides signed a deal to halt the flight of refugees and migrants. Europe offered training to “law enforcement and judicial authorities” in new methods of investigation and “assisting in setting up specialised anti-trafficking and smuggling police units”. The European police forces of Europol and Frontex will assist African security police in countering the “production of forged and fraudulent documents”.

This meant co-operating with dictatorial regimes, like Sudan, that’s ruler, Omar al-Bashir, is wanted for war crimes and crimes against humanity by the International Criminal Court. But al-Bashir is now seen as a friend to the West, despite his notorious record. One of Barack Obama’s last acts as president of the US was to lift sanctions against Sudan.

It is clear that Europe is determined to do all it can to reduce, and finally halt, the African exodus. But one point needs to be emphasised: the EU’s “wall” is by no means the only barrier Africans have to confront.

As Frontex makes clear, several African states have their own system of fences, or are planning to build them. These include the Moroccan wall (or “berm”) to halt the Sahrawis crossing from Algeria, as well as fences along the borders between Niger and Nigeria, Tunisia and Libya and a planned fence between Kenya and Somalia.

The obstacles confronting African migrants and refugees en route to Europe are becoming ever more severe.