The reclusive neighbor who turned into a monster

The reclusive neighbor who turned into a monster

The carnage in Dallas was in the end perpetrated by just one man. An angry recluse, we learn more every day about Micah Johnson that helps us understand why he did what he did.

The story of Dallas was confusing, as the news media had everything in real time, so we were able to watch the story develop. First it was two snipers, then four. Then it came out that they had arrested three suspects, but later all three were released, as they were not part of the plot. The story revolved around the fourth suspect, who was holed up in a parking garage. When the dust settled, the fourth suspect, Micah Xavier Johnson, age 25, was dead, and he was a lone gunman. Killed by a brick of C-4 explosive attached to a bomb disarming robot, we have come to understand some of what drove him to this horrible act, but mysteries still remain.

Micah Johnson was described by his neighbors as a bit reclusive. They also said that they saw no particular tendency toward racially motivated violence, and expressed shock and surprise when they found that he was in fact the Dallas killer. But as police searched his home and found bomb making equipment, there could be no doubt that he was clearly very different from what his neighbors thought. This was brought to light even more when police searched Micah’s social media. He had photos of him in a dashiki holding up a ‘black power’ fist. He had liked pages on Facebook that incited police violence, including the page called the African American Defense league, that advocated “sprinkl[ing] Pigs Blood”, or in simpler terms: killing police officers. It turns out that Micah Johnson was a follower of groups chronicling injustice against the black community, as well as hate groups. One of his friends spoke to CNN, saying that Micah repeatedly watched the Rodney King video tape, and studied the MLK assassination as well as studied Malcolm X in detail. The friend said Micah was “a good black man with a little bit of an anger problem”.

Looking back further, he was able to carry out these attacks with such efficiency due to his military training. He was a Private First Class in the Army reserves, and in May 2014, while on tour in Afghanistan, he was sent back to the United States due to an accusation of Sexual harassment by a female soldier. The case left him with an “other than honorable discharge”, a very unusual occurrence in these circumstances, since counselling is usually the first recommendation. In the end, Johnson was honorably discharged from the Army and settled in Mesquite, Texas.

During the attack, when he was holed up in the parking structure, Johnson expressed hate towards the officers, saying that he wanted to “kill white people, especially white officers”.

Following the raid which killed Johnson, police discovered that he had written something on the wall before he died. He wrote the letters “RB” on the wall. As of now, the meaning of this is unknown, bt theories reference “Righteous Blood”, a reference to a bible verse that says “Upon you may come all the righteous blood shed on the earth”. The letters may also stand for an unfinished RBG, or Red, Black, Green, the colors of the Pan-African flag, a prominent symbol of black power featured on the Facebook page of Johnson. We may never know what RB stood for, but given that Micah’s journal was filled with delusional ramblings, it may never actually matter what it means.

Regardless of the motivation, this act can never be justified. Attacking law enforcement with violence is never a way to solve a problem, as Micah Xavier Johnson found out, just as he was blown apart by a C-4 carrying robot. 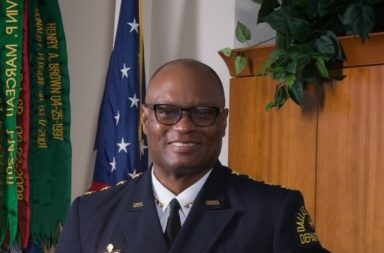