WHY DOMINICAN REPUBLIC WILL RE-ELECT DANILO MEDINA AS PRESIDENT

WHY DOMINICAN REPUBLIC WILL RE-ELECT DANILO MEDINA AS PRESIDENT

With only one month to go until presidential, congressional and municipal elections on May 15, 2016 in the Dominican Republic, the election campaign has entered into its final stage.

However, in spite of corruption charges against Danilo Medina´s ruling Party of Dominican Liberation (PLD) and a profound crisis of the judiciary spoiled by so called narco-judges, his re-election seems a sure bet.

With surprising stability President Medina maintains a comfortable lead of up to 30 percentage points over his principal challenger Luis Abinader, the candidate of the alliance between the Modern Revolutionary Party (PRM) and the Reformist Social Christian Party (PRSC). Even the least favorable poll concedes Medina a 49% victory over Abinader (44%) and rules out the necessity of a second round.

To a certain degree this probable outcome of the forthcoming presidential elections comes as no surprise. With three consecutive presidential terms (Leonel Fernandez 2004-2008 and 2008-2012, Danilo Medina 2012-2016) the ruling PLD has transformed itself into an almost official state party with omnipresence firmly entrenched in all institutions of the state including the judiciary. Continuous economic growth over the past decade and huge investments in infrastructure and tourism have laid the ground for Danilo Medina´s government to focus on what it labels an education revolution.

However, this revolution in fact has mixed results. Many new school buildings show defects or have not been completed on time. More serious are allegations that school meals provided to students often are of poor quality and have been contracted out to service providers with close ties to politicians of the ruling party. Clientelism also applies to the acquisition of school furniture. Education specialists also doubt that positive quantitative indicators will be matched by quality results.

While Danilo Medina proudly presents and defends the results of the educational revolution, health specialists deplore that the public health sector has been downgraded to secondary importance and drained of financial resources.

The precarious state of the health sector was highlighted during the Easter holiday period by the tragic death in a traffic accident of Claudio Caamano Grullon, constitutionalist combatant of the 1965 resistance against the US backed invasion of the country and the last survivor of constitutionalist ex-President Francisco Caamano´s failed guerilla expedition of 1973.

With several fractured ribs which had perforated his lungs, three public and private hospitals refused to accept 78-year-old Caamano for emergency treatment. His son had to drive around for hours until one clinic finally accepted the emergency patient.

However, with two liters of blood in his lungs the old gentleman´s life could not be saved anymore. This lamentable incident and the public accusations afterwards made by the Caamano family provoked widespread criticism directed at the government´s negligence in regards to the health sector. Significant numbers of claims were brought forward by ordinary citizens that clinics had refused to admit patients in emergency situations due to, allegedly, a lack of proper health insurance, advanced age or the statistical risk for the hospitals to increase the number of deaths in their emergency treatment.

The multi-faceted scenario of delinquency and corruption recently found its symbolic expression in the phenomenon of so-called narco-judges. Since a network of judges who traded sentences in drug related matters for money had been discovered in November 2015, the judiciary has to face increased numbers of charges of corruption and impunity. The latest case is the unconditional release decreed by an itinerant judge of five Venezuelan citizens who had brought 259 kg of cocaine in a small aircraft to La Romana airport and, as prosecutors contend, were captured in flagranti. The judge has temporally been suspended. In addition, other crime related issues, among them wide-spread intra-family violence often resulting in femicides, are being passionately debated by voters.

Surprisingly enough, the political opposition so far has not been able to capitalize on these issues. The PRM-PRSC alliance in the course of recent weeks had to face defections of dozens of middle level PRM militants who decided to return to their party of origin, the Revolutionary Dominican Party (PRD) now in alliance with the ruling party, or to directly join the PLD. Pre-electoral violence hit the PRM in March, when former rector of the Autonomous University of Santo Domingo (UASD), Mateo Aquino Febrillet, was fatally shot when trying to mediate in an internal party dispute over congressional candidacies in San Cristobal. In addition, Luis Abinader did not do himself any favors with the nomination of Carolina Mejia, ex-President Hipolito Mejia´s daughter, as his Vice-Presidential candidate, nor with an ill prepared interview with Jorge Ramos on the US based Univision TV channel.

While Carolina Mejia´s nomination, another manifestation of nepotism, estranged many PRSC members who do not feel adequately represented in Abinader´s team, the candidate´s promise to bring in ex-New York City mayor Giuliani to fight exploding crime is not being perceived as very original.

Emerging parties like the Alliance for the Country (AP) led by anti-corruption activist Guillermo Moreno and the Alliance for Democracy (AfD) with its female presidential candidate Minou Tavarez Mirabal with –according to a recent poll- 9% and 2% of the vote, respectively, have not been able to create sufficient momentum representing a serious threat to Danilo Medina´s re-election in the first round of voting. Both continue to reject calls to join the PRM-PRSC alliance.

Meanwhile, the ruling PLD has succeeded to avoid a formal split between President Danilo Medina´s majority fraction and ex-President Leonel Fernandez´s followers. Even the controversial electoral alliance with the PRD (both parties were founded by the first democratically elected President Juan Bosch), led by business man Miguel Vargas Maldonado, held despite of allegations by PRD members feeling shorted in regards to candidatures and future posts.

While a favorable outcome for Danilo Medina and his ruling PLD seems highly probable at this stage, the Electoral Observation Mission of the Organization of American States (OAS,) which will be led by ex-Colombian President Andres Pastrana, and missions by other international entities expected to arrive, like the Socialist International or the European Union, will have to play an important role in avoiding electoral violence, fostering sufficiently clean elections and elaborating recommendations in regards to the stalled project of a law on political parties and party financing. 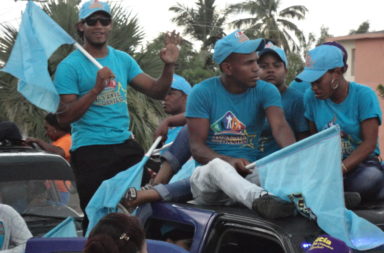 No Choice: A New Constitution in Venezuela, by Force