Trump moves the needle on the swing states, will this be enough?

Trump moves the needle on the swing states, will this be enough?

After a disastrous week for Clinton with the break of the new email scandal, her lead in the polls has tightened significantly.

The major difference in recent polling is Hillary’s loss of ‘leaning’ votes to either the toss up category or to Trump’s ‘leaning’ quota. This indicates many of the undecided votes are moving toward voting for the Republican candidate.

Trump trails Clinton now and would need 106 more projected electoral votes, whereas Clinton only needs 24 to win. This is still quite a dominant lead, however it is fading ever so slightly.

There is less than one week before the election, on November 8th, 2016.

These are the latest nation wide polling data from six sources: 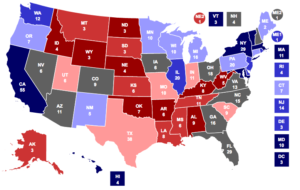 Wow, now leading in @ABC /@washingtonpost Poll 46 to 45. Gone up 12 points in two weeks, mostly before the Crooked Hillary blow-up!