The Islamic State (IS, ISIS, ISIL or Daesh) has issued 15 perverse rules how “owners” of female slaves are supposed to treat them, “Praise to Allah”.

The legal “Islamic” ruling, called Fatwa No 64, by the “State of Caliphate” includes detailed instructions about sexual relations.

Most of the female slaves are non-Muslim Yazidi women and girls. ISIS has captured about 12.000 Yazidis and 5000 of them are women and girls. They are raped and mistreated each day , and when you read this.

Four million people live now in the totalitarian state of the IS in Syria and Iraq.


These are the 6 most disgusting sex-rules of the IS for their sex slaves: 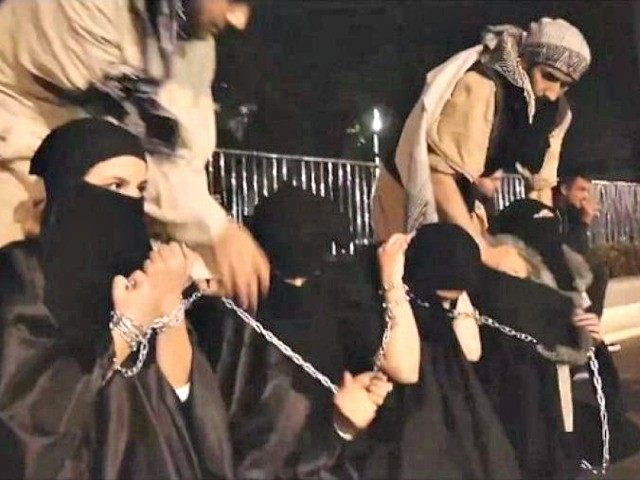 The Fatwa No. 64 was captured with other documents by U.S. Special Operation Forces during an operation in Syria. It is dated January 29th, 2015 and has now been in practice for one year. Below you may read the English translation. 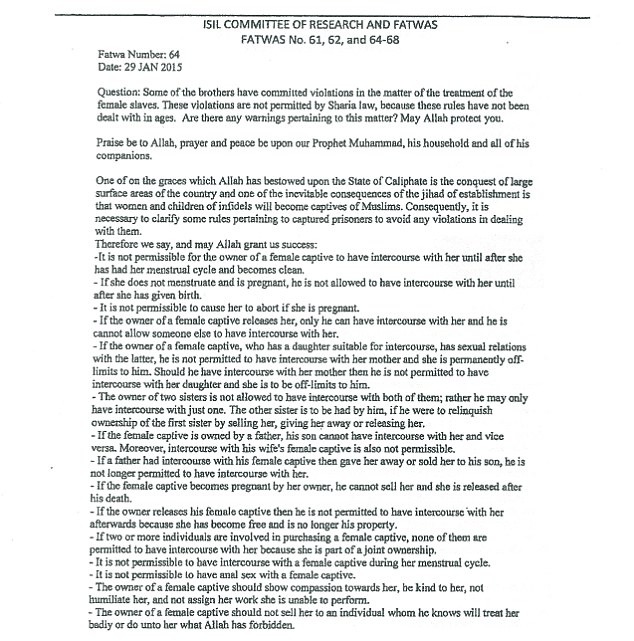 Fatwa No. 64, dated January 29 2015, issued by the ISIL Committee of Research and Fatwas

In this document  ISIS explains the need of the rules:

“Some of the brothers have committed violations in the matter of the treatment of the female slaves. These violations are not permitted by Sharia law, because these rules have not been dealt with in ages. (…) Consequently, it is necessary to clarify some rules pertaining to captured prisoners to avoid any violations in dealing with them.”


Be (a little) nice to your sex-toy-slaves as well! What a perversion of Islam and macho-style!

According to a report by CNN October 8, 2015 ISIS soldiers raped women „to make them Muslim“. They interviewed the 22-year-old Yazidi woman Noor (not her real name) who was also sold into slavery:“ He showed me a letter and said ‘This shows any captured women will become muslim if 10 ISIS fighters rape her.’ There was a flag of ISIS and a picture of Abu Bakr Al Baghdadi.“ After this fighter raped her, she was passed to 11 of his friends who did the same to her.

The ones who could escape from their tormentors are traumatized and scarred for life. In interviews they spoke about sexual slavery, forced marriages, rape and even executions.

Women and girls who escaped IS told Amnesty International what they’ve gone through.

For example the 16-year-old Yazidi girl Randa who lived near the Mount Sinjar with her family. Most of them were abducted by IS, even her heavily-pregnant mother. She was „sold“ or given as „gift“ to a man twice her age who raped her. Randa said to Amnesty International:“ It is so painful what the did to me and to my family. Da’esh (IS) has ruined our lives… What will happen to my family. I don’t know if I will ever see them again.“


Another girl is Arwa (15) who could manage to escape together with her 13-year old cousin. She was held in many different places in Syria and Iraq. And this is what she told Amnesty International :“ In Rambussi we were held in a house with five other girls. There they did to me what they did to many other girls. I was raped. My cousin was not molested; they wanted to take her to marry her to a man but in the end they left her with us and then we managed to escape. (…)“

ISIS don’t even spare pregnant women. The 19-year-old Abla was pregnant when they abducted her. She said:“I had my little boy with me and my pregnancy was very visible already but one of the guards chose me to be his wife. He said that if I did not consent to marrying him he would sell me on to another man who would take me to Syria. I let him believe that I would marry him and managed to run away before he could carry out his threats.“

ISIS “Caliph” Al Baghdadi is himself a pervers sex-monster and the opposite to Prophet Muhammad, who treated his women well.

The treatment of women and the bizarre rules to treat female slaves have nothing to do with the rules in the Qur’an and the Hadith of the Prophet, which promote to release slaves, and treat all women and all people with respect. The Qur’an and its message, as well as the exemplary life of the Prophet Muhammad are full of compassion, the virtue of tranquillity, and harmony (hilm) and peace (salam). This truth has been forgotten by the members of ISIS. Read all arguments in the legitimate fatwa by 126 high-ranking scholars against the Islamic State and its inhuman and un-Islamic methods.


GLOBALO has sent a team to talk with non-Muslim Yezidi and Christian women in Iraq. Still today, many are raped, punished, beaten, forced into “marriage” and sexual slavery with fighters of the Islamic State.

One film is about Meriam. A young christian woman who lived with her family in Mosul. But when IS took over the city they had to leave home together with 100.000 other Christian families. Now she is fighting to provide education, shelter, and food to the refugees. See our GLOBALO film here.

This film is about a Yazidi family who lost their father and faced the cruelty of the IS. Watch the  GLOBALO clip here.