Fresh off the heels of a lifetime of zero international diplomacy experience and an entire career in the oil and gas industry, Rex Tillerson is having a great first day in office.

With his dubious (to say the least) qualifications to be selected for the highest diplomatic job in the United States, Trump’s pick was confirmed in the Senate by a vote of 56-43, despite the fact that his former company has extremely lucrative financial investments in Russia.

Congratulations to Rex Tillerson on being sworn in as our new Secretary of State. He will be a star!

While the Senate was busy anointing this man who Putin personally awarded Russia’s Order of Friendship (the highest honour in Russia) to Secretary of State, the House was up to something perhaps even more nefarious.

This is a bipartisan amendment to the 2010 Dodd-Frank Act, which sensibly requires oil and gas companies that are listed on American stock exchanges to formally disclose any payments made to overseas governments in regions where they operate. 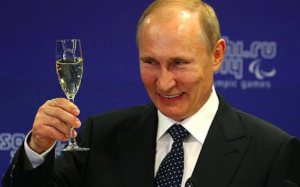 This is a fairly obvious and necessary anti-bribery measure designed to stop a particularly disreputable industry engaging in untold corruption. Coincidentally, Tillerson’s former company, Exxon Mobil, happened to be one of the major drivers behind a successful lobbying effort to get the house to repeal it.

Michigan Republican Representative Bill Huizenga was a main proponent of rolling back this rule.

“In reality, this very flawed rule is diverting precious resources not only from the SEC, but more importantly resources from American companies that could otherwise be used to create jobs. Despite being instructed in federal court, the SEC continues to propose a resource extraction rule that is overly burdensome, puts US companies at a competitive disadvantage and fails to provide investors with useful information”

Due to the obvious lack of logic with the statement above, it might come as no surprise that opponents are saying he is acting on behalf of an industry with an extremely strong lobby. Indeed Huizenga’s campaign received $46,050 in recent contributions from the oil and gas industry.

This vote comes on the heels of the Republicans attempting to gut the Office of Congressional Ethics, a nonpartisan congressional watchdog, with a vote to strip the agency of its powers.

“The American people have a right to know where Big Oil is drilling and who they’re paying, especially if it involves countries that have been hostile to the United States. Striking Section 1504 would mean that Big Oil companies like ExxonMobil would be able to continue their questionable dealings with corrupt parties such as Vladimir Putin and Russia.”

I opposed Rex Tillerson for Secretary of State because I questioned his ability to put U.S. interests above ExxonMobil

Tillerson’s confirmation meant that he must legally cash out with Exxon Mobil, meaning he received a $180 million severance package, and on top of that, he is selling an additional $54 million in stock. Its not out of this world to imagine that after forty years with Exxon he won’t be at all tempted to help out his old friends next time he is sitting down with Putin discussing drilling rights. 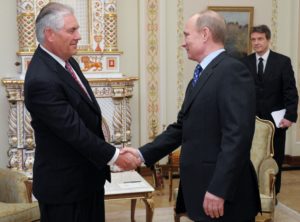 If anyone was watching, or could do anything about it, it would typically be quite a bold move by Trump to both elevate the former CEO of America’s largest oil and gas company to Secretary of State on the very same day that legislature is passed relieving oil companies of the requirement to disclose financial payments to the very countries with which he will be dealing.

It’s clear this administration does not have much shame, and you can add this to the long list of shameless kleptocratic developments.