In the fight to regain Iraq's second largest city from the hands of the terror group, many factors are in play.

In the fight to regain Iraq's second largest city from the hands of the terror group, many factors are in play.

Iraqi forces are beginning their final offensive to clear ISIS forces from western Mosul. They are using artillery and airstrikes to combat the defences set up. ISIS responds with suicide bombs and exploits its tunnel networks and also activates sleeper cells in the city.

Previously, ISIS had the option of falling back into the other side of the city when the Iraqi military advanced in the east, but now they will be bottled up as escape routes across the desert and toward Syria have been blocked off. This means they will have to choose between death and surrender, making this battle even harder.

Compared to the two-month conflict over the eastern side of Mosul, the battle for the west appears to be even tougher. Satellite imagery shows that ISIS’s defences are more entrenched here and the maze of alleys in the old part of the city makes it impossible for armoured vehicles and tanks to enter.

But in the Iraqi Special Forces’ favour, they gained invaluable experience in the east. One sergeant in the Counter Terrorism Force said that his unit had stopped using vehicles and had advanced by night on foot, taking ISIS fighters by surprise.

Iraqi Federal Police and the 9th Armoured Division have recently taken Mosul’s airport, to the south of the city – preparing for a ground based attack. ISIS had heavily fortified this region with roadblocks and berms and has turned the airport runway into trenches. Iraqi military reported that a hill to the south, which overlooks the airport, had also been taken, their first target.

Iraqi forces inside Mosul airport – IS responding with mortars. Roadside bombs across the area pic.twitter.com/zXys2134VJ

US airstrikes have targeted ISIS operations within the city, bombarding its headquarters in the five-story Bab Sinjar building on February 17. Airstrikes are also targeting ISIS mortar positions and other command centres.

Now there are fewer choices for the civilians caught in the crossfire. All the bridges linking east and west Mosul have been destroyed. The other option is to escape to the south, through the fighting.

But basic supplies are running short, The UN Office for the Coordination of Humanitarian Affairs (OCHA) says, “Available food and fuel supplies continue to dwindle, with residents resorting to burning furniture and rubbish to keep warm. Markets and shops have closed, running water is scarce and electricity in many neighbourhoods is either intermittent or cut off.”

The battle for Eastern Mosul expelled 180,000 civilians at its peak, but there were well-established camps set up beyond the city limits. In the west the situation is less manageable, and the OCHA says here is space prepared for around 60,000 displaced people.

The Iraqi army will have to deploy many of the special forces units that took the eastern neighbourhoods. Doing so will leave holding forces left behind who are less experienced and less disciplined. This will make dealing with the civilian population who are starting to return home more difficult.

A wave of suicide bombs has plighted eastern Mosul since ISIS fighters were driven back. Eleven people were killed in one attack on a restaurant on February 10, sleeper cells are a constant worry in an area very large to police.

Iraqi special forces have begun an assault against ISIL on a sprawling military base south of Mosul https://t.co/HcwpLSehtE pic.twitter.com/EoPXa0qK4R

Once the battle is won, focus will run to reconstruction and reconciliation. Large areas of eastern Mosul have been devastated by the war, burned-out vehicles litter the streets, thousands of homes are rubble, and much of the infrastructure is ruined. This is likely to be the same in the west.

Security and adequate services need to be restored in order to persuade people to stay, but this will likely cost the government billions – before the actual cost of war is considered. 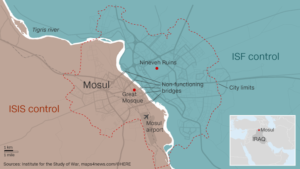 There is no agreement yet as to how to govern Mosul once liberated. It rests on an ethnic and sectarian fault line where Kurdish, Sunni, Shabak, Christian and Turkmen groups all vie for influence in the eventual vacuum. The Kurdish Peshmerga forces are already prepared to draw a new border for their region.

Kurdish officials worry that once Mosul is liberated from ISIS, US interest in the region will decline. Diplomatic stamina was crucial in bringing and keeping together the Iraqi and regional Kurdish governments.

Analyst Michael Knights, who has long experience working with the Iraqi military, says continued US involvement is critical. “US forces should commit to at least three more years of extraordinary security cooperation,” to solidify the hard-won gains in Mosul and elsewhere.”

The liberation of Mosul theoretically could provide a template for sharing power and resources in Iraq, but history dictates that this will be much harder in practice. Falling oil prices and corruption have hindered efforts to put Iraq back on its feet.

Even if ISIS is pushed out of Mosul, its roots in Iraq will remain, as they will revert to what they were before, an insurgency force living amongst Sunni populations in Iraq. 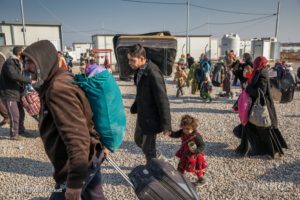 The Institute for the Study of War — which monitors the security situation across Iraq — says ISIS is “returning to traditional … terror tactics outside of its efforts to govern and hold cities.”

One Kurdish intelligence official, Lahur Talabani, said last week that even if ISIS disintegrates, “another group will pop up under a different name, a different scale. These next few years will be very difficult for us, politically.”