Why so many Homeless in rich San Francisco?

Why so many Homeless in rich San Francisco?

My View from Norway

My View from Norway

My dream has come true! I am moving to San Francisco! I screamed.
I will never forget how excited I was about moving to San Francisco, all the way from little Norway. As an exchange student I would be living a half year in the city that I had heard only good things about. San Francisco is known for being completely unique. It is a conglomeration of different cultures, liberal attitudes, great cultural offerings, great restaurants with food from all over the world, and beautiful architecture –  only to mention a few things.

Many people say that the city is different than the rest of the cities on the west coast of America, and that it reminds them of Europe. Maybe that is why I feel so at home here. Maybe that is why I only have positive things to say about the city that I now live in, and the city that I have learned to love so dearly. But there is one factor that makes me realize the big difference from little Norway to big America, and that factor is homelessness.
San Francisco is a relatively small city with around 800.000 inhabitants. The rent prices are sky high and there is limited space for residential development. The housing market is among the most expensive in the whole world, which forces more and more people out of the market and out of the society. As much as 1.5 percent of the society is homeless, which means around 12.000 people. That is as much as three times the population of Carmel-by-the-sea! If Norway had as big a share of homeless people as San Francisco, as many as 90.000 people in Norway would have no home.
As we walk out of the restaurant,  full after the nice dinner and a bit giggly after two glasses of wine, we are yet again talking about how amazing it is to get such a nice meal for just $30. If this were Norway, the bill would would have easily been $80. A couple of doors next from us, someone lies on the ice cold ground under a blanket. Wrapped up in the blanket so that it is in fact hard to tell  whether or not the person is alive. A little further down the street a man stumbles in circles, haunted by demonic voices. From the other side of the street we suddenly hear someone shout ”I’m gonna cut your knees off, you better watch out!” He shouts out at the sky with no one there to receive his call.

Although curiosity urges us to stop and stare, we pretend we didn’t hear it. Others walk by as if nothing has happened.
Inside Starbucks a guy walks in, holes in his shoes, pants hanging down. He takes a plastic spoon and fills it with milk from one of the cans at the bench by the door, and slurps the few drops of milk. Suddenly he shouts, ”Where is my cake?”. But he hadn’t ordered any. 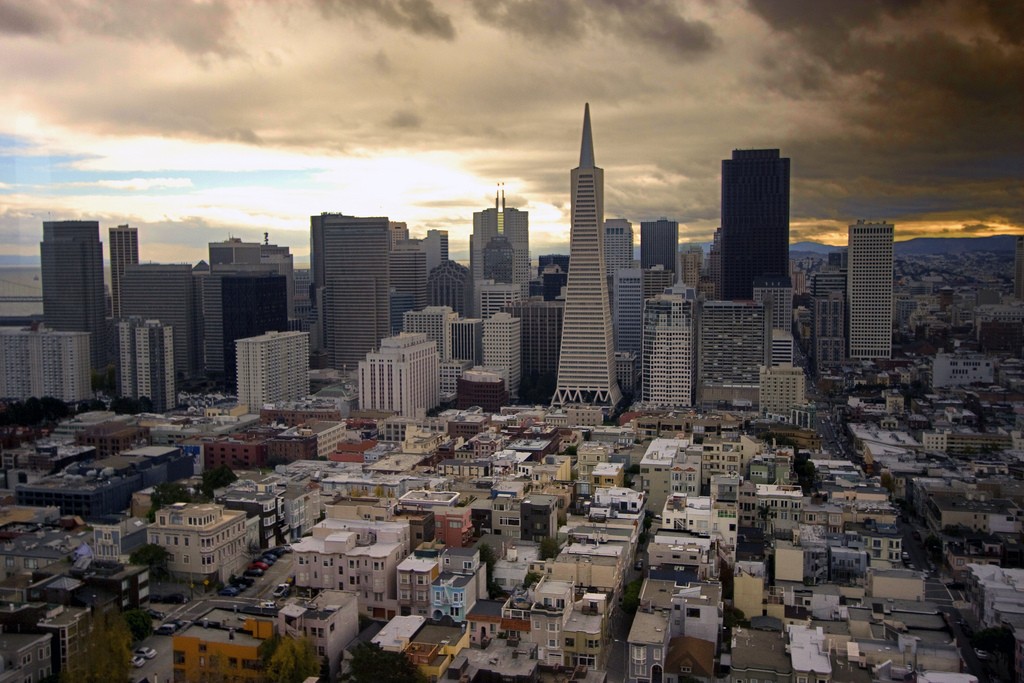 “Even as tech companies open up more and more offices down town, the poor are getting poorer.” Picture: Tony Webster/flickr

The contrast between rich and poor here in San Francisco is dramatic. There is simply not enough housing for everyone. Even as  tech companies open more and more departments down town, the poor are getting poorer – as in the rest of America. Not many days ago, a homeless camp in San Jose was dismantled. Like David Vossbrink, the city’s communications director, was quoted in a New York Times article: “It is one of the paradoxes of our region’s economic success, this housing shortage”.
One of my first impressions of the homeless people around here is that they are louder than I am used to. In Norway there are a few drug addicts. In Rome you only see people sitting quietly by themselves, arm stretched out with an empty coffee cup, hoping to get a coin or two. There are some of these quiet types here too, but many are shouting out into the night sky. Screaming. Shouting for people.Calling for help. Maybe they are getting high on other drugs than in Norway, or maybe Americans in general are more outgoing and loud than Norwegians. No matter what their reason is, help isn’t coming, no matter how loud they shout scream.
One-third of the homeless people in San Francisco suffer from severe mental illness, according to various studies. In the 1960s when Ronald Reagan was governor of California, several mental hospitals were shut down. This forced people out on the streets. Many of them need treatment just as much as they need a home. Why won’t the politicians and the state help them?  They need  medication and treatment, not to be left alone on the streets.
In 2010, when the Affordable Care Act (ACA), better known as Obamacare, was enacted, one of its promises was that the poor were going to be able to buy insurance. Government owned-and-operated healthcare systems for the population were going to be set up. A more united support that gives people equal rights was going to come.
As Dean Baker writes for the Huffington Post, ACA “not only insured millions of uninsured people, but it freed tens of millions of workers from dependence on their employers for insurance. This is especially important for workers who have serious health conditions or have family members with serious health conditions.”
This is an important step in the right direction. Although not everyone sees it this way: many republicans argue that people should work for their own fortune and that we do in fact all have equal rights.

But that is easy to say for someone coming from a privileged background. What about those who have no chance to pay for their kids to go to school? What if you are a war refugee struggling with mental post-traumatic stress disorder, you hardly know any English at all, working overtime to make ends meet. Can a rich republican really understand what life is like under such circumstances?

Really, what it comes down to is one simple question: whose life is worth most? It should be an easy question to answer, but unfortunatelly, as a society, we seem incapable of doing so. Too many are quite comfortable with their own situation and they don’t want things to change.
Equal rights also means having equal oportunities, especially regarding education. But what if a family can’t afford sending their kids to school? According to San Francisco Chronicle “overall of the 54,000 students in the system, one in 25 — or 4 percent — is homeless.”  For these students, a secure and steady childhood is a distant dream.
Norway is built upon different principles. Individualism is not as strong as in the United States. One of the consequences of this is higher taxes.
Norway has a welfare system that gives everyone the right to free education, maternal leave for a year, sickness benefits and free health care – to mention a few things. In fact, sometimes one might get the impression, that things are too easy for Norwegians. One can get aid almost too easy and it’s easy to become lazy when you can just lean back and get money from the government. Many people think that Norway could thus  catch the  Dutch Disease and see its productivity erode.

For an entire generation of young Norwegians, never having to work hard for anything, isn’t as much fun as it might sound at first. One out of five youths in my homecountry batteling depression. Humans need meaning and dignity to achieve happyness. Relying on the social safety net is not the best way. But at the same time it is this very aid that saves us from having as many homeless people as there here, in San Francisco.
Some people argue that the welfare system we have in Scandinavia would never work in a big country like the United States, but I disagree. With political will, everything is possible.
The housing prices in Norway have also risen sharply in recent years, just like in San Francisco. When I see the results here in San Francisco, I get even more worried about my home country. Of course there are many factors behind this development in San Francisco, like rent control. But at the same time we know for sure that in the western part of Oslo, which is known as the richest part of the city, the average person lives 10 years longer than on the east side of Oslo. That is where  a lot more immigrants and economically less fortunate people are living. This trent is saddening. Especially since we have the health care system in place, that  is supposed to prevent such divergence from occuring. What then about the countries that don’t even have a walfare system? How can they even out differences like this?
I think it’s time to see the bigger picture.  It is  time that the situation for homeless people changes. As was the case with Obamacare, what’s missing here is not knowledge, it is political will. Leaving an untreated person alone wandering the streets, searching for food and stalking doorways for shelter, is not an acceptable definition of freedom.
As I now sadly have to return to Norway after the semester is done, I know I will miss San Francisco a lot. I will miss all the great things I’ve come to love about this city: the people, the food, the opportunities, the houses and the city. But one thing I know I will appreciate even more when I get back is the welfare system we have in Norway. We take care of the weakest in our society  and this is something I am truly proud of.