HOW BERNIE BECAME A REAL THREAT FOR HILLARY

HOW BERNIE BECAME A REAL THREAT FOR HILLARY

Hillary Clinton was the Democratic Candidate – Who could ever stop her?

Now this happened in Iowa. The lady was far ahead for months, but at the very end – almost lost.

In yesterday’s Iowa caucus, Bernie Sanders pulled off a remarkable feat. He virtually battled Hillary Clinton to a draw.

The same Hillary Clinton that up until recently had been viewed by most pundits as the only option for the nomination.

As a matter of fact, the only reason why Clinton won was because luck favored her in three actual coin tosses that were held in precincts where the candidates had either gotten the same amount of votes, or where there were issues counting the votes due to the complicated Democratic caucus system.

Had Bernie only won two of those coin tosses, he and Hillary would have won the exact same number of precincts and the caucus would have ended in a tie.

Why Sanders’ campaign is gaining momentum

A new ad from Hillary Clinton, released shortly before voting began in Iowa, claims that she is the only most likely candidate to win the general election. Bernie Sanders, however, has interesting numbers to share.

While recently speaking at an American Legion hall in Iowa, Sanders declared, “”My opponent says this is an important issue; she is the person who can win the general election. I respectfully disagree. Look at which candidate is doing better against Donald Trump. Look at the last national poll and you find that Bernie Sanders is beating Donald Trump by 13 points, Hillary Clinton by seven points.”

At Toledo, during a rally on last Friday, Sanders also shared a recently released poll from New Hampshire that hoisted him by greater margins than Clinton, in fact, by several more points in most cases. He was more favored than virtually all of the GOP candidates in hypothetical general-election match-ups. According to an NBC News/ Wall Street Journal poll, Clinton leads Sanders among potential voters by a meager three points.

Sanders claimed that if his campaign was objectively compared to that of Clinton’s, it would be simple to see which one was more powerful. He said, “Our campaign is the campaign that has the energy, has the enthusiasm. So Hillary Clinton is right, electability is enormously important, and we are the campaign that’s going to win this election.”

In fact, many believe that Sanders’ candidacy deserves much better publicity and coverage, yet it is the more flamboyant candidates who are stealing the show. Stuart Stevens, who earlier worked as strategist for Mitt Romney, tweeted, “Trump is smothering the attention Sanders should get. He is historic. A socialist most liked candidate? Amazing.”

Not startlingly, a new New York Times/ CBS News Poll claims that Clinton’s national lead over Sanders is quickly thinning. According to the survey, 48 percent of nationwide Democratic primary voters support Clinton, while 41 percent endorse Sanders. This possibly suggests that if Sanders managed to step his game up, he could potentially overtake Clinton. But with lesser funds and nepotistic privileges, Bernie Sanders would probably need to use a novel strategy to win the election game.

How Sanders’ heritage can propel him to victory

Bernie Sanders as potential President would be a strong statement about how America belongs equally to all of its people, of all origins and backgrounds. While attempting to understand Sanders’ political capacity, it is important to consider how his cultural heritage has helped shape his political interests.

If Donald Trump is being blasé about his strong hatred for immigrants, Bernie Sanders is at the other end of the spectrum. Though it has not yet been portrayed in popular media, Sanders is the face of what generations of industrious immigrants could achieve and contribute to America. Sanders, like many other politicians, is known to be a strong critic of inequality and discrimination, but what makes him different from the rest is that he has been at the receiving end of discrimination himself.

In June 2015, during an interview broadcast by NPR, host Diane Rehm had wrongly suggested that Sanders was a dual US-Israeli citizen. Sanders did not appreciate this, and went on to correct the host. He claimed it was “nonsense that goes on in the Internet.”  He continued, “I honestly don’t know but I have read that on the Internet. You know, my dad came to this country from Poland at the age of 17 without a nickel in his pocket. He loved this country. I am, you know, I got offended a little bit by that comment, and I know it’s been on the Internet. I am obviously an American citizen, and I do not have any dual citizenship.”

If utilized right by his media and publicity team, this narrative of Sanders’ history could possibly catapult him into becoming the next iconic President, with the feel-good element of America assimilating well the descendants of immigrants who sought refuge in the country.

Several decades ago, a 17-year-old Jewish boy migrated from Poland to America, after his parents were killed in the Holocaust. Eli Sanders then went on to earn his living in his new home country, eventually marrying Dorothy Glassberg, with whom he had a son in 1941. As this infant grew up into a young boy in Brooklyn, he learnt his first lesson about politics at a very tender age. The seed of political curiosity had already been sown in the young Bernie Sanders, who later explained, “A guy named Adolf Hitler won an election in 1932 … and 50 million people died as a result … what I learned as a little kid is that politics is, in fact, very important.”

Sanders completed his schooling in Brooklyn, and went on to study at Brooklyn College, before moving to University of Chicago, where he earned a degree in political science in 1964. Sanders was highly effective as a civil rights activist throughout his time at college. While studying here, Sanders spearheaded a rally which protested the segregationist housing policy espoused by the university president, George Wells Beadle. Sanders mobilized the support of 32 other comrades, entered the University of Chicago administration building, and camped outside the president’s office. This is touted to be Chicago’s first ever first civil rights sit-in. Expressing his disapproval about the segregation, Sanders had then said, “We feel it is an intolerable situation when Negro and white students of the university cannot live together in university-owned apartments.” Pressurized by the protests, Beadle eventually initiated a commission to probe discrimination.

It was but a natural progression for Sanders to enter mainstream politics. He began his political affiliation in 1971, as a member of the Liberty Union Party. After resigning from the party in 1979, he ran for mayor of Burlington in 1981. This was a stroke of dazzling success, as Sanders defeated Democrat Gordon Paquette, and was re-elected thrice thereafter – in 1983, 1985 and 1987.

A staunch believer in the benefits of socialism, Bernie Sanders is presently serving his second term in the U.S. Senate after clinching victory in the re-election in 2012, grabbing 71 percent of the vote. In May 2015, Bernie Sanders declared his candidacy for President of United States at Waterfront Park in Burlington. He began his announcement with, “This is an emotional day for me.” As the crowds heartily cheered, he said, “Today, with your support and the support of millions of people throughout our country, we begin a political revolution, to transform our country economically, politically, socially and environmentally.”

But the battle to victory isn’t as straightforward as it seems. Being a Democrat, Sanders will have to outrun Hillary Clinton in the elections – which as everyone knows, could be a herculean task in itself.

How Iowa and New Hampshire can change everything

From the start it was clear that, if Bernie Sanders wants to have any chance at defeating Hillary Clinton for the presidential nomination, he would have to do well in both Iowa and New Hampshire. This is because such a head start would suddenly turn Sanders into the centre of attention, with the media and potential funders taking a strong interest in him. This would give him the necessary resources to accelerate his campaign for the other states, especially those with more racially diverse voters – where Sanders would have to work harder to convince them to choose him over Clinton, who is widely believed to be a more popular choice.

It is reasonable to consider Iowa close enough to a win for Bernie. If the polls are to be trusted (which we often can’t) he will likely take New Hampshire. And Hillary will find herself amidst a real fight – again.

However, such a win would not magically change Hillary Clinton’s popularity with the Democrats. Yet, it could launch a plethora of possibilities for Bernie Sanders – if he can actually defeat Clinton in New Hampshire and succeed in receiving better press coverage and finances, then becoming President could still be possible. After all, Clinton was defeated by an underdog in 2008, wasn’t she?

To put things into perspective, FiveThirtyEight’s Harry Enten underlined that it is too early yet, to decide which candidate can emerge winner in the race to presidential nomination. In 2015, he wrote, “We just don’t know what the most important issue will be at this time next year,” explaining how there could be various changes to America’s socio-economic fabric, which could affect which candidate remains the people’s favorite.

Bernie Sanders’ official website for the presidential campaign declares, “They have the money, but we have the people. If everyone who visits this website joins this movement, there’s nothing we can’t accomplish together.” 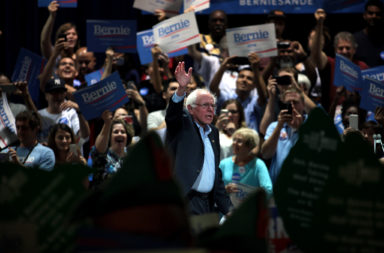 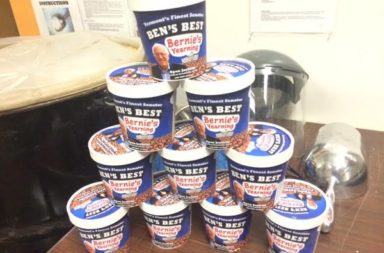