BRITAIN IS LEAVING: WHAT HAPPENS NEXT?

BRITAIN IS LEAVING: WHAT HAPPENS NEXT?

A potential dissolution of the UK is looming.

Brexit has caused the British pound to drop to a 31-year historic low and financial markets are in crisis.

EU officials are calling for the UK to initiate Article 50 immediately in order to make a quick exit.

A petition for a second Brexit referendum has reached 1 million signatures, which is more than enough for the issue to be discussed in Parliament.

In a very tightly contested referendum, it went back and forth all night, with the Brexit supporters initially having no faith in a win, to the night turning around and choosing to leave. Just after polls closed, UKIP leader Nigel Farage said that he had spoken with advisers who told him that the leave campaign would likely lose, yet as the sun rose over the UK, announcements showed that to be false, much to the surprise of many across the world.

The first effects of the decision will be economic. London’s stock market plunged upon opening today, and the British pound has already plunged by 9% against the dollar and nearly 13% against the yen.

Global markets have been hugely affected, with the German DAX falling 10% on early trading. The FTSE 100 was down 7%, with British banks facing losses of more than 25%. The Asian markets fell around 3% wiht the Japanese Nikkei falling almost 8%, and the to round it out,  the DOW dropped 500 points. Due to the expected financial instability, credit rating agencies have announced that they may even downgrade the UK’s credit rating.

To add insult to injury, the Pound has fallen so much that the UK has dropped from being the world’s 5th largest economy to 6th, being eclipsed by France.

PM David Cameron has promised that the UK will invoke article 50 of the Lisbon treaty, meaning there will be around a two-year time period in which the UK and EU will agree on the terms of the departure.

While Cameron will step down by October since he was in the Remain camp, until that time he will act as caretaker. Cameron has clarified that he “remains the Prime Minister and will carry out the instructions of the British people” for the time being. According to Cameron’s address this morning, a new prime minister will be making the decision on when to trigger article 50 of the Lisbon treaty.

Since over half of Britain’s trade is with the EU, Cameron’s main task going forward is ensuring economic stability for the UK, including currency stabilization, laying groundwork for brand new trade relationships and treaties, and keeping investments flowing into British industry.

In the longer term, the departure could lead to the UK becoming more like Norway. As part of the EEA but not the EU, Norway still contributes to the EU’s budget and allows free movement of people. The other option, which would harm the economy more, is to opt-out completely and trade with the EU through the World Trade Organization the way that countries like the US do.

Why is the UK leaving?

According to Reuters, turnout for the referendum was 72.1 percent after all of the 382 counting areas reported turnout. 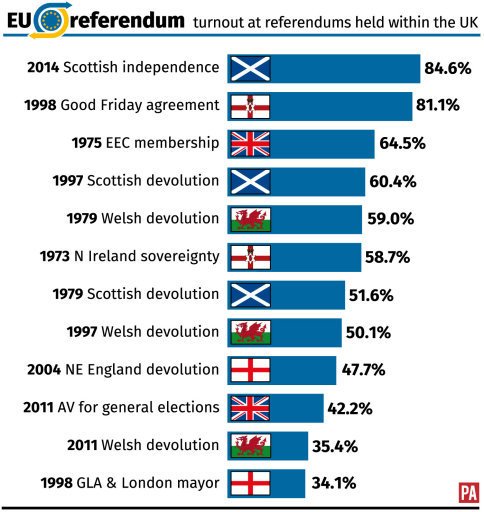 In 1975, there was a referendum to leave the EEC trade group, which is now the EU, only two years after joining. While they chose to stay due to the trade benefits in the 70s, it seems Britons are no longer willing to bear the burdens of membership, like strict trade regulations, EU budget contributions, and the strains of free migration from elsewhere in the EU. The current referendum has now fulfilled Cameron’s 2013 pledge to hold a referendum on EU membership.

The European Commission’s Jean-Claude Juncker has said that a Brexit will not result in greater concession from the EU to convince Britain to remain. He said, “There will not be any kind of renegotiation. We have concluded a deal with the prime minister, he got the maximum he could receive, we gave the maximum we could give. So there will be no renegotiation, not on the agreement we found in February, nor as far as any kind of treaty negotiations are concerned.”

What are the sides?

The Vote Leave campaign is now victorious over the Stronger In campaign.

The Stronger In campaign believes that “Britain is stronger, safer and better off in Europe than we would be out on our own.” Many economists, political leaders, and 48.1% of the British public agree. Conservative David Cameron, Labour party leader Jeremy Corbyn, and George Osbourne, the Conservative UK chancellor of the exchequer, were all supporters of remaining.

The Vote Leave group, in contrast, sees the Brexit as an opportunity to “take back control and … spend our money on our priorities.” 51.9% of voters chose to leave, as well as former London mayor Boris Johnson, prominent Labour party lawmaker Kate Hoey, and the right-wing UK Independence Party (UKIP). Evidently, Boris Johnson wasn’t expecting to be successful on the eve of the results coming in.

The head of the WTO, Roberto Azevedo, has said that leaving the EU will cost Britons an extra $13.2 billion in import tariffs, and all of the UK’s trade will now have to be negotiated.

US President Obama has already said that a Brexit will not alter the “special relationship” between the UK and the US, though it may push the UK to “the back of the queue” on trade deals with the US.

The non-partisan think tank, Institute for Fiscal Studies, has said that Britain could be facing two more years of the austerity measures which originally started in response to the 2008 recession. They said, “On the basis of estimates by NIESR, the effect could be between £20 billion and £40 billion in 2019–20, more than enough to wipe out the planned surplus. In the long run, lower GDP would likely mean lower cash levels of public spending.”

The Bank of England’s governor, Mark Carney, says that the consequences of Brexit could include a technical recession. They have released a statement saying that they are exploring contingency plans and working closely with HM Treasury, and that the bank plans to meet all its responsibilities for monetary and financial stability.

The IMF agrees that the effects will be negative, saying the impact of the economy could either be “pretty bad” or “very, very bad.” George Osbourne, the U.K.’s chancellor of the exchequer, said the country will be permanently poorer and the UK economy could shrink by 6%.

The future of the EU

There are fears that the Brexit will cause EU member countries to leave the bloc, which has been economically weaker since the global recession of 2008 and the recent migration crisis. European Council president Donald Tusk warns that the EU will have to respond to a growing euroscepticism in the union. He posted on Twitter, “Whatever the UK vote is, we must take long hard look on the future of the Union. Would be foolish to ignore such a warning signal.”

The Brexit might be the first step to undoing decades of European integration.

Countries likely to explore the option to leave include the Netherlands, France, Italy, Sweden, and Denmark. The referendum votes have revealed that Northern Ireland and Scotland are far less eurosceptic than England and Wales, which may lead to further referendums since they’re being pulled out of the union with the rest of the UK.

In the Netherlands, Geert Wilders, Chairman Party for Freedom (PVV) and Member of Parliament, tweeted that it’s their turn next:

Hurrah for the British! Now it is our turn. Time for a Dutch referendum! #ByeByeEUhttps://t.co/kXZ0aQtgmx

Italy’s Northern League is starting a petition calling for a referendum of their own. Their leader, Matteo Salvini, said, “This vote was a slap in the face for all those who say that Europe is their own business and Italians don’t have to meddle with that.”

In English: “Victory for freedom. As I’ve been saying for years, we must now have the same referendum in France and other EU countries.”

The coming years will redefine the UK’s place in the world.

In the short term, the UK will now face financial instability, a contracting economy, and a new Prime Minister. The new PM will be the one to trigger Article 50 and work with the EU on the terms of the UK’s exit, as well as negotiating all new trade deals. We will see Scotland consider another Independence referendum, since ties to the EU were a significant part of the promise made by England to keep Scotland in the UK. There are rumors that Northern Ireland will examine some form of independence referendum, or maybe will unify with the rest of Ireland. Regardless of what actually happens, the next two years will bring chaos and uncertainty in Europe and will drastically affect the UK and Europe’s economy.