Can Canada's Healthcare System Be Used as a Model for All?

Can Canada's Healthcare System Be Used as a Model for All?

Just how healthy is their vaunted healthcare system?

Just how healthy is their vaunted healthcare system?

Canada’s health-care system is a point of Canadian pride. We hold it up as a defining national characteristic and an example of what makes us different from Americans. The system has been supported in its current form, more or less, by parties of all political stripes — for nearly 50 years.

Our team at the Queen’s University School of Policy Studies Health Policy Council is a team of seasoned and accomplished health-care leaders in health economics, clinical practice, education, research and health policy. We study, teach and comment on health policy and the health-care system from multiple perspectives.

While highly regarded, Canada’s health-care system is expensive and faces several challenges. These challenges will only be exacerbated by the changing health landscape in an aging society. Strong leadership is needed to propel the system forward into a sustainable health future.

In 1968, the National Medical Care Insurance Act was implemented, in which the federal government agreed to contribute 50 per cent toward the cost of provincial insurance plans. In 1984 the Canada Health Act outlawed the direct billing of patients supplementary to insurance payments to physicians.

The five core principles of the Canadian system were now established: universality (all citizens are covered), comprehensiveness (all medically essential hospital and doctors’ services), portability (among all provinces and territories), public administration (of publicly funded insurance) and accessibility.

The quality of the Canadian health-care system has been called into question, however, for several consecutive years now by the U.S.-based Commonwealth Fund. This is a highly respected, non-partisan organization that annually ranks the health-care systems of 11 nations. Canada has finished either ninth or 10th now for several years running.

One challenge for Canadian health care is access. Most Canadians have timely access to world-class care for urgent and emergent problems like heart attacks, strokes and cancer care. But for many less urgent problems they typically wait as long as many months or even years.

Patients who require hip or knee replacements, shoulder or ankle surgery, cataract surgery or a visit with a specialist for a consultation often wait far longer than is recommended. Many seniors who are not acutely ill also wait in hospitals for assignment to a long-term care facility, for months and, on occasion, years. 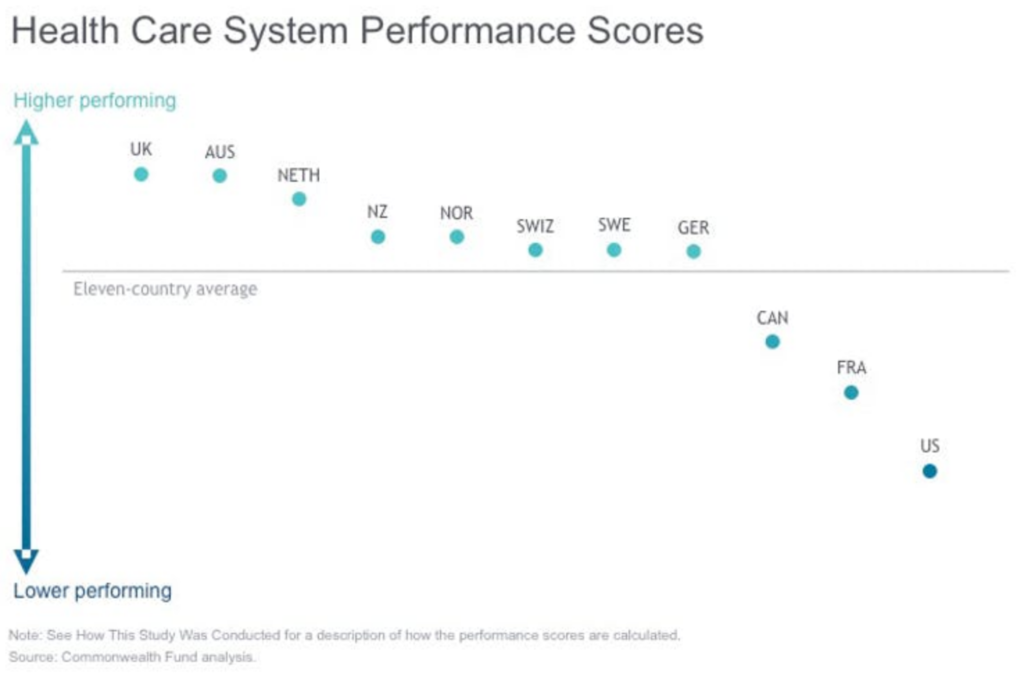 And it’s not just accessibility that is the problem. Against measures of effectiveness, safety, coordination, equity, efficiency and patient-centredness, the Canadian system is ranked by the Commonwealth Fund as mediocre at best. We have an expensive system of health care that is clearly under-performing.

First of all, successive federal governments have been effectively reducing their cash contributions since the late 1970s when tax points were transferred to the provinces and territories. Many worry that if the federal share continues to decline as projected, it will become increasingly difficult to achieve national standards. The federal government may also lose the moral authority to enforce the Canada Health Act.

A second challenge has been the increasing cost of universal hospital insurance. As economic growth has waxed and waned over time, governments have increased their health budgets at different rates. In 2016, total spending on health amounted to approximately 11.1 per cent of the GDP (gross domestic product); in 1975, it was about 7 per cent of GDP.

Overall, total spending on health care in Canada now amounts to over $6,000 (US$4,790) per citizen. Compared to comparably developed countries, Canada’s health-care system is definitely on the expensive side.

Canada’s aging population will apply additional pressure to the health-care system over the next few years as the Baby Boom generation enters their senior years. In 2014, for the first time in our history, there were more seniors than children in Canada.

The fact that more Canadians are living longer and healthier than ever before is surely a towering achievement for our society, but it presents some economic challenges. On average, it costs more to provide health care for older people.

Actions we can take now

Health-care stakeholders in Canada still function in silos. Hospitals, primary care, social care, home care and long-term care all function as entities unto themselves. There is poor information sharing and a general failure to serve common patients in a coordinated way. Ensuring that the patient is at the centre — regardless of where or by whom they are being served — will lead to better, safer, more effective and less expensive care. Investments in information systems will be key to the success of these efforts.

Those who serve Canadians for their health-care needs need to transition to accountability models focused on outcomes rather than outputs. Quality and effectiveness should be rewarded rather than the amount of service provided. Alignment of professional, patient and system goals ensures that everyone is pulling their oars in the same direction.

We know many factors influence the health of Canadians in addition to doctors’ care and hospitals. So why does our “universal” health-care system limit its coverage to doctors’ and hospital services? A plan that seeks health equity would distribute its public investment across a broader range of services. A push for universal pharmacare, for example, is currently under way in Canada. Better integration of health and social services would also serve to address more effectively the social determinants of health.

Bold leadership from both government and the health sector is essential to bridge the gaps and break down the barriers that have entrenched the status quo. Canadians need to accept that seeking improvements and change does not mean sacrificing the noble ideals on which our system was founded. On the contrary, we must change to honour and maintain those ideals. Our leaders should not be afraid to set aspirational goals.