Deutsche Bank has come under fire for several scandals of late, and a new one adding fuel to the fire is their lending of hundreds of millions of dollars to Donald Trump, with the potential for suspicious connections to Russia held within.

The bank is currently under investigation by the US Department of Justice over aiding Russian money laundering – a troubling potential conflict. It’s now in question whether the loans to Trump – which were agreed in highly unusual circumstances – were backed up by guarantees from Moscow. Trump and his immediate family are Deutsche clients. 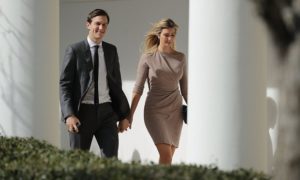 The bank examined accounts held by Ivanka Trump, the president’s daughter, her husband, Jared Kushner, who serves as a White House adviser, and Kushner’s mother.

Deutsche Bank are not saying directly whether the review found any links to Russia or not, however the internal review found no evidence of loans being underpinned by Russia. The bank is coming under pressure to instate an independent auditor to review its cloudy business relationship with Trump.

@realDonaldTrump It’s not fake news when foreign banks such as Deutsche bank start to investigate your account for Russian links.

Democratic congressman Bill Pascrell Jr, a member of the House Ways and Means committee, said: “We know that Deutsche Bank is a major lender to President Trump, and the firm is also currently undergoing scrutiny by the Department of Justice for alleged misconduct.

“I think it’s important for the American people to know the extent of the bank’s involvement with the president, and whether there is any Russian involvement in loans made to Mr Trump.”

Pascrell said he would encourage Deutsche to “shine a bright light” on its lending to the president to “eliminate any speculation of wrongdoing ”. Congress should also be allowed to review Trump’s tax returns in closed session, he added.

The bank has “double-checked” its records after Trump’s election victory and has received multiple media enquiries about recent Trump loans that appear unusual amongst banking circles.

Trump now owes Deutsche around $300 million, including four large mortgages all issued by Deutsche’s private banking arm. These loans are guaranteed against other properties that Trump owns.

Deutsche Bank had been the only financial institution to lend Trump significant sums as other Wall Street banks closed their doors on him after his business declared bankruptcy four times.

In 2008, Deutsche sued Trump after he failed to pay $40m out of his $640m real estate loan, but Trump countersued claiming that Deutsche had contributed to the global recession and therefore in turn had a hand in depressing property prices. Trump demanded $3bn in damages.

Sources in the banking world have expressed astonishment that Deutsche would continue lending to Trump in the wake of his $3bn 2008 lawsuit.

The bank dismissed Trump’s lawsuit as frivolous and the pair settled in 2010.

Slowly but surely after that the bank and Trump rebuilt their relationship through Deutsche’s private banking arm.

In December Deutsche agreed to pay the US Department of Justice $7.2bn. The fine related to the mis-selling of residential mortgage-backed securities and other activities during 2005-7. The US originally asked Deutsche to pay $14bn.