Is This The End Of Democracy In Turkey?

Is This The End Of Democracy In Turkey?

With an incredible history of turbulence, Turkey is looking down the barrel of a vote against democracy

With an incredible history of turbulence, Turkey is looking down the barrel of a vote against democracy

Turkey is approaching a critical juncture in its long-term political development. Irrespective of the outcome, the country’s April 16 referendum, which proposes changing the constitution to concentrate power in the hands of the president, heralds a new political era.

Many signs seem to point to a narrow victory for President Recep Tayyip Erdoğan in his attempt to establish an executive presidency a la Turca, but the result is not a foregone conclusion.

Should Erdoğan’s suggested reforms be rejected, Turkey’s near future would be defined by its president’s next move. Without a formal shift in constitutional structure, Erdoğan could resort to nefarious means to consolidate his grip on power. Alternatively, given his long-standing ambition to establish what we call a “constitutional Erdoğanistan”, he might simply pause briefly before attempting a second bite at the cherry.

Turkey on the brink

Turkey has a strong parliamentary system with a prime minister as its head. The referendum proposes to abolish the role of prime minister and replace it with an executive presidency. A major shift like this is something that has only happened a handful of times since the republic was founded in 1923 according to renowned historian of Turkey, Erik J. Zürcher. 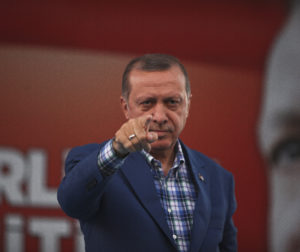 The country’s political system has already undergone significant economic, social, and political changes since the Justice and Development Party (known by its Turkish acronym AKP) came to power in 2002. The AKP was an eager champion of legal reforms relating to Turkey’s EU candidacy and accession starting in 2004. And in September 2010, it successfully shepherded changes aimed at bringing the constitution into compliance with EU standards.

Still, were the Turkish people to vote “yes” on April 16, the changes would be fundamental and irreversible. The referendum proposes 18 amendments that will abolish nearly 70 years of multiparty parliamentary government, moving Turkey away from the core norms of a pluralist, parliamentary state of law by reducing the separation of powers and the checks and balances system, among other changes.

Erdoğan’s aim is to transform the country into a majoritarian authoritarian system centred on one man. What Turks are risking is nothing less than “democide” – the scholarly term for voting to abolish democracy itself.

Since the birth of the Turkish Republic in 1923, Turkey’s parliament, the Grand National Assembly of Turkey, has been the place where national sovereignty resides.

In the early republican period, it was dominated by the party of modern Turkey’s revered founding father, Mustafa Kemal Ataturk (1881-1938). Since the transition from single-party rule to a multiparty democracy in 1946, the parliament has been the crucial institution in the political life of the country.

Turkey is voting on its future in Sunday’s referendumhttps://t.co/jhDguasrpu pic.twitter.com/TqnQQyeYlk

Elected lawmakers have long shared power with strong guardians of institutions such as the military, the judiciary and Turkey’s government bureaucracy – all Kemalist-dominated – in a kind of hybrid political system not unlike that of contemporary Iran, Thailand, Pakistan and Myanmar.

The parliament has also served as the site where governments have been formed, thrown out of office and restricted.

As the scholar of Turkish constitutional development Ergün Özbudun notes, “even at the height of Atatürk’s prestige, the Assembly rejected a proposal to give the President of the Republic the power to dissolve the Assembly”.

Under Erdoğan, the AKP has worked through the parliament to legitimise its rule. By 2010, it had vanquished the last Kemalist bastions within the state thanks to successive landslide electoral victories and a now-defunct strategic alliance with the Gülenists (members of a Muslim-organised educational community who follow the US-based Islamic cleric Fethullah Gülen).

Since then, Turkey has been a weak electoral democracy, with the power of the National Assembly slowly eroding. A “yes” victory in the April 16 referendum could permanently diminish the authority of this venerable institution.

The authoritarian style Erdoğan has in mind for the future was already on display during the referendum campaign itself.

Erdoğan’s tone has been aggressively nationalistic and populist. He compared European countries’ criticism of the campaign with the attempts of the Allies to dismember Turkey at the end of the first world war, for instance. And he promised to reinstate the death penalty after the referendum.

In the first ten days of March, the government allocated television airtime to various parties to promote their positions on the referendum. The president saw 53.5 hours in newscasts, and the governing AKP was granted 83.

Meanwhile in #Turkey:
Websites being blocked ahead of referendum by government https://t.co/O9jiovYOk3

A March 2017 report from the Organisation for Security and Cooperation in Europe confirms that state officials have leaned heavily on the scales to support the “yes” campaign. By occupying the bully pulpit of the presidency, with all the resources of the government along with privileged access to media at its disposal, the “yes” group has had an overwhelming campaign advantage.

Turkey’s referendum this Sunday is a crucial moment: “The Turkish case shows us that time does not necessarily go forwards” says @Elif_Safak pic.twitter.com/Qm7nxJiGoO

If Erdoğan prevails in the April 16 referendum, the plan is to hold presidential and general elections together in 2019. Were he to win these, Erdoğan would be eligible to serve two additional five-year terms, allowing him to stay in office until 2029. His previous terms in office (2003-2014) would not count toward the two-term limit.

As president, by current law, Erdoğan had to resign from his party and officially assume a politically neutral stance.

But under the new rules, he could rejoin the AKP, which, according to opposition parties, will abolish any chance of impartiality. The proposed amendments also make it harder to remove the president from office.

The proposed changes will grant the president wide-ranging powers to issue binding decrees with the force of law. And even though these will be subject to judicial review, the president himself will appoint most of the judiciary.

With his new presidential powers, Erdoğan would also be enabled to indefinitely extend the current state of emergency that was put in to effect following the failed July 2016 coup against him.

Despite the uneven playing field, surveys show that the referendum race is tight, and Erdoğan could be defeated.

Currently, both the opposition Republican People’s Party and pro-Kurdish People’s Democratic Party are advocating a “no” vote in the referendum. DİSK, a left-wing trade union body, and numerous other NGOs and civil society groups have also come out against the proposed changes.

A narrow loss on April 16 would be a blow to Erdoğan, but it is unlikely to kill his ambition. He is expected to simply regroup and try again, including by renewing the state of emergency that gives him wide-ranging authority to continue bypassing parliament. Such a move would allow for continued purges of those deemed in opposition to the government, including Kurdish groups and Gülenists.

This is Erdoğan’s modus operandi: to foment and instrumentalise social crises to centralise power. After the 2013 Gezi park protests against urban development in Istanbul developed into a wider movement against the regime, for example, the government severely clamped down on individual rights, including media freedom. Erdoğan claimed that Gezi protesters and their supporters were a threat to the national will.

The president used a similar argument to banish the Gülen movement, deemed a terrorist organisation since May 2016.

Thus, rather than stabilise the situation, a “no” vote is likely to induce further volatility in Turkey. Erdoğan can be expected to quickly introduce a new package of “constitutional reforms” – a move that would require either a national crisis or a new “enemy of the Turkish people” as a pretext.

Rhetorical attacks on Europe are likely to intensify. Earlier this year, charges of Nazism levelled against Germany, and criticism of interference in campaign rallies by Austria and the Netherlands, were widely cheered in Turkey, giving Erdoğan every incentive to double down on the EU animosity if he loses his referendum.

In a sense, no matter who prevails on April 16, Erdoğan may remain undefeated.

What does Sunday’s constitutional referendum in Turkey mean for the country? pic.twitter.com/xhEyq1DO6p