Evangelicals - No Longer a Political Force in the USA?

Evangelicals - No Longer a Political Force in the USA?

Ideologies of the religious right will always appeal to some of the American electorate, but the goal posts are now moving

Ideologies of the religious right will always appeal to some of the American electorate, but the goal posts are now moving

Anyone who has been reading about how evangelical Christians were “crucial” to Donald Trump’s victory in November 2016 would probably be forgiven for assuming that the US’s religious right still wields enormous clout, whether as a political bloc or as a bulwark against secularisation.

They would be mistaken. It seems that, after nearly 40 years of religious conservatives leading the right, the parishioners they depended upon so heavily have accidentally raised a generation of sceptics and progressives. And there are plenty of other signs all pointing in one direction: the religious right is in decline.

For starters, we know that Americans as a whole routinely over-report their religious activities. While Gallup polls regularly report that around 40% of Americans claim to attend church every week, more robust studies show the actual proportion to be closer to 22%. If over-reporting church attendance comes so naturally to so many Americans, it’s not much of a leap to presume that a substantial portion of poll respondents are overstating their piety.

Studies also show that some Americans are starting to become braver about describing themselves as unaffiliated to any church or faith. In 2008, the American Religious Identification Survey found that the number of Americans claiming no religious affiliation (often called “nones”) had almost doubled since 1990, from 8.2% to 15%. It was no temporary dip, either. The Pew Religious Landscape Study, which tracked changes between 2007 and 2014, found that the number had increased to almost 23%. The losses weren’t evenly distributed: declines were steepest among Catholic and mainline Protestant denominations, while evangelicals showed only slight losses.

Furthermore, the word “evangelical” has now grown to encompass wings of several mainline Protestant denominations and even, to a smaller extent, some Catholics. As the term has become harder to define, tracking where those losses come from may prove to be increasingly difficult. The fact still remains, however, that the “nones” (the vast majority of which are first-generation) have been on the rise and tend to be progressive. While the relative youth of the group on average meant low voter turnout in 2016, they represent a demographic that could soon match the religious right vote-for-vote as participation rates increase with age.

The oft-cited statistic that 80% of white evangelicals voted for Trump certainly appears to indicate the continued vitality of the religious right – but look closer and the data tell a different story.

Firstly, that statistic relies upon exit polls, which carry the same self-reporting problems as the polls mentioned above. Secondly, let’s not forget that around 42% of the American electorate didn’t vote in the election. If roughly the same proportion of self-identifying evangelicals joined those staying home, and only 80% of those that voted did so for Trump, then that would mean fewer than half of evangelicals voted for him.

If that seems outlandish, note that the word “evangelical” doesn’t describe a homogeneous conservative bloc. The liberal wing of evangelicalism (yes, it exists), whose voice was drowned out by the hard-right Moral Majority in the 1980s, has recently began to reassert itself in front-line politics.

Progressive evangelicals even published an open letter condemning Donald Trump’s “racial, religious and gender bigotry”, during the election, seeking to distinguish themselves from “the media’s continued identification of ‘evangelical’ with mostly white, conservative, older men”.

Give these progressives a little time, and the phrase “evangelicals in politics” may one day evoke pink knitted hats and income inequality protests.

Leaving the data aside, the starkest evidence that organised conservative religious politics is losing its vigour has been the response to several religiously motivated policies. 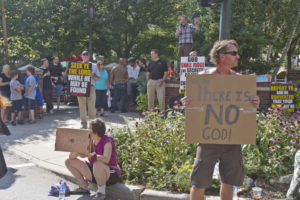 One of the more infamous is Indiana’s Religious Freedom Restoration Act, which was passed in March 2015. Presided over by Trump’s vice-president, Mike Pence (then governor) and touted by religious conservatives, the act drew fierce opposition from critics across the US, who pointed out that it would allow private businesses to discriminate against LGBT citizens. It proved so unpopular that the state of Indiana lost US$60m in revenue from businesses that withdrew or cancelled expansions in the state.

But the ultimate example of recent years is surely North Carolina’s notorious “bathroom bill”, introduced and passed by religiously motivated conservative legislators. That policy, which paints transgender individuals as bathroom predators, has cost North Carolina $630m, not least from businesses boycotting the state while the bill remains in place.

These backlashes are not just Change.org petitions circulating in progressive Facebook groups. They are real, tangible consequences, spoken in a language Republicans can understand.

Various Trump administration policies have already met with the sort of opposition that a strong religious right could have helped fend off. Top of the list is the recent “Muslim ban”, which originally favoured Christian immigrants – the poorly implemented order almost brought some airports to a grinding halt as they filled to the brim with protesters.

And while the Christian foot-soldiers Trump might have been counting on have failed to materialise, progressive people of faith are reportedly building a national network to hide undocumented immigrants from the administration’s harsh crackdowns.

These are not the actions of a pious public respectfully nodding from the back pew. Enough Americans have reached a consensus on what fair play looks like, and this new resistance is willing to take to the streets to fight for it.

Of course, the ideologies of the religious right will always appeal to at least some of the American electorate. But, at the end of the day, this is a game of coalition politics – and this particular team simply doesn’t have enough friends to keep playing for much longer.